The Lure of a Long Trail: Planning a Thru-Hike (Part 3 of 4)

In the third of four columns on planning a thru-hike, Triple Crowners — hikers who have completed the Appalachian Trail, Pacific Crest Trail, and Continental Divide Trail (that’s nearly 8,000 miles of trail) — offer advice to first-time thru-hikers on how to stay safe and have fun. 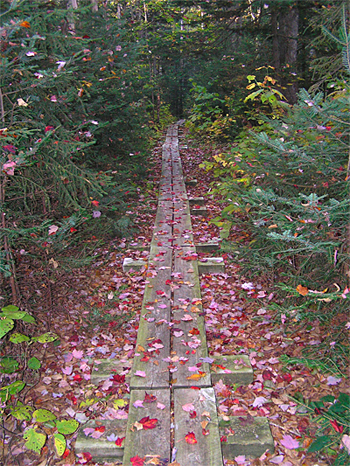 A bog bridge on the AT in Vermont. (Photo courtesy of Laurie Potteiger and the ATC)

You’ve bought your gear, made peace with your parents (or said good-bye to your children), toughened your muscles, and prepared your mind for five to six months of backpacking through some of America’s most beautiful scenery. And ever since you announced your intention of hiking the Appalachian Trail, Pacific Crest Trail, Continental Divide Trail, or another long-distance trail, you’ve been inundated with advice on how to survive and succeed.

Oddly enough, much of the advice comes from people who have never spent more than a weekend in the wilderness. And those who do have experience tend to get all dreamy-eyed and offer such profound statements as “the journey is the destination” or “the reward outweighs the sacrifice” or “the hike isn’t over until you say it’s over.”

Now, those last three remarks come from thru-hiking Triple Crowners Jackie McDonnell, David Rainey, and Scott Williamson, so they really do mean something. But more on that later.

Meanwhile, on the way to reaching this depth of understanding, the first-time thru-hiker has to deal with the matter of putting one foot in front of the other, day after day, while not getting lost or going crazy.

Here’s some of the very practical advice offered by experienced backpackers that doesn’t necessarily show up in trail guides and on websites.

1. Know your trail. Figure out ahead of time how many miles you need to walk each day to finish before the snow flies (or at least before it piles up deep enough to obscure the trail). On the AT, plan to start out slowly and then pick up speed. The steepness of the trail takes almost everyone by surprise. But on the PCT, plan to start fast, zip from water source to water source, and get across that desert before it gets too hot. The CDT also calls for a fast start. 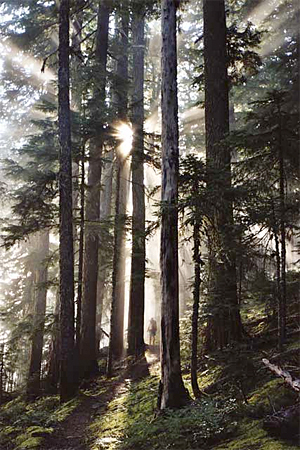 On the PCT in central Oregon. (Photo courtesy of Ana Gipe and the PCTA)

2. Take care of your body. Some people need to rest on a “zero day” once a week for the first few months, while others take zero days only if they’ve built up enough extra mileage that they can afford the luxury. The uphill portions may seem harder, but it’s the downhill sections that wear out your knees, tendons, and ligaments. Stop and take care of your feet at the first sign of a “hot spot” before it becomes a blister. And when you have blisters, take the time to treat them — antiseptically.

3. Don’t take chances that can end your trip prematurely. There’s a reason so few thru-hikers are killed or seriously injured on the trail — it’s because they’re careful. For the Sierra or Rockies, buy that ice ax, and maybe crampons as well, and learn how to use them. Treat your water. Stow your food away from bears.

4. The AT is a blazed trail, so it’s hard to get lost (though not impossible). In comparison, many sections of the PCT can be confusing, and the CDT demands solid map and compass skills. Don’t rely on GPS. Read the guidebook(s) carefully, but recognize that they may have errors or the trail may have changed. Always be aware of your surroundings.

5. If you are on a trail, but you realize it’s the wrong trail, do not go cross country or shortcut to get back to the right trail. Backtrack to where you started from and then get on the correct trail.

6. Be alert to where you are and what’s happening around you. If things don’t look quite the way you expected them to, then stop. If you have indeed strayed off your route (which can happen very easily in snowy areas), return to a point where you know where you are. Then calmly work out the correct route.

Now, to get back to those pearls of wisdom from the Triple Crowners quoted above.

The journey is the destination. 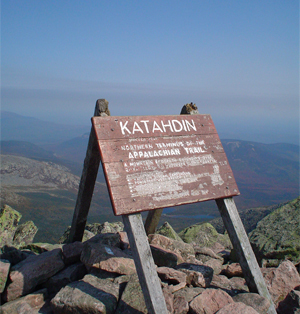 Maine’s Mount Katahdin marks the northern terminus of the AT, but it’s not your true hiking destination. (Photo courtesy of Isaac Wiegmann and the ATC)

There are going to be some bad days, days filled with frustration, discomfort, and loneliness. In fact, there might be a lot of days like that. Keep in mind why you’re walking all that way and not just buying an airline ticket.

Here’s what Jackie McDonnell (aka Yogi and the author of Yogi’s PCT Handbook and Yogi’s CDT Handbook) has to say:

“So you’re going to hike the AT from Georgia to Maine! Woohoo! That’s great! Maine is not your destination. If you really want to go to Maine, then you could just get in a car and drive there. If you really want to go to Maine, you wouldn’t take five months to walk there and start on a rainy day in Georgia. You’re out here for the experience, for everything that happens in between Georgia and Maine. Embrace that. It’s a very powerful concept.”

The reward outweighs the sacrifice.

You can’t know what to expect, says David Rainey (trail name Pineneedle). But you can cultivate the habits of mind that enable you to deal with everything that happens, good or bad, knowing that wonderful things lie ahead.

These habits of mind include flexibility, perseverance, and paying attention to your instincts. The bad times are temporary. The diversity and novelty of experience, scenery, and people along the trail are constants. “Something around the corner, over the next hill, or in the next town will change your perspective,” says David.

The hike isn’t over until you say it’s over. 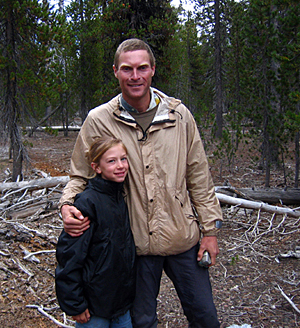 Legendary and record-setting hiker Scott Williamson is the first person to complete a PCT yoyo — Mexico to Canada and back to Mexico (5,300 miles) all in one year. It took three tries, so he had more experience than most people of having to make the decision that the hike was really and truly over, even if he hadn’t gone as far as he set out to.

Scott knows that some things just can’t be conquered despite the best combination of preparation and perseverance — early snowstorms in the Sierra, for example. But he also knows the importance of ignoring others’ well-meant advice, skeptical comments, and even heartfelt pleas to show some common sense and get off the trail.

This advice from Scott meant a great deal to my family. He passed it on in Oregon in 2004, when we crossed paths on the PCT. Later on in Washington, bad weather turned back our family twice, preventing us from getting over a pass and hiking the last 30 miles to Canada. At the time I felt that any objective observer would declare the trip over, and was ready to do that as well. But my daughter, Mary, and husband, Gary, insisted there must be a way to finish. We put off a decision while exploring our options, and they were right. We reached Canada despite the cold and deep snow.

Three weeks later, Scott followed his own advice and reached Mexico, completing his first PCT yoyo. In 2009 he and Adam Bradley set a PCT speed record (65 days, 9 hours, and 58 minutes). 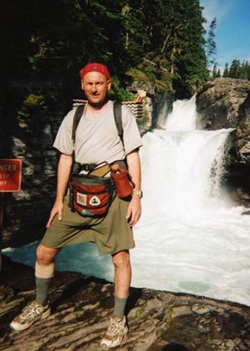 David Rainey (aka Pineneedle) at St. Mary Falls in Glacier National Park during his 2006 CDT hike. (Photo courtesy of Rainey)

7. Being dirty and smelly is OK. But wash your hands every chance you get. Many cases of giardiasis, or “beaver fever,” are in fact caused by poor personal hygiene.

8. Be in charge of your own hike, but not anybody else’s. David Rainey wrote, “Make all your decisions. Limit your involvement in others’ decisions.” This doesn’t mean ignoring good advice, or refusing to offer good advice to others when asked. But you have to weigh everything you know and then make the decision that’s right for you. And don’t fall into the trap of taking responsibility for someone else’s unwillingness to do the same.

9. Long trail hiker Alice Bodnar likes to check the guidebook frequently during the day and prepare mentally for what’s ahead:  “If I knew that a very long elevation climb was ahead, I was able to accept it and tackle the climb as a personal challenge,” she said of the John Muir Trail. “However, if a long climb caught me off-guard I would get anxious about the length of the climb. For me, knowing what’s ahead is a great comfort, so a quick consultation of a guide is key to my enjoyment of a long hike.”

10. Don’t complain, just tell it like it is, says Yogi: “I like to make 'statements of fact.’  When the weather is slapping me around, it helps to say out loud, 'Damn, it’s hot!’ or 'My toes are frozen!’ or 'Rain three days in a row sucks!’  This is not complaining — I’m making statements of fact. Don’t laugh, it really does work. Saying it out loud releases all the frustration, and now I’m just living with what I’ve got.”

Next up: in Part 4, the final piece in this series, trail angels offer advice based on the hundreds of thru-hikers they’ve met.

“Planning a Thru-Hike: Part 1”: tips on choosing a trail, gear, training, and resources.

“Planning a Thru-Hike Part 2”: What am I doing out here? And what am I going to eat and drink?

If I had a dollar for every time I have seen this piece of advice ignored, I would be richer than Warren Buffett and Bill Gates combined -

Stop and take care of your feet at the first sign of a “hot spot” before it becomes a blister. And when you have blisters, take the time to treat them — antiseptically.

Doc Ellis, the course director for our High Adventure leader training course, and for which I teach several sections, has been out in the hills for many decades, and has observed that there are more "Grand Adventures" cut short by blisters than accidents or any other cause. Taking care of your feet, those things that will propel you on short hikes or thru-hikes, is part of the old "prevention is the best treatment" mantra. The first step is properly fitted footwear (whether boots or trail runners), combined with proper socks. The second step is recognizing and taking action for hot spots. The third is prompt and proper antiseptic treatment of blisters that do develop. Beyond that, your trip is over.