This is from the July 25th New York Times:

Bear-Proof Can Is Pop-Top Picnic for a Crafty Thief 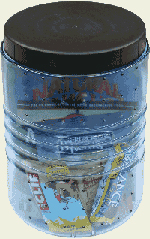 It was built to be impenetrable, from its “super rugged transparent polycarbonate housing” to its intricate double-tabbed lid that would keep campers’ food in and bears’ paws out.

The BearVault 500 withstood the ravages of the test bears at the Folsom City Zoo in California. It has stymied mighty grizzlies weighing up to 1,000 pounds in the backcountry of Yellowstone National Park.

But in one corner of the Adirondacks, campers started to notice that the BearVault, a popular canister designed to keep food and other necessities safe, was being compromised. First through circumstantial evidence, then from witness reports, it became clear that in most cases, the conqueror was a relatively tiny, extremely shy middle-aged black bear named Yellow-Yellow.

I have not seen this first hand but I have heard it from a few sources namely various news articles and new york forest rangers. But the phenomenon is not just related to a small corner of the Adirondacks it is becoming a larger and larger each season. So if you are planning a trip to the ADK don,t get a bear vault there are many other brand out there to chose from.

Is there some reason they do not make a bear canister with a combination lock or a keyed lock, weight maybe?

Surely the people who design these things are smarter that the average bear, but maybe these bears are not average!?

Also, I have a friend who is working on an idea to rig his bear bag rope with an air horn, kinda like a booby trap. For several years we have been putting bells on ours. I'm worried an air horn might scare a bear bad enough to cause him to turn and run right over my tent!

You could also rig up a bear bag rope with a can of bear spray which would provide the bear with some adverse conditioning I would think, but my luck would be that I would forget about it, and I would be the one getting conditioned!

ha ha Trouthunter, in the High Peak section of the ADK bear canisters are required and recommended throughout the entire ADK.

Yes mike068, they are required in many places aren't they.

In the Southern Appalachians bear bagging still works, but many of us are switching to canisters.

Cartoon from years ago (have to see if I can find it) - Two bears are standing next to a trail, watching two hikers approaching. Both hikers have full packs, with bells and pepper spray cans. Bear 1 says to Bear 2, " Isn't it great that the meals these days not only ring the dinner bell as they approach, but come with their own seasoning?"

...Surely the people who design these things are smarter that the average bear, but maybe these bears are not average!?

It isn't that the designers aren't so smart, it's the users who don't use their heads and don't pay attention to the cautions.

But then, the graduates of Yosemite Bear University have been opening training schools all over the continent, and will soon open branches in Kamchatka to expand their presence in Asia.

Trout I have herd that some black bears are inquisitive like raccoons and the bells just make them more curious. I.E. most of the forest rangers in the ADK will recommend that you don't use bear bells because it makes them curious. Bear bags are still widely used in the ADK in some areas.

Bill I have not seen that cartoon.

Yes, duly noted Bill, that was a stab at humor more than a stab at the fine folks who design our gear.

mike068, yes I would agree that blackies are very curious, I think that while hiking you are better off talking or singing to warn bears of your presence. I sometimes put a bell on my bag rope to warn me of intruders whether it be bears or raccoons, or whatever. I can always yell 'HEY' or whatever, if I hear the bell at night.

Just workin' on the problem here, certainly don't have al the answers. My biggest problem in most places is Raccoons and other critters.

Trouthunter if your looking if you looking for something to keep bears and other critters out of your camping area I my self just get a nice fire going and let it burn and smolder all night. if you do it right it goes out around daybreak and the smoke keeps the animals away well except the chipmunks they just act like an old lady a bitch at you most of the time maybe they figure if they nag you enough you will leave lol. Anyway you could try this, my dad had a small detz kerosene lantern (you know like an old time railroad lantern) he use to light it when he went to bed and put it out in the morning but he use to burn diesel fuel in it. When I was in the boy scouts we never had any bears come through our area they always went around it. On more than one occasion we had bears come near our area but never through and never bothered any of our stuff.

The bear canister I have works good and the bears cant get into it but is too heavy 3 1/2 lbs i was thinking of getting a Ursack and go back to the bear bag hanging trick especially when I am solo which is most of the time.

I've been considering getting the 'Bear Vault Solo' at a little over two pounds it's not bad I guess. But I really don't find bear bagging that difficult, some people seem to have a hard time with it. Getting it set up I mean. Of course not all areas have the dense forests we have here in the southeast and no one wants to have to search for a good spot.

Bear bagging still works in my area if done right, but I wonder how much of that is because the area is so rich in natural food for the bears? In other words maybe they are not desperate?

Bear bagging is acceptable but it is a pain sometimes, it so much easier to use a canister and drop it on the ground. I have a larger canister, one that will fit all of my smellable including all of my cooking gear. Using a Ursack is the same as bear bagging it just a bag that will not allow the other woodland critters squirrels, chipmunks, raccoons, possums etc to chew or tear through the bag.

The lid on a Garcia canister opens up with what looks like flat head screws that have a coin sized slot in the head. I think there is also a button on it.

The Garcia site has no explanation of how it works, which is really stupid. Here is a picture I found on another site-

Here's a list of canisters allowed in Yosemite. http://www.nps.gov/yose/planyourvisit/containers.htm

This site lists approved canisters for other parks in the Sierra-http://www.sierrawildbear.gov/foodstorage/approvedcontainers.htm

Tom the Garcia has 2 zeus clips they are just quarter or half turn screws. I is similar to the one I have Counter Assault Bear Keg but it has 3 screws. The screw heads can be turned by a coin, screw driver, knife blade, spoon etc. Some people don't like this type because you need to use a tool to open it but if you look at it a little differently quite a few items you have in your pack or pocket can be used so its not really a big deal if you have some common sense.

Mike, thanks. I actually knew that, but wanted to point out to anyone who wanted to see one that Garcia's own website fails to explain how it works. I actually bought one a while back and then traded it back in to REI before using it for the Bear Vault when they first came out.

I like the Bear Vault, but not sure how bear proof it really is. So far I've just used mine in winter, so no first hand experience.

What I have seen is the bear movie at the check-in at Camp Curry (Yosemite) and the old Toyota that used to be in the parking lot with the door ripped off by a bear.

They aren't as dumb as they look, as slow as you would think and really, really strong.

Did I tell you about last weekend?

Was hiking off of Little River Trail in the Smokies, reading Smoke Screen by Sandra Brown (very VERY good btw), and jamming to my itunes (both ear buds). Was between the Goshen Prong Trail Junction and Huskey Gap Trail and almost ran right into a yearling cub.

I just wish i was thinking to take a pic, he didn't even look up at me, was 10 - 20 feet in front of me walkin towards the river, i turned around to get away from him (and also look for mamma and bro or sis), 30 or so feet, turned around with camera in one hand, and M-90 firecracker in the other. Damn bastard had already made it to the river and couldn't get a pic of him :( :(

I told this story to a buddy in Gatlinburg, they said this cub is a very curious one, everyone knows about him, and approached a hiker at site 24 while he was cookin dinner -- actually snuck up on him and laid on the ground like a dog... anyway, this cub isn't afraid of people or sounds...

Sooner or later these bears get tagged & transported or sadly sometimes euthanized.

It's best for the bear if you can scare them away, I hear more and more people using the firecracker method. I haven't tried it myself, but I don't see why it would not work

Does this cub have a name yet?

Sad but true, but the worst part of it all is most of the time is because people think its cute to feed the bears & cubs or just being slobs in general. Then they seek out humans looking for what ever, then if someone gets hurt they say its the bears fault.