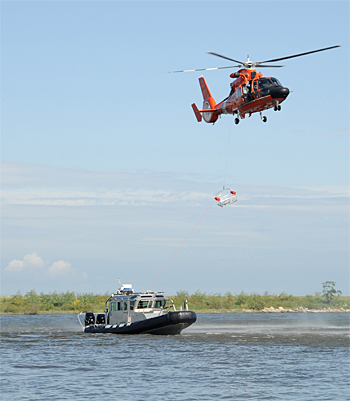 The question of whether or not to carry, let alone use, an emergency personal locator beacon can stir up some rousing discussions on Trailspace. Whether you're for or against having the devices in the backcountry, get ready to raise your eyebrows at this story.

53-year-old Kurtis Thorsted was sentenced to 30 months in federal prison for broadcasting 51 hoax distress signals over six months in 2008. His actions cost the Coast Guard more than $102,000 for attempted searches, and in one instance delayed their response to a real emergency.

Thorsted plead guilty last July and was sentenced last week. In pleading guilty, he admitted to broadcasting “Mayday Mayday” and stating that he was in a kayak off the coast of Santa Cruz, Calif., and having difficulty getting back to shore when in fact he was not in a kayak or on the water, and was in no danger. He was actually at his Salinas home.

“This case represents superb cooperation between Coast Guard investigators and the U.S. Attorney’s office,” said Capt. Thomas Cullen, deputy commander of Coast Guard Sector San Francisco in a 2009 press release. “Unfortunately, this type of criminal behavior occurs far too often. Since we presume that every call for help is both valid and time-critical, we immediately launch our boats and aircraft to search the probable area of the distress call. My biggest fear is that someone will die because we have rescue crews searching for a false distress when they are needed for a real emergency elsewhere.”

It's worth noting that Thorsted's public defender said in a memo that Thorsted is disabled from a traumatic brain injury. In 2004 he was sentenced to two years in prison for the same crime and fined.

via Wend and the Associated Press

Did you know you can cancel a false alarm?: www.sarsat.noaa.gov/false.html

Well our "justice system" will certainly keep him from doing it again while he is incarcerated. It really makes me wonder about our justice system if in fact the guy had mental problems.

(I will not write what I am really thinking.)

I dont understand why people do things like that.

..(I will not write what I am really thinking.)

Common Noodle, don’t leave us hanging like that, we love it when you opine!
That was a good insight this dude may not be running on a full tank. Mental illness or not, he needs to be made an example of, since his behavior could have placed people’s lives on the line. In any case the general public needs this example to demonstrate there are consequences for this kind of nonsense.
Ed

License to carry, with a test just might save us tax payers a lot of $$$. Over $100,000 plus court, plus prison cost, etc. PLUS loss of jail space for some violent nut. Not to mention will real emergencies be taken seriously... Perhaps they should have taken the nut out and dropped him in the ocean

Could and did... every time you scramble a helicopter or fast boat, there is risk for those highly-trained individuals. Those vehicles are not guaranteed to return, from real missions or false calls.

This is truly sad. I hope they took strides to remove his ability to send them in the future. Don't know how you would accomplish that... scramble all signals from his house? :)

Well, without knowing how extensive his mental problems are it's hard to form an opinion other than that his behavior needs to be stopped, even if that requires confinement in jail or a mental facility. If he truly has a serious mental problem I hope he gets the appropriate care needed to help him.

I have seen people in the past who are compulsive, in large part because they never leaned how to control their behavior, it is not always a chemical imbalance of the brain. Although there are no shortage of doctors who are more than willing to simply medicate the symptoms. This guy seems to be functioning at a level that allows him to operate a PLB for sure, so I hope he mends his ways or gets treated for his problems, whatever the case may be.

Sometimes in matters like these I think you have to focus on the safety of those affected by the offender, this is not a perfect world, but putting people (SAR) in harms way needlessly is not acceptable.

Knowing his actual location at the time of a distress signal might be accomplished by court ordering him to wear a ankle bracelet, at least you would know if he was near the monitor. Provided of course he didn't leave the bracelet behind or take the monitor with him. Haha

There is a way around everything it seems.

Disabled or not he got what he deserved wrong is wrong and if he indeed has a mental issue due to his injuries hopefully he will get the care and supervision he requires. People could have died, have died or have had serious repercussions due to the ignorance of others in this manor. Not to mention searchers and rescuers have been injured them selfs physically and or mentality in situations of this nature.

I think some of you here that are in or have been in some form of SAR weather it be fire dept, wilderness, military, etc will agree that people take that job extremely serious and take it personally when you loose someone or someones you didn't have to because if ignorance.

I have no tolerance for this kind of activity, being an X-Police Officer and a EMT.

I'm not saying that this guy did not get what he deserved. But anyone that would do that must not be right in the head. Maybe it is alcohol or drugs.......... Do not know.

So they say he has a house, or lives in one. Is he otherwise productive? Does he have a job? Does he pay his bills? I do not know that either.

So they incarcerate this guy for 30 months and he comes out with nothing and probably lost everything he owned if he owned anything. Even if he has been "rehabilitated" in the prison system where does he go unless he has a healthy family to support him? His job prospects are pretty much shot.

Yes, you can say he did it to himself. But where does that put us as a collective society? What to do with the guy now that he is back on the street with nothing and no place to go?

I work with three guys who made some really stupid mistakes and ended up "in the system". The government does not help them (Read you the tax payer.)

I do not have an answer but I see our current justice system as one that does not work very well.

I'm in the Coast Guard, stationed in California north of the Bay Area, and I command a small boat station. We respond to distress calls in up to 20 foot surf, 30 foot seas and high winds in an area littered with rocks and reefs. I would hate to have explain to a young Coasties parents why their son or daughter died responding to a false distress call. I'd also hate to have to explain to somebody why their son, daughter, father, mother, etc. died because we were responding to a false distress call and could not make it to a real distress call in time.

This isn't any different than somebody setting fires and then standing by watching while the fire department responds. Being productive, owning a house and paying bills doesn't mitigate what he did. He should have thought through all of this before he picked up the radio and started transmitting.

I'm in the Coast Guard, stationed in California north of the Bay Area, and I command a small boat station. We respond to distress calls in up to 20 foot surf, 30 foot seas and high winds in an area littered with rocks and reefs. I would hate to have explain to a young Coasties parents why their son or daughter died responding to a false distress call. I'd also hate to have to explain to somebody why their son, daughter, father, mother, etc. died because we were responding to a false distress call and could not make it to a real distress call in time.

This isn't any different than somebody setting fires and then standing by watching while the fire department responds. Being productive, owning a house and paying bills doesn't mitigate what he did. He should have thought through all of this before he picked up the radio and started transmitting.

I well understand your point dm 1333. And you and your kind are the hero's and truly serve the rest of us, putting your life on the line. I thank you all for that.

What the guy did was 100% totally wrong. If he never is sorry for what he did then to ell with him but if he is at some point, I would like to know that there is some way for him to make restitution. If he is not capable because of mental issues then I would hope he gets the help he needs.

We responded to a 406 MHz EPIRB hit yesterday, 20 miles offshore. A CG helicopter got on scene about 8 minutes before one of my boatcrews, conditions were 16-18 foot seas and 35 knot winds. Three people were hoisted off of an overturned 32 foot catamaran and transported to a hospital because they were very hypothermic. The rescue swimmer swam to our boat and was given a ride back to our station. The helicopter, a Dolphin, didn't have the room or fuel to also bring back their rescue swimmer. A delay in getting on scene might have resulted in those people being to hypothermic to cling to their overturned boat and they would have been lost.

Glad to hear it worked out for everyone involved. Good job!