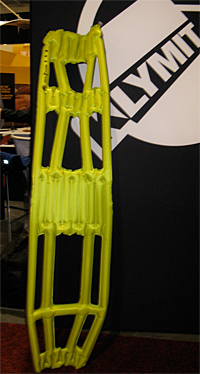 What looks like the bare bones skeleton of a sleeping pad, is really the minimal, ultralight (9.1 ounces) Inertia X Frame pad from Klymit. Klymit's designers used body mapping to determine what areas of a pad they thought were a waste of space, then cut them out entirely, leaving support only where your body needs it.

According to Klymit, the design reduces the compaction of sleeping bag insulation, eliminating heat loss and capturing convective body heat within the dead air space.

Klymit's major distinction so far has been its use of NobleTek insulation technology, which uses argon, a noble gas, for adjustable levels of insulation in jackets and vests. The Inertia X Frame pad takes twice the pressure of a standard ground pad and can be inflated with air or, for additional insulation in colder weather, argon.

Because we're at Outdoor Retailer, where gear superlatives abound, it's worth noting that Klymit says the Inertia X Frame is "the lightest and most packable camping pad in the industry." The pad packs 70 percent smaller than competitors' pads when deflated, down to the size of a soda can.

Amy May gave us the skinny on the pad at Outdoor Retailer, in the video below.

9 oz is incredible. But given that the spaces will negate any sort of R-value, this would be a very warm pad only despite no compression of bag down in those areas. It is more gimmick than something with real practical application.

Hey CWF, how can you possibly know it is a gimmick? have you tried it? Do you know what the R-value is? What do you mean by "this would be a very warm pad only despite no compression of bag down in those areas"? Can you back up your bold claims?

I have tried it, most comfortable light weight 3 season pad I have ever lied on. You should probably test one out before you can give any valuable insight, otherwise you just come off as a bigot.

[Editor's note: This poster is the founder of Klymit.]﻿

At one total post I think Huayna must be very attached to this funny looking pad.

Would not be for me as lightweight bags depend on a bit of insulation under them to be comfortable even in warmer temps. Maybe it would work well in the tropics?

Huayna, the design looks pretty creative and I sure like the weight: 9.1 ozs that's crazy. Reducing to the size of a soda can sounds great. My thermarest takes up a lot of room and is only 3/4 length, but it is close to 20 yrs old. I like to sleep on my side also, does this work? How long have you used yours and does it seem to take abuse well?

It was surprisingly comfy on my side for the 10 mins I got to try it at the show. It looks like they ship them mid November so I placed a preorder on their site. They jumped on it as hard as they could when fully inflated during the demo/show and dragged it there, and it is made out of materials that seem tough like my heavy self inflating pad so I assume it is tough, much tougher than my NeoAir anyways. I will try to remember to share my experience this winter when I try it out.

[Editor's note: This poster is an employee of Klymit.]

Thanks, I will keep on eye on your posts.

I am aware of r-values in reference to window insulations. But I have not seen them used for gear and clothing. Does the diameter of the tube make a difference? For instance, the Klymit pad looks to have greater diameter tubing than the Klymit vests. Does that mean that the Klymit vests are lesser insulated than the Klymit pads? Or is the r-value a constant regardless of the diameter of the tube? Also, does the density or "air pressure" of the tube have anything to do with the level of insulation? Would very small tubing, pumped up very tight, have greater insulative value than one that is moderately pumped. This adjustable insulation concept is interesting.

@Trey R-Value on the vest is a function of volume, not pressure. A vest was made of a special fabric that could retain pockets of vacuum with the same volume as Klymit's would be just as warm (or warmer). That is, small tubing pumped up very tight would not insulate any better. It'd insulate worse, but the seams would split before you reached a pressure where it mattered.

R value for a sleeping pad like this is usually an average over the different zones. I haven't been able to find an R Value quoted anywhere for the IX- maybe Picchu can share- so I don't know if they present an average over the entire pad, the R-Value of the inflated bit, when inflated with air, when inflated with a noble gas, etc. More complicated than a Prolite or NeoAir, and certainly a harder pitch to make.

As always, I'm skeptical- but I don't think there's any reason to denounce this as a gimmick off the cuff. Any pad that would allow you to use the insulation of your sleeping bag to stay lofty would be pretty warm- all of the compressed down between your body and your Thermarest isn't doing much to keep you warm. The biggest limitation of the IX from what I can tell is that it's only 1.5" thick, which translates to the warmth of a 40-50 degree bag. No false advertising- they say outright that this is a 3-season pad, and that'll likely be true no matter how warm of a sleeping bag you use with it.

That said, I can't imagine buying one of these until, at the very least, technical specs are published. Personally, I'll wait for reviews- but someone has to be on the bleeding edge. :)

Is Picchu just an employee of Klymit, or is he the founder? Either way, his comments rub me the wrong way, written in a way that implies he was just another guy at OR and was impressed by the pad. I think the pad looks promising, especially given its weight- but I think most of us would respect you more if you didn't try to fake us out with a sock-puppet.

Out of curiosity, I looked up the heat conductivity of argon and the major components of air (nitrogen and oxygen). One reason for my curiosity is that my tire dealer fills the tires he sells with nitrogen, and when we reduilt out house, we installed double pane windows with the space between panes filled with argon. Argon's conductivity under the same conditions is about 1/5 that of nitrogen (abt 80% of air) and about the same as oxygen (abt 20% of air). (R-value is mathematically the inverse of conductivity - the "R" means resistivity).

So Picchu has chosen an inert gas that is used in the insulated window industry to inflate the pad "when needing more insulation", and does have lower conductivity than the plain old air that the standard air mattress uses. However, I should note that the windows in a house are still a much larger heat transfer site in a house than the walls per unit area, especially walls that are filled with fiberglass or foam insulation. This also means that a foam, down, or Primaloft filled sleeping pad of the same thickness will have a lower conductivity (or higher R-value, since that is usually the way insulation is rated) than an argon-filled pad of the same configuration.

Now, part of what Picchu (Klymit) claims is that the spaces allow your sleeping bag to have much of its loft in the spaces, hence more insulating capability. I suspect that the compression of the bag on the tubes where your weight is pressed negates the gain of having the expanded insulation in the gaps.

The biggest loss in the standard configuration air mattress is actually convection within the tubes (foam, down, and Primaloft fills block the convection). Argon's specific heat is about half that of air.

Without having tested it in the conditions I spend a lot of time in, I see no reason to expect that this pad offers any significant gain beyond the weight. One thing I do not see in the report or on their website is how much the canister of argon weighs. If it weighs as much as a pound, you are back to the weight of a regular thermarest. As a summer pad, ok, but not in snow or on a glacier. As to the comfort, I would have to try it.