Congratulations to Minnesota paddler Arnie Carlson, winner of a $400 LED Lenser lighting prize. For reviewing his outdoor gear in July, Arnie won both a 1,000-lumen H14R.2 headlamp and a 600-lumen M7RX flashlight, all thanks to LED Lenser. 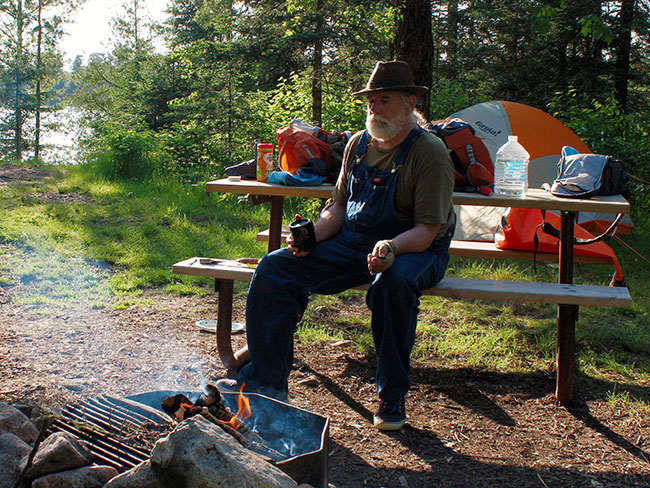 "Wow! What an honor to win a contest!" said Arnie after learning he won the LED Lenser lights. "I am excited, and surprised, to be the winner!"

We asked Arnie to introduce himself to the Trailspace community:

I live in Northern Minnesota about 60 miles from Canada. The Boundary Waters Canoe Area is just north of me. I grew up in Western Minnesota on a farm, and I spent most of my free time riding dirt bikes and snowmobiles. I was in the Navy for nine years and lived in Philadelphia, Guam, South Carolina, and Los Angeles.

I love the outdoors, and I have hiked and camped everywhere I've ever lived. I camped in the Pocono Mountains in Pennsylvania and the Angeles National Forest in California. While in Guam I snorkeled a lot on the reefs and explored the tunnels left over from WWII.

After the Navy I moved back to Minnesota, 45 miles north of the Twin Cities. My family and I went car camping and fishing nearly every weekend for years. In the winter we fish through the ice. I also hike and snowshoe in the winter, as long as it is not too windy; it makes a big difference when the temp is well below zero.

I bought my canoe about 25 years ago and I have made many trips into the BWCA over the years. A year ago I moved "Up North" and I am backpacking and canoe camping a lot again now. I have always been interested in photography, and I recently bought a much better camera and three lenses. I've never been a hunter, but I love to shoot all the animals I can with my camera.

Thanks to the folks at LED Lenser, Arnie won two impressive outdoor lights:

We hope you enjoy your powerful, new LED Lenser lights on your paddling and backpacking trips.

Congrats Arnie ! That is so cool! Isn't it cool to win something? That's how I felt when I won reviewer of the month, I was jumping for joy! This is such an awesome website with an amazing community of people from all over, I really love it!

Thanks Liz. Totally out of the blue for me. I wanted to review the canoe paddle because Bending Branches paddles are great, and they are a fantastic company. Made in Wisconsin U.S.A. The last thing on my mind was the contest, although I was vaguely aware of it. The headlamp will be great for gathering firewood in the dark I think. I thought about getting one for awhile now. The flashlight is something that one can always use. When the items arrive, I will be sure to add reviews here on Trailspace.

Thanks again for sharing that Bending Branches review. Their paddles are quite beautiful, so it's nice to hear how well they've worked for your paddling and also that the company is a good one.

Enjoy your new lights! I hope they work out well for you.

Thanks, Arnie! I'm glad you enjoy it.

Hey Arnie, I'm a fellow Minnesotan! Congratulations. I have a bending branches hockey stick and I love it. Great company. Maybe I'll see you around Gitchiegoomie sometime.

Thanks Jessie. Good to hear from a fellow Minnesotan! How close are you to Temperance St. Park? I've been planning to hike there some time soon. I've camped North of Tofte a few times this summer as well.