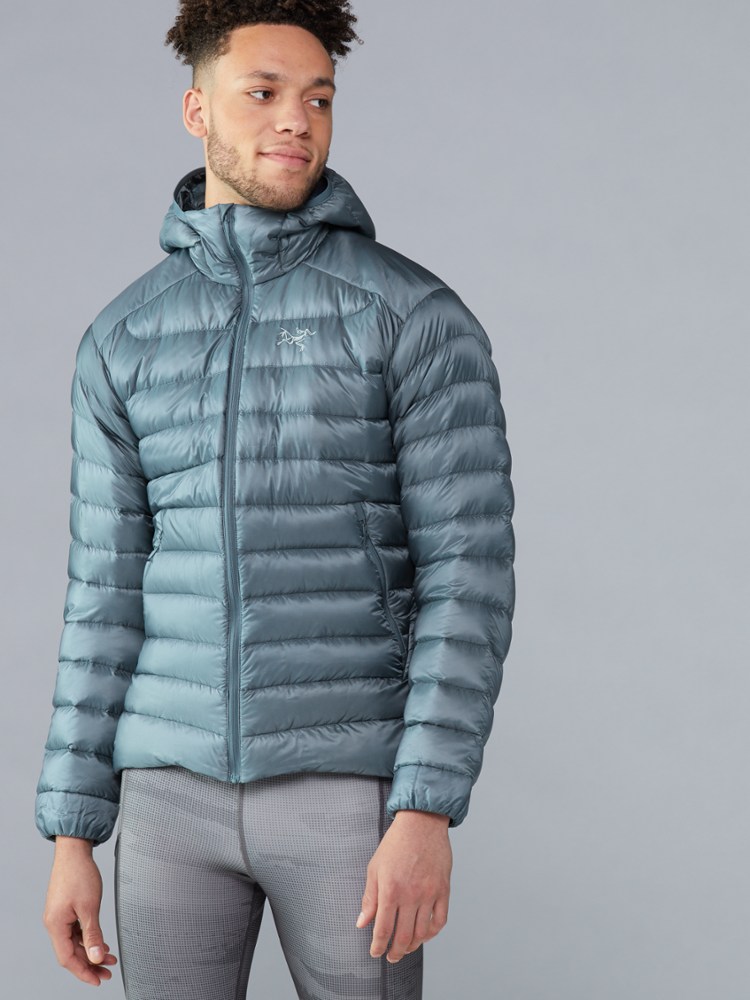 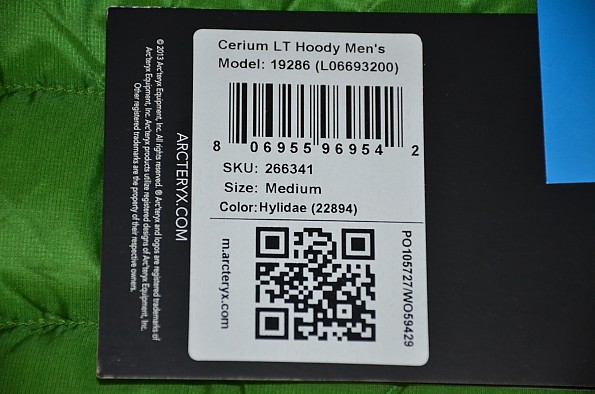 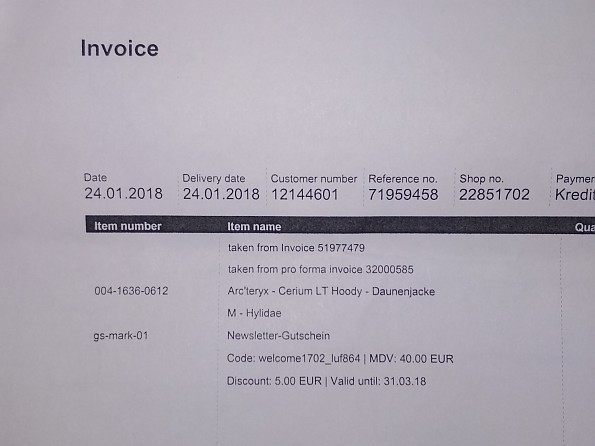 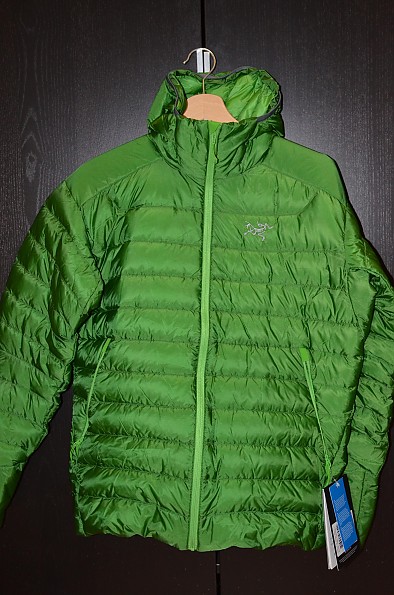 This is a review of the older version which lacked drawstrings at the hem, still being sold by various e-tailers.

I had recently purchased the older version (2016?) of the Cerium LT Hoody, which lacks a drawstring at the hem, because I got a good discount. I got it in the color Hylidae, a nice shade of green.

My initial impressions were that it was an aesthetically pleasing garment, which felt soft and light in the hand.

The next feature conspicuous for its absence was the drawstring at the hem. Even though the cut of the jacket ensured that the hem fits close to the hips, it is by no means a tight seal. As a result, when walking outdoors in the winter, the lack of a tight seal at the hip enabled cold air to be sucked in—the movement of the body effectively worked like a bellow due to the lack of a seal at the hip.

In essence, the free movement of cold air annuls the warmth generated by the insulation—defeats the purpose of wearing it!

Another feature I disliked was the fact that the main zipper was not the molded plastic kind. While the lighter zip used in the Cerium LT may save weight (few grams?), it is not nearly as smooth and easy to use as the molded zippers like YKK.

Having said that, there were a few features worthy of appreciation. The jacket is incredibly light and comfortable to wear, with a well fitting hood. The hood has a drawstring at the back, which ensures that it can be cinched tight to form a snug fit.

Overall, the two big design flaws (I see that the newer version has addressed the absence of a drawstring at the hem) makes the asking price of the jacket unjustifiable. I ended up returning the jacket after a month of use.

However, the Cerium LT Hoody was the first piece of imperfectly designed Arc'teryx gear that I have ever used, LACKING the usual Arc'teryx edge in terms of innovative materials and superior construction. It was simply NOT a cut above its competitors, especially at its asking price!

Finally, I would like to elaborate a little about the moderation of reviews by Arc'teryx:

I had initially submitted an honest 3-star review of the product (99% identical to the above review) only to hear nothing about it for a couple of weeks.

By the way, my 5-star review for the Gamma AR pants was accepted within days of its submission (it is entitled "Tough as nails pants!" and submitted under my nickname "Sampy" from Czech Republic).

After 10 days, I still heard nothing from them.

Consequently, I wrote to the customer service regarding it, only to to hear that "You have to take it up with the Canadian counterparts, as they handle the reviews."

Henceforth, I wrote to the Canadian branch—no response whatsoever!

Just to be sure, I reread the guidelines to check for any possible violations of it. None were obvious. Still, I decided to remove the reference to YKK zippers and the other Arc'teryx products I had mentioned, and resubmitted it using a different email ID.

Finally, I did get a response—resubmit the review!

By now, I was both confused and annoyed.

The only thing that could have prevented it from being accepted was possibly the use of discriminatory language—totally subjective and open to interpretation.

Hence, I removed the last few lines of the review (where I state that it is not a cut above the rest and that it is the first imperfectly designed Arc'teryx product I have used) and resubmitted it—yet again!

The worst part was, in each "resubmit" reply, they never mention the exact sentence or phrase that is in violation of the guidelines.

Finally, after a few more attempts and edits, my review was finally accepted, several weeks after the initial submission!

I did reduce the number of stars from three to one for the final submission which was accepted to factor in the horrendous customer service, which should be part of the total cost of their products. (FYI, I did receive a full refund for the jacket from the e-tailer I had purchased it from.)

I checked up on the review to see the kind of response it garnered. After about four days, my review on Arc'teryx's product webpage had suddenly vanished! Arc'teryx deleted it and never gave an explanation for the same.

In essence, Arc'teryx seems to be a) oversensitive when it comes to its interpretation of "Discriminatory language" and b) extremely arrogant when it comes to dealing with reviews they don't like (my five-star review for the Gamma AR Pants is still up there in their webpage).

In conclusion, my trust in Arc'teryx customer service has been severely eroded and has left me with anger and distrust. How can the overall ratings of Arc'teryx's products be trusted if they selectively delete lower ratings without giving any explanations?!

Welcome to Trailspace, Sampy, and thanks for sharing your review with us. Your experience sounds frustrating. I hope you'll consider reviewing some of your other gear as well.

Hi Alicia. Thanks! i surely am looking forward to reviewing the other gear i own. With respect to Arc'teryx's customer service, i found this particular experience to be quite bizarre, given that my previous experiences with them to be overwhelmingly positive - i had my older, delaminating Alpha SV jacket replaced with the latest version of the Alpha SV for free and my Elaho Shirt swiftly repaired for an unraveling stitch. However. with respect to submission of critical reviews, they seem to be overly sensitive. i tried to communicate with them regarding the same, only to find that it was like trying to deal with a hormonal teenager!

We'll look forward to your other reviews, Sampy. I've had positive experiences with Arc'teryx gear as well, but have never had to use their customer service.

Meh. Not so much.

I tested this against a 4 ounce heavier Patagonia Down Sweater Hoody and a 2 ounce heavier Rab Xenon. Nope. Not worth the extra money.

Very nice quality and fit, but, no. For a week I did my morning sunrise walk in temps ranging from 22°f to 32°f. I put the jackets outside and wore one then the other on a 1/4 mile walk up the road and 1/4 mile back. I wore a Patagonia lightweight baselayer long sleeve under them one morning, then 200wt Icebreaker another day, and 200 wt plus R1 Hoody anther day. One day I carried a Helium2 shell and put it on at the turnaround spot for the walk back.

The Cerium was not wind resistant. When held up to a light I could see lots of gaps, especially at the baffles. The only area that was not cooled by slight wind was the hood. Most wind encountered was <10 Mph and breezy with temp at 30°f. Compared to both the other jackets it was least wind resistant. Xenon won that test. I think because it has no baffles.

The Xenon was warmer than the Cerium in all tests. The Patagonia Down Sweater Hoody (has the longest name) and was the warmest.

Water test was done in bathroom. Cerium beaded the most. Patagonia was not so great, but functional. And the Xenon, which has been through it all for the last two years, still had good DWR, even though it has been washed 10’s of times. But when I first got the Xenon it shed light rain and snow to perfection. Pertex is great fabric, and durable.

For the money I would get the Xenon again and the Patagonia Down Sweater Hoody, but not the Cerium. I paid $284 for the Cerium and still would not do it again.

Thanks for the review, hootyhoo. I hate paying that kind of money for a nominal product.

How is the insulation holding up in the Xenon? I've been looking at that jacket but somewhat cautious since some complain that Primaloft loses most of its insulation value after a few seasons.

This is a pretty warm and comfortable jacket, but overall I'm not totally happy with it.

I bought this jacket new, from Arc'teryx in smoke grey.

I suppose in a darker colour it would be better as I can easily see the different feathers through the fabric.

The overall fit and comfort is really nice, the sleeves seem to be longer than on most jackets, which was really helps keep the wrists covered and keep the cold out.

I've only had the jacket for two months and haven't used it for much, but the fabric already shows some snags, and the down has shifted and clumped at the elbows and the back.

I've been caught in the rain and it's done a nice job of repelling the water for a few minutes, but I obviously wouldn't use it as a rain layer.

I don't get too hot in it, which is nice, but sometimes it doesn't keep me as warm as I'd expect. I can really feel the wind and cold come through the seams between the cells.

It's rather bulky and fits poorly under things, but that's expected. It does layer over things well, I often wear my Re-tool Sweater under it on really cold days.

Thanks for the review, Kyle! 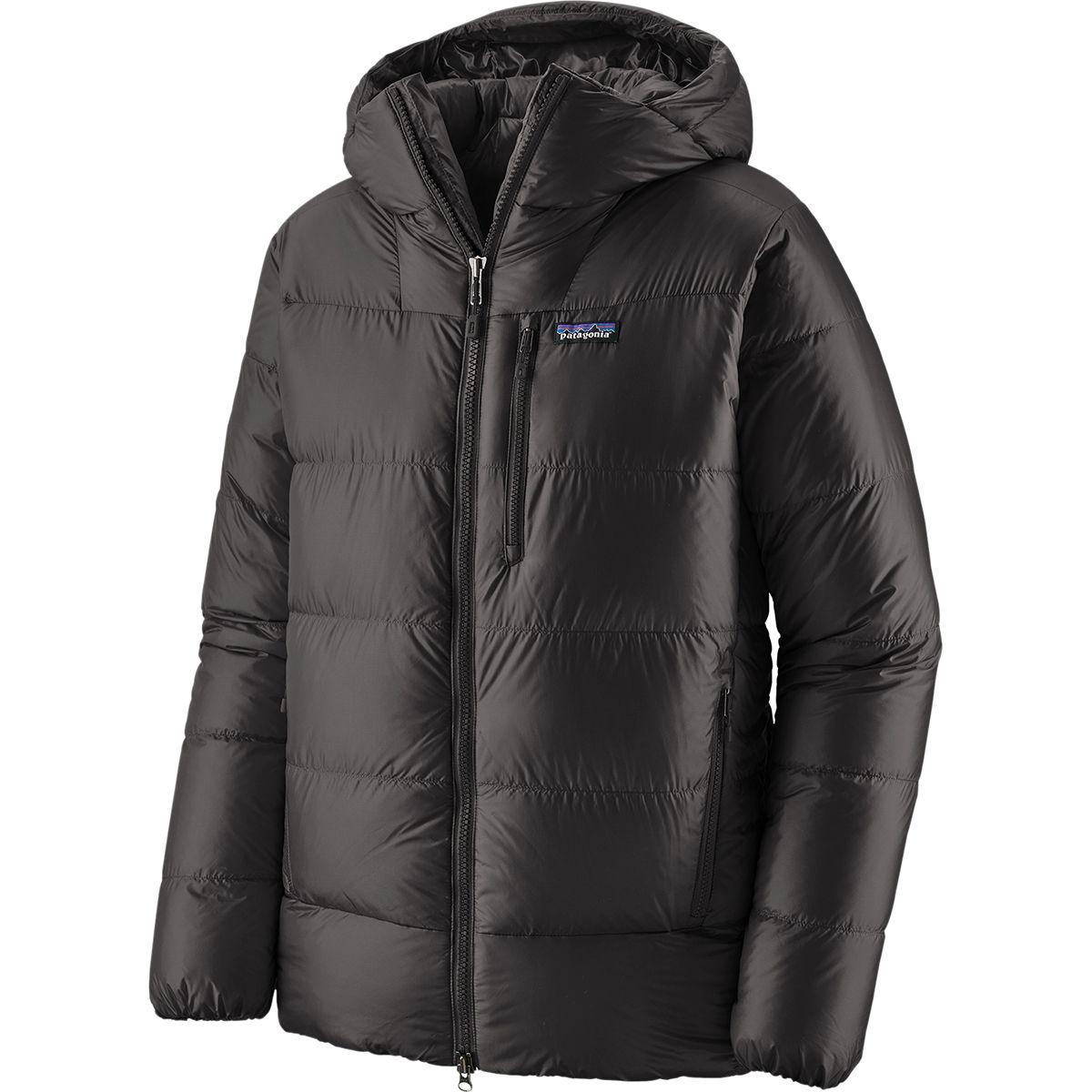 The Best Men's Down Insulated Jackets

Our community of gear reviewers has field-tested and rated the top down insulated jackets available.