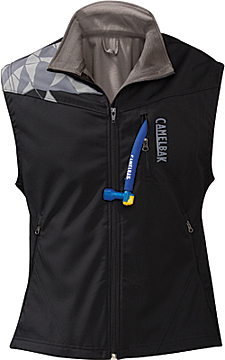 I first tried the new CamelBak ShredBak hydration system in January at the winter Outdoor Retailer show’s on-snow session, where I also tested numerous tele skis and the new Easton snowshoes. I wore the ShredBak in its full configuration of inner mesh vest attached to the outer softshell vest for about five hours of skiing downhill on the teles, going around the cross-country track on skate skis, and snowshoeing over a wide range of slopes both on and off trail.

CamelBak originally was to supply me with a ShredBak prototype in spring. Instead, they sent a women’s model, which clearly was not going to fit me, to Trailspace’s editor, Alicia MacLeay (read her ShredBak review).

In July, while I was at the summer OR show, a men’s medium ShredBak arrived for me. As soon as I returned from the show I tried it on, with some trepidation, since I normally take a large (due mainly to getting my shoulders built up during years of climbing and some gymnastics). However, the inner mesh vest that carries the hydration bladder has sufficient stretch that, while snug, is still comfortable, even when wearing the chest transmitter strap of one of my heart rate monitors.

I have now used the ShredBak, along with the new Leki Thermolite AERGON Antishock trekking poles (read my review), on a half dozen summer hikes, totaling perhaps 40 to 50 miles, and on several bike rides.

Since we are in the midst of a summer that is featuring a lot of 80-90 degree days, I opted to wear the mesh vest only and not the soft shell outer vest. I will say that the outer vest is of high quality and should work very well during ski season, for which it is really intended. The inner-outer vest combination worked very well for me in January at the winter OR Show demo day.

The inner vest attaches to the outer soft shell vest with several loops and buttons. Since it is closed with a zipper, there is no apparent risk of the attachment system failing during wearing. In fact you could wear them separately, if you got too hot and needed to shed a layer. 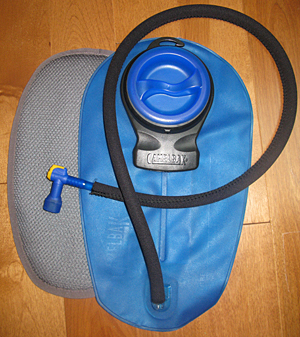 The 72-ounce bladder is a bit different from the usual CamelBak (or other company) hydration reservoirs. It is a different shape, shorter and wider, and has an internal divider to keep the bladder’s shape when partially empty. This also keeps the weight more uniformly distributed across your back. In case you put very cold fluids in the bladder (and against your back), there is a removable foam pad for insulation.

If I were to use it on my trips in subzero weather, I would be inclined to leave the foam pad out so that my body warmth could help prevent freezing of the contents, although when I have worn my CamelBak Classic in such conditions under my jacket and backpack, enough body heat got through the foam of the CamelBak’s pack to keep the contents from freezing.

I wore the mesh vest and bladder on a number of hikes plus two bike rides, one of which was up the Bay Area’s infamous Old La Honda Road, a 3.5-mile climb ascending 2,500 feet, with a slope greater than 10 percent in places. This was a fairly hot day, though I was under redwoods the full distance up the hill.

As it happened, I chose the wrong day to go up OLH — there was an organized ride following much of the same route, with dozens of young hotshots passing the Old GreyBeard on the way up (Eric Heiden holds the record up the hill from a ride during his Olympic competition era at about 18 minutes — took me 36 minutes that day, twice as long as an Olympic champion in his prime).

During the ride, I wore the inner mesh ShredBak vest over my regular CoolMax jersey. At the summer OR Show, CamelBak was showing the new VeloBak, a cycling jersey with the same bladder in a pouch on the back; this piece will be much better suited to cycling.

During the hikes, I wore the inner mesh vest over a wicking T-shirt and in one case over a wicking long-sleeve shirt. On a cross-country hike from Clair Tappaan Lodge at Donner Pass in the Sierra Nevada, I carried a fairly full pack with gear for the Sierra Club’s GPS workshop I was teaching. This included several extra loaner receivers, a rain jacket for those summer thunderstorms that too often come up in the mountains, lunch, the first aid kit that Sierra Club hike leaders are required to have along, and a bunch of required paperwork. This placed the vest and full bladder between my back and the pack.

For many years, in cold climates (Denali, Antarctica, backcountry ski tours) I have carried a CamelBak Classic hydration pack under my jacket with the hose running down my sleeve. I previously had asked CamelBak to consider something like the ShredBak for those of us who ski and climb in cold weather, since it would keep the hydration pack from freezing. Many of us who climb in such conditions have found this works well to keep hydrated despite subfreezing conditions that leave even water bottles inside jackets with ice crystals. So it was a delight to find this set-up really works and is much more comfortable than using the Classic.

On the hot hiking days, I did find my back getting wet from the heat and consequent sweating, just as with a regular hydration pack. I had worried about even the mesh vest adding to the heat burden, but found the added heat retention to be minimal. This is probably because the mesh allows sufficient transpiration. 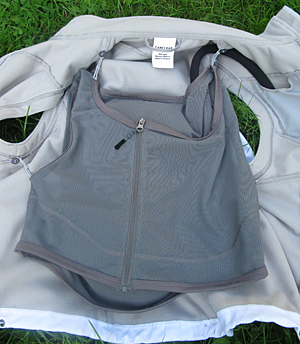 The inner mesh hydration vest attaches to the outer softshell vest with four loops and buttons. The hose passes through a left chest pocket.

The bottom line is that I found the ShredBak to be a good step forward for the winter traveler and for the summer hiker as well, with the mesh vest worn alone. It answers the need for a way to keep a hydration bladder from freezing in subzero conditions and is a more comfortable way to carry the bladder in summer.

There are some minor improvements needed, at least for my personal preferences. One is that the attachment of the inner mesh vest to the outer softshell vest seems a little iffy. The attachment is four loops of thin elastic cord tacked to the main seams of the mesh vest, which mate with four small buttons on the softshell.

My experience with small buttons like this is that they are somewhat awkward to button, especially with gloves on, plus the thread that attaches such buttons all too soon breaks. This would require a field repair, although you could put the inner and outer vests on separately (they do not have to be attached to one another). A more durable fastening mode would be desirable.

Another quibble is that, while the hose can be routed over either shoulder through the mesh vest, the outer softshell has only one pass-through, a storage pocket on the left side. In the medium I was sent for evaluation, this pocket just happens to lie at the level I usually have my main pack’s sternum strap. This is a little low for the bite valve for me, as well, plus I generally keep the hose on my regular hydration packs on the right. The mesh vest is designed so that the hose has to run over the shoulder, which causes a potential conflict with the straps of my full expedition pack (I am able to shift things around enough to avoid a problem, though). I would have preferred to run the hose under my arm and down the sleeve for severe cold weather usage.

These are minor quibbles that I can live with. The ShredBak is definitely a step in the right direction. It probably would have been better if they had sent me a large, though, since the medium softshell is a bit tight under the armpits and both vests are a bit tight around the chest and shoulders. Otherwise, it works pretty well, and is a good step forward in winter hydration.