Top snowshoe companies are bringing a women-and-children-first mentality to the marketplace this year (though gear-lusting guys will still have a raft of cool shoes to drool over).  Our guide to the most notable snowshoes of 2009/10 starts with all-new models, moves on to tweaks in existing product lines, then closes with a nod to industry  mainstays.

Atlas Sprout/Mini
Atlas Snow-Shoe Company's newest shoe is designed to get  4- to 8-year-olds hooked on dashing through the snow. Sprouts (boys) and Minis (girls) are built on a frame that resembles adult shoes but is actually molded in a single piece of plastic.

The snowshoes have a toe crampon for basic traction, and molded snowflakes on the bottom leave an entertaining pattern on loose powder. Bindings are designed with little ones in mind — easy to open and close with gloves or mittens on. Best suited to mild, rolling terrain.

Easton Mountain Products, a longtime manufacturer of tent poles and aluminum tubes for major snowshoe manufacturers, made a big splash late in 2008 when its Artica Backcountry snowshoe notched Outside magazine Gear of the Year honors. Its shoes have been in stores throughout 2009, but the Artica lines' innovations merit mention with the rest of the '09/10 lineup.

Artica's three varieties (Backcountry, Hike, and Trail) share a common frame philosophy: two pieces of aluminum connected by plastic fore and aft. The flexible plastic allows much more give on uneven terrain than a one-piece aluminum frame, easing the strain on feet and ankles. Crampons and bindings are feature-rich, and the Hike and Trail frames are asymmetrically shaped to match the gaits of men and women. 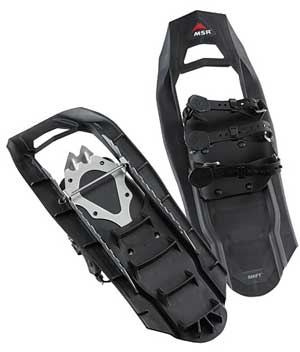 Cascade Designs built the MSR Shift for kids ages 7 to 12 — a group underserved in a marketplace full of cutesy shoes for preschoolers.

The Shift's all-plastic base follows in the footsteps an MSR mainstay: the Denali Evo. Steel crampons and traction blades prevent slips, and flexible bindings fit shoes from size youth 6 to men's 8. Shift snowshoes are suited to flat and rolling terrain. 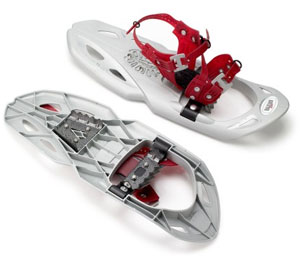 Redfeather joins the push toward plastics with the entry-level Conquest 25, a basic, low-cost recreational snowshoe.

Conquests have standard heel and toe crampons, which should provide ample traction for hard-packed trails. Don't expect a lot of deep-powder flotation, however: shoes in this size range simply aren't built for it. 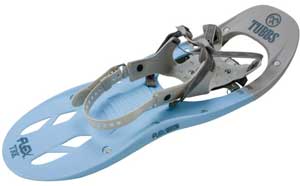 Tubbs is turning heads with its new Flex snowshoes, scoring 2010 Gear of the Year honors from Outside magazine. Tubbs' designs built on tubular aluminum frames dominate the snowshoe marketplace, so the introduction of an all-plastic frame marks a major departure. Flex snowshoes twist at the tail, easing strain on the legs, ankles, and knees over varied terrain.

Flex shoes aren't built for heavy loads on deep powder — their two sizes (22 inches for women, 24 for men) won't have enough float. Instead, Tubbs designers built the Flex for the terrain recreational snowshoers are likely to confront: packed powder and groomed trails. Aggressive crampons ensure traction while the flexible design eases the bumps on these harder surfaces.

TSL Snowshoes goes green with its 325 Nature snowshoe, built with all recycled materials. The Nature is not for greenhorns, however: Advanced features include a heel lift for steep inclines and a binding designed to get you in and out in a snap.

The hourglass shape is designed for a more natural step in the snow, and TSL's sound- and shock-absorbing system is designed to reduce the crunch factor on frozen trails.  TSL rates the max load on the 325 Nature at 260 pounds for packed or semi-packed trails; deep powder would require a much longer shoe.

Atlas adds its Wrapp Comfort binding to the men's 10 Series and women's Elektra 10 Series snowshoes, both of which have been upgraded for 2009/10.

The Wrapp Comfort binding is designed for easy entry — a single tug snugs it tight around the forefoot and behind the heel — and insulating EVA padding prevents painful pressure points.

The 10/Elektra series is a recreational shoe designed for packed trails and moderate rolling terrain. $199.95. 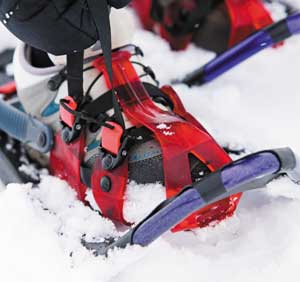 Company founder/president Jake Thamm — who demos his bindings in a video at the company's website —  says the company has refined bindings across its entire line of snowshoes for men, women, and children. This year the bindings are:

Kahtoola is adding a 29-inch backcountry snowshoe (available December 2009) to its FLIGHTdeck TS lineup. The FLIGHTdeck system gives a tubular-aluminum snowshoe a two-piece twist: a crampon strapped to the bottom of a hiking boot doubles as a binding. A hiker can step into the FLIGHTdeck TS shoe if the snow gets deep, and step back out of it if the trail is hard-packed.  Trailspace reviewed the original FLIGHTdeck snowshoe, which required the purchase of a pair of boots. The newer TS system allows the crampon/binding to be strapped to hiking boots or trail running shoes. $269 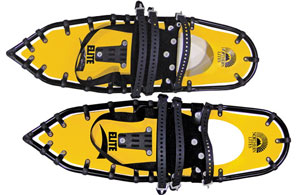 While some complain about snowshoes being heavy, Northern Lites actually does something about it. Where other brands are satisfied with a backcountry shoe that weighs more than 5 pounds a pair, Northern Lites' heaviest duo is just over 3.

Users confirm Northern Lites' contention that its shoes get the job done in deep snow and ragged terrain despite the absence of marketing-friendly doo-dads piled upon just about all the other shoes out there (good luck finding any negative reviews online).

Prices run to the high range of the snowshoe market, though the priciest model (Tundra, $269) still gets you out into the powder for a fraction of what you'd spend on skis or snowboards. 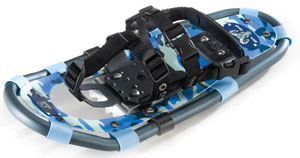 You'll be hard-pressed to pay more than $100 for a pair of Yukon Charlie's, which means you'll carry a bit more weight and get by with less high-tech wizardry. With children's models selling for around $60, parents won't have a huge investment in something the kid will either outgrow or lose interest in.

Yukon Charlies' shoes are built with standard aluminum tubes and plastic decks riveted on. Bindings don't have the wow factor of higher-end models, but they do keep boots in place as intended.

Reviews online paint Yukon Charlies as solid shoes for the money — nothing fancy, but fine for beginners or those who might go out a few times a year.

Share your gear experience with these and other snowshoes by writing a Trailspace review.