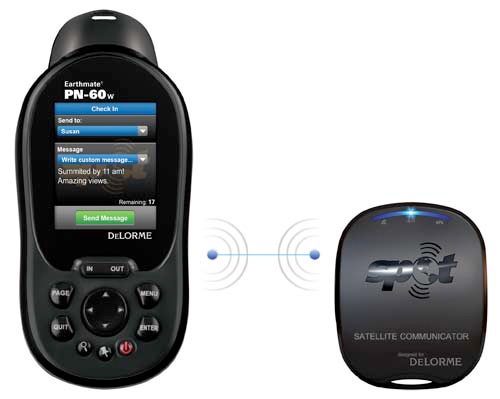 As the 2010 Outdoor Retailer Winter Show approaches, we have been getting all sorts of announcements of wonderful new products. Well, some are pretty interesting and some not so interesting. One of the more interesting (and potentially controversial here on Trailspace) is a collaboration between Delorme and SPOT.

This week DeLorme announced it has partnered with SPOT to release a new Earthmate PN-Series GPS device that will use the SPOT satellite system to communicate text messages from remote locations where cell phones don’t have coverage. According to DeLorme, the PN-60w will connect wirelessly to the SPOT Communicator and be able to send free form text messages to friends and family as well as to websites like Twitter and Facebook. They are also working on developing some new geocaching features, including the ability to log finds directly from the field.

Delorme has long been known in the field of mapping and has (my opinion) the best street and road mapping software and second best topographic mapping software. They have fairly long experience in the area of GPS receivers and linking their mapping programs on laptops to GPS receivers, both their own and GPSR specialty manufacturers.

They introduced their first handheld GPSR a couple years ago, the PN-20, with several improved models since them. The unique thing about the Delorme handhelds is that they are one of the few manufacturers that allows display of USGS topographic maps (rather than vectorized approximations to the topos), plus being the first to display aerial and satellite imagery. Delorme’s part of the collaboration with SPOT is their new PN-60w, a wireless version of their new PN-60, just introduced at this week’s Consumer Electronics Show in Las Vegas.

SPOT, a subsidiary of  GlobalStar, the satellite phone company, is known for their SPOT GPS Messenger, a device that obtains its position from the Global Positioning System and relays that position along with one of several pre-programmed messages to a designated list of “team” members or, in an emergency, to a commercial search and rescue coordination organization, via the digital portion of the GlobalStar communication satellite system. Recently, SPOT introduced the SPOT 2, a much improved and smaller version of the original SPOT, though it was the subject of a recall, due to some hardware problems, shortly after introduction. 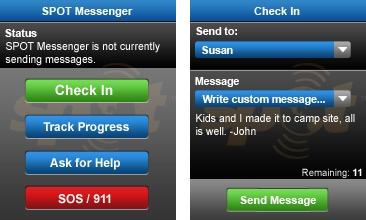 Users will be able to send free-form texts to their SPOT contacts' e-mail or cell phone addresses.

SPOT’s part in the collaboration is the SPOT Communicator. This device, about the size of the SPOT 2, receives position and free-form text data from the PN-60w via a wireless link and relays it via the SPOT network in the same way as the SPOT GPS Messenger. Note that the Messenger is limited to pre-programmed messages, while the Communicator-PN-60w combination allows free-form text messages. At this writing, it is not clear whether the messages are delivered via email or a text message to cell phones, as with the SPOT GPS Messenger, or whether Twitter or other networking will be included.

I hope to have a long discussion with the Delorme and SPOT people at the OR Show in two weeks. In the meantime, I have had some communication with Chip Noble, lead developer at Delorme. I raised the question of some potential problems, based on the SPOT/Globalstar system and inherent limitations of handheld GPSRs. The basic problems of canopy and canyon will affect both the GPS side (the PN-60w) and the satellite relay side (the Communicator). The use of up-to-date chipsets has much reduced the canopy problem, and the future use of enhanced capabilities of the GPS satellites will help still further, once receiver manufacturers upgrade their units to take advantage of those capabilities. 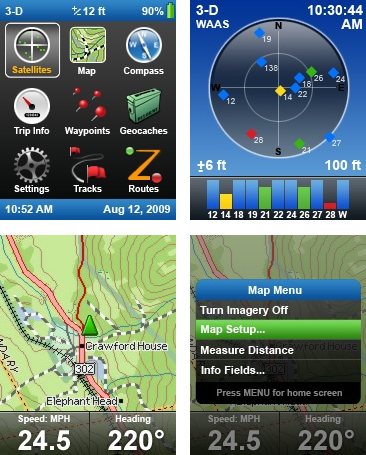 The Earthmate PN-60w will feature a new interface.

Canyon effects (blockage and multipath) are another matter, no matter whether the “canyon” is a natural canyon (deep ravines, for example) or manmade (cities with tall buildings – though I do not think many users will be sending messages like “I am standing in Times Square” on their PN-60w/Communicator combination). Both Delorme and SPOT make clear in their user instructions that an unobstructed view of the sky will enhance both the GPS-derived location and the relay of the SPOT messages. That means both the overhead and horizon to horizon view of the sky.

A problem inherent to SPOT that is due to use of the Globalstar satellite system is the coverage of the planet. SPOT is inherently limited to the region between 80 deg north and south latitude, although for practical purposes, this is really more like 70 deg north and south. This is because of the orbits that the Globalstar satellites are in. Because of limitations on available orbits, Globalstar will not be able to increase the polar coverage as they add more capable and additional satellites. This is not an important consideration for the vast majority of potential users, of course, and not at all for users in the U.S. (except the northernmost part of Alaska) and Canada (except for the northern islands and parts of Nunavut Province). There are some countries that have demanded reduced positioning accuracy, but again, this does not affect the majority of users.

Of more importance is a problem due to the architecture of Globalstar. They use a “bent pipe” system, which means that ground stations are required to relay transmissions. At present, there are areas of the world I will be in during the next couple of years that have reduced or no coverage – East Africa, Patagonia, and Easter Island. Potentially, East Africa and Patagonia will eventually be covered. But, since ground stations must be on land, the oceanic coverage is poor to non-existent. Some islands are not covered (the state of Hawaii, for one group). And open ocean sailors will continue to have to use the current marine radiophone services or Iridium.

When I noted these coverage problems, Chip Noble of Delorme responded:

I plan on talking to Chip and to the SPOT people at the OR Show to get further insights. If possible, I hope to be able to arrange for a test unit to run through my usual set of “system-breaking” tests, to find out in real wilderness situations what the limitations are. Since Easter Island is set for July, maybe I can even test it there to see if I can send something to the Trailspace Blog!

Users of the PN-60w can easily manage their profile online including custom maps and message history utilizing a fully integrated user interface designed by SPOT. Information can be kept fully private or shared with family and friends using custom tools like SPOT Shared Pages and SPOTadventures.com.

The PN-60w with SPOT Satellite Communicator is scheduled to be available in May 2010.

Read the author's review of the original SPOT.

Bill, for some reason, all I can see is the headline and not the article. Any idea what is going on?

I'm not having any trouble loading the page from my end.

Bill: a pal of mine asks if these aren't similar to two-way satellite pagers that have supposedly been around for a decade.

Also, what do you think of the significant cost issue of having to buy a GPSR and a Spot and pay the Spot subscriber fee? You could rent a damn fine satphone for that kinda money, I suspect.

Works for me, Tom D. Please let us know if it's still not working at your end.

Tom M, I haven't seen the combo price mentioned yet. Did you? I was wondering how the math would work out, but figured they hadn't set the price(s) yet.

The combination price is a bit of a reduction from the separate items. The subscription fee, it works out to about $17/month, according to Chip, much less than renting either a Globalstar or an Iridium phone for the same time period. The PN-60 is a much more capable unit than the predecessors (20, 30, and 40), and is in the same price range as other companies' GPSRs with similar capabilities - it is far from a low-end unit. But it will not give you voice capability, only text, and one-way at that. Remember that satphones run $2-5/minute, depending on several things, although the digital transmissions are a lot cheaper.

Tom M, the Communicator is just one-way, as I understand it. One thing I suggested when I did a review of the original SPOT was some kind of confirmation that the signal was received by the satellite, but I have seen no indication that this was implemented. The Communicator, as I understand it, is only a transmitter to the satellites. I will see if I can get an answer to this, but Chip is rather busy at the CES right now.

Still not working. I even turned off my pop up blocker and my firewall. Sometimes my security software goes a bit haywire, so that is probably it.

We'll look into it asap, Tom.

Sometimes I wish ALL texting was one way!

Methinks someone's mother came up with this idea.

Thanks Dave, whatever you did, it works now for me.