Emergency response systems are a frequent topic of inquiry on Trailspace.

How can I call for help in case of emergency? Should I buy a SPOT or a PLB? Do satellite telephones work for calling 911? What about radios or cell phones in the backcountry? Which system works best for summoning help in case of an emergency? How can I give my family peace of mind if I am running late?

These questions often lead to long, sometimes contentious, discussions about the ethics of carrying and using a means of summoning help while in the backcountry.

Are people venturing into more dangerous areas and doing more risky activities when they carry one of these devices? Are there people who carry them just to call for a taxi (or helicopter) home?

From time to time, sensational stories appear in the media about individuals summoning help when they were just tired or running low on water, as well as reports of accidental triggering of devices, which can cause huge and expensive rescue efforts.

There are strong viewpoints on both sides of the argument. Some contend that an emergency response device is just like any other rational preparation for the unexpected problem that might occur. Others contend that simply carrying some sort of emergency beacon implies that you are intending to use it to be bailed out, at someone else's risk and expense, rather than preparing and practicing your skills and carrying gear and supplies appropriate to the area you are entering. Virtually everyone, even those on either extreme, agrees that anyone who carries an emergency locator device has a responsibility to use it only in true emergencies.

The ethical arguments may never be resolved fully, but at least one can make an effort to understand the different emergency response systems available, particularly with an updated system from NASA on the way.

Every emergency response device relies on the relay of information to work. Since 1979, the international COSPAS-SARSAT (Search And Rescue Satellite-Aided Tracking) system has tracked distress radio beacons, beginning with EPIRBs and ELTs, then adding PLBs in 2003. The system works with a group of polar-orbiting Low Earth Orbit (LEO) and Geostationary Earth Orbit (GEO) satellites to receive and locate an emergency signal. 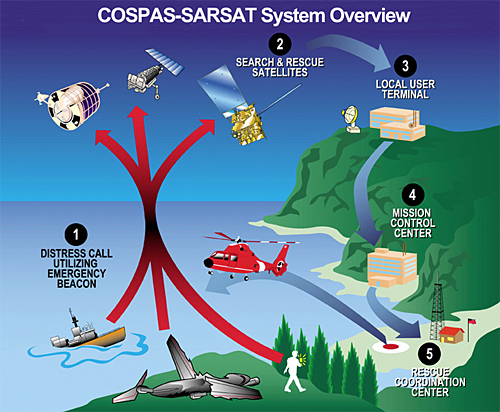 Currently, PLBs (roughly pocket sized), EPIRBs (for boaters), and ELTs (for aircrafts) relay their distress alerts via both the LEO and geosynchronous GEO types of COSPAS-SARSAT satellites (SVs, or space vehicles, or "birds").

Because they move rapidly in their short period orbits, LEO satellites are visible for shorter periods of time and may have a wait time, depending on their current position. However, LEO satellites can calculate a beacon's location using Doppler information and provide global coverage.

GEO satellites detect beacon alerts in their coverage area almost immediately. Most current 406 MHz PLBs and EPIRBs also incorporate a GPS receiver (GPSR) for more accurate and immediate positioning; that location information can be encoded in the beacon message and relayed via GEO satellites.

The Global Positioning System (GPS) is comprised of at least 24 satellites in Medium Earth Orbit (MEO). With a period of 12 sidereal hours (one half an Earth rotation with respect to the stars, a little shorter than a half Earth day of 12 solar hours), GPS satellites are visible to a user's device for long periods of time, and hence easier to lock onto than LEO satellites. However, GPS satellites currently only provide the signal needed for a user's GPSR, cell phone, or other device to compute its location to within 20 feet (with a clear view of the sky).

SPOT relays its messages (OK, Help, and 911/SOS) via the Globalstar digital message service, a network of LEO satellites for satellite phones and satellite data modems. SPOT was the first non-military service to relay limited messages with GPS-derived positioning information. The PLB manufacturers ACR and McMurdo recently have added or plan to add limited messaging capability to their devices as well. 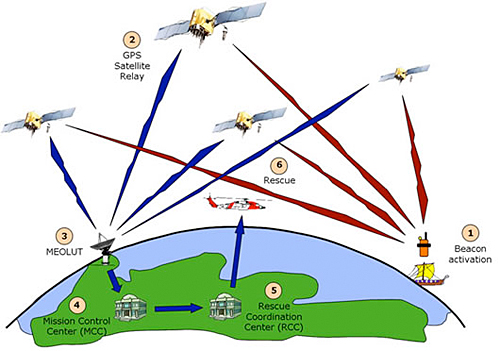 An overview of the forthcoming DASS system, which will use GPS satellites. ((Image courtesy of NASA)

Now, a next-generation emergency response system is on the horizon. For years, NASA, in collaboration with several other government agencies, has been working on the Distress Alerting Satellite System (DASS), a major enhancement that would use Global Positioning System satellites.

DASS using the GPS constellation of MEO satellites to determine an accurate location of beacons for OK and emergency signals, as well as to receive and forward SOS/911 signals, should result in a very fast relay of information compared to the current commercial sat-phone systems and mix of LEO and GEO satellites.

As NASA's Search and Rescue Office states on its website, "DASS is expected to significantly enhance current COSPAS-SARSAT operations by providing near-instantaneous detection and location of 406 MHz emergency beacons."

Development and testing of DASS is being completed by NASA, NOAA (National Oceanic and Atmospheric Administration), the U.S. Air Force, and the U.S. Coast Guard. The system should be operational in coming years after 406 MHz search-and-rescue instruments have been installed on 24 to 27 GPS satellites and once new ground segment tracking stations and processing algorithms have been introduced.  Six "proof-of-concept" DASS payloads have already been installed on GPS satellites.

"DASS will greatly reduce the time to locate a beacon, which will result in more lives saved and fewer national resources expended," states NASA's Search and Rescue Office on its website.

The availability of yet another system of relaying emergency communications does not, of course, resolve the ethical questions of misuse of emergency systems. Some people (the Grand Canyon group who called for a water refill last year, for example) go into the wilderness unprepared, untrained, and inexperienced, expecting that a system or device can make up for any personal preparedness deficiencies. Others trigger alerts either accidentally or intentionally.

Given the possibility for misuse, questions may be asked about whether emergency response systems result in:

(2) more successful rescues of people who should not have been in the situation in the first place, but went beyond their capabilities and equipment in the belief that the emergency beacon would save them if something did go wrong (what some refer to as "fat, dumb, and happy");

(3) more unnecessary retrievals of people who were perfectly capable of hiking out or otherwise not truly in need of rescue; and

(4) fewer unnecessary call-outs for overdue experienced parties who were able to notify their contacts that they were just a bit delayed or taking an alternative route.

Such statistics are hard to come by this early in the existence of emergency locator devices.

Pilots and the aviation industry can point to many successful locations of aircraft crash sites in remote locations using ELTs for many decades. ACR and McMurdo have had many years of successful rescues with the COSPAS-SARSAT system. SPOT points to several hundred successful rescues. ACR, McMurdo, and SPOT all state that genuine emergency call-outs far exceed the number of false alarms and "taxi" calls.

The real solution is, of course, education of the public and particularly of the purchasers and users of these devices. Publicizing the penalties (civil and criminal) that exist and are being extended should reduce the number of false alarms.

As Portland Mountain Rescue, which oversees rescues on Mount Hood, says on its website, "locator beacons are a valuable search tool... However, please remember: locator beacons do not guarantee a life-saving rescue. They are not a substitute for training or survival gear."

How to register or update your 406 MHz  beacon (it's required!): www.sarsat.noaa.gov/beacon.html

How to cancel a false alarm: www.sarsat.noaa.gov/false.html

Technology is a tool, with room for use as well as abuse.

I haven’t felt the need to have AN EPIRB-like device on almost all of my ventures, since I usually travel with others, and the road head is usually only a long jog out. I prefer any outside rescue attempt be informed before launching, to avoid taking unnecessary risk upon themselves. Many of the more remote venues we go on also have manned ranger outpost camps, or trail maintenance worker camps in the general area, both with outside radio contact which we could always avail ourselves to if an emergency occurred. On our really remote treks, such as climbing the less frequented Alaskan or South American mountains it is temping to have an EPIRB like device for when the entire team is in a fix and unable to self rescue, but I question the logic of summoning help when the entire party is in trouble, since such trouble often would jeopardize the rescuers as well. Hence we carry walkie talkies, mainly for team communication - and sometimes for scheduled check-ins with outside parties - and choose instead to self-rescue. Fortunately we have always been able to get out on our own power, the worst situations we’ve endured were broken bones on occasion, and an incident where most members of our party sustained some frost bite due to particularly savage weather, and bad timing. Knock on wood!
Ed

Thanks for the article Bill,

I enjoy learning how things work, I read this twice to put it all in perspective, a lot to learn!

I enjoy learning how things work, I read this twice to put it all in perspective, a lot to learn!

Me too! I like to learn new sorts of things as well, especially subjects that many of us just assume much about or take for granted.

Editing Bill's articles always gives me the chance to learn new things, because if I don't truly understand the technical aspects of the content I can't edit and publish it. So, it forces me to answer lots of questions that come to mind, which is a good learning opportunity.

For this one I got to read info on NASA, NOAA, and the COSPAS-SARSAT sites and get the step-by-step info on how beacons really work (and how they don't work). I now am glad to know the differences between LEO, MEO, and GEO satellites (thought none of my newfound knowledge even comes close to Bill's scope).

Really good info. I've shared is with others. I'm on 2 SAR teams in Maine, an avid hiker and I teach ground nav. so I got a lot out of this excellent article.

Thanks, Grey Eagle. I'm glad you found it helpful.

By the way, where in Maine are you located?