Love the Jetboil PCS personal cooking system, but want to stand out from the crowd? The new Flash PCS version will come in four colors—black, gold, purple, and blue—and has several new features that reportedly increase the PCS’s performance and ease of use, along with adding some bling.

The new Jetboil Flash will feature: 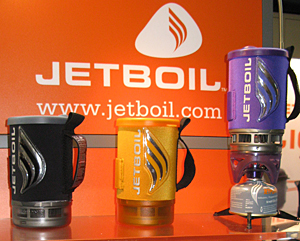 Ashley Gonnella presented the new Flash PCS to us today, and Lisa Eaton of Jetboil gave us a demonstration in thermochromism:

The Flash canister stove cooking system will be available for fall 2009 and will retail for $99.95.