Outdoor Retailer: Texting from the trail with SPOT and DeLorme 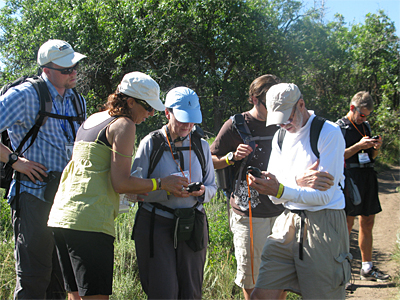 Hikers demo the DeLorme Earthmate PN-60w with SPOT Satellite Communicator on a Round Valley hike in Park City.

A decade ago a friend, an avid backcountry paddler, went on one of his multi-week trips, this time in a remote area of northern Canada. He and his companions, including a few pilots, decided to take along an emergency locator transmitter. This decision generated much discussion amongst the group about when, if ever, they would use such a device and if they even should bring it with them. At the time I barely even knew such beacons existed, let alone that someone I knew could own one.

A decade later, it's now commonplace for many people to bring along some form of communication, from cell phones to emergency beacons, into the backcountry. The debate on responsible usage of beacons and communications devices still isn't settled, and the lines have shifted nearly as rapidly as technology has advanced. Whether you welcome the technology or not, and whether you see it as an evolution or a devolution, more and more people expect instant communication wherever their outdoor travels take them and will bring the means along if they can. 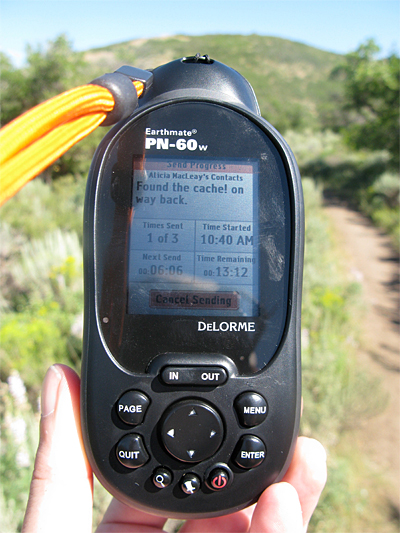 The author sends a free-form "Type and Send" text message.

Today I immersed myself in the issue on a hike with the folks from SPOT and DeLorme. The brands teamed up to produce the DeLorme Earthmate PN-60w with SPOT Satellite Communicator earlier this year. The device is expected in stores at the end of the month.

The combo unit gives users a handheld GPS device (the Eathmate PN-60w, at right) which connects wirelessly to a SPOT communicator device you attach to your pack's shoulder strap.

Along with the usual SPOT functions (status updates, tracking, Help, SOS) and GPS capabilities (including aerial imagery), the major functional difference is the ability to send texts via satellite. No need to rely on spotty cell phone coverage to update friends and family on your whereabouts.

Users can prerecord up to 14 texts or emails of 150 characters each to send, or type and send a new 41-character message from the trail, or summit, or ocean. They can then send that message to any of 10 contact groups of up to 50 contacts each.

"We really wanted to provide the extra functionality of typing in a free-form message anywhere in the world," said Chip Noble of DeLorme. Each non-emergency message is sent three times for a 99 percent chance of transmission, though it's only shared via cell phone and/or email with your contacts one time once received. The SPOT Communicator device also will work alone as an SOS beacon if you lose the Earthmate, leave it behind, or it runs out of batteries.

One four-mile hike isn't enough to review gear, especially a product users may depend on for survival (though Bill S. has been testing a unit), but here are some first impressions of the multi-functional Earthmate PN-60w with SPOT.

I found the unit fairly intuitive to use on my own, only needing minor guidance and orientation for some tasks. While I've never felt the need to update my Twitter or Facebook status from the trail, the ability to send a variety of texts to a variety of contacts and prevent one's contacts from sending out the rescue troops if late but okay was a major advantage to me. I even sent several test texts from the trail (lightning did not strike.) 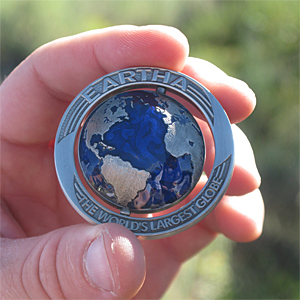 One of the 250 limited edition Eartha Geocoins commissioned by DeLorme.

The Earthmate PN-60w (and its non-SPOT version, the Earthmate PN-60) has specific functions for geocachers to locate and log caches. We easily located a cache on our hike in Round Valley and left behind a limited edition DeLorme Eartha globe Geocoin.

I discovered some limitations in my brief use of the DeLorme-SPOT combo: You can't send a message and track progress at the same time. On the hike,  another user's demo unit (or the user) activated SOS twice, though only to a beta site (and how it happened is up for debate). Also, text messaging, track progress, and emergency SOS features are all activated via paid subscriptions from SPOT.

Despite these issues and a brief introduction to the unit, I can see the appeal of the Earthmate PN-60w with SPOT for many users, including those who are into personal stats, technology, geocaching, or anyone who wants a GPS receiver and/or locator beacon with loads of options.

When it was time to turn in my demo unit a few hours later I felt like I was just starting to uncover its wide range of capabilities and was ready to dig even deeper. 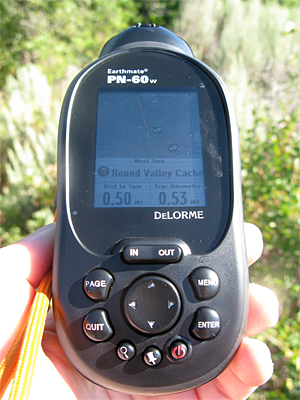