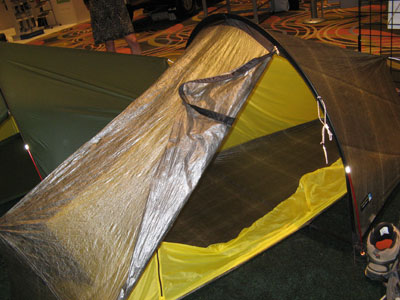 Side view of the Laser Ultra 1.

I couldn't wait to check out U.K.-based Terra Nova's Laser Ultra 1, which weighs a scant 1 pound, 1 ounce (or 1 pound 3 ounces in the full configuration). Less scant is the price tag: $700.

A Terra Nova brochure declares the Laser Ultra 1 is the "lightest double-wall shelter in the world."  The three-season tent's design mirrors the single-arc pole set-up of the classic Hilleberg Akto (and, more recently, the GoLite Eden), with less than half the weight. The interior shell has a bathtub floor and anti-bug mesh, and the exterior fly is made of Terra Nova's high-tenacity ULTRA fabric.

Inside it's a bit too short to sit up in at 34 inches, and it might be a bit too snug for a full-size inflatable pad (not that anybody in the market for a 1-pound tent submits to such luxuries anyway). 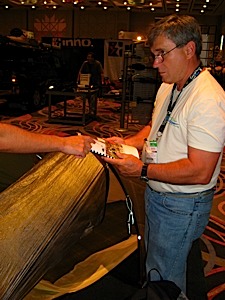 Ultralight backpackers cannot resist the urge to examine a tent with specs like these: I ran into George "Tin Man" Andrews, creator of Anti-Gravity Gear, who seemed quite enchanted with the Laser Ultra 1 after crawling out from inside its narrow confines.

Of course it was impossible to judge how the Laser Ultra 1 would fend off a storm, though Terra Nova has a 30-year track record for building gear suited to the occasionally fierce weather that blasts across the North Sea into England. It's no stretch to hope some of this flyweight's qualities will eventually start showing up in the company's more reasonably priced models.

The Laser Ultra 1 arrives in stores in February and March of 2011.

Bringing Euro brands to the U.S. I learned during my stop at Terra Nova's booth that a company called Sport-Hansa is hoping to help Terra Nova and a few other European brands widen their reach into the United States. Terra Nova has dozens of tents, packs, and sleeping bags to its credit, and a large European following to match.

Matt Huff, a former K2 executive, launched the company to distribute Terra Nova and a few other well-regarded European brands in the United States. Best known among them is Montane, maker of ultralight outdoor apparel. Others include Gronell, which has been making boots since 1937, and Termoswed ("Thermo Swede"), a Scandinavian manufacturer of base layers designed to fend off the chill of a Nordic winter.

Stats for the Laser Ultra 1:

Pretty cool but makes me wonder how many people would spend what, $450.00 or so on losing two pounds of body weight? It's all gotta be carried no matter where.

Terra Nova has been on the market for some time, and I know they are popular among the utra-lighters with their tents here in Norway. We have much of the same weather as England, maybe a notch or to even worse. Up till now it has been the Laser Photon and Laser Photon Elite that has been used. I guess the weather here resembles Alaska in many ways.

Let me get this straight: It's too short to sit up in, it's too snug for a full size sleeping pad . . . and the most important stat is left out: The interior square footage. I guess I'll keep my 8 lb tent.

Let me get this straight: It's too short to sit up in, it's too snug for a full size sleeping pad . . . and the most important stat is left out: The interior square footage. I guess I'll keep my 8 lb tent.

With a first name of "Tipi", I would be very astonished if you had plans to buy one of these. Nor would I, we both perhaps are getting too soft and comfort demanding. I am at least.

But some sacrifice gladly the roomy normal size tents for a few pounds less to carry. It is almost become a religion to many, and when religion enters reason exits.

No thanks about 400 dollars over my tent budget...

Designed for the extra ultra light and the extreme racers.

The Laser(s) are a series..a 2.6lb spacious two person for example made of the better grade siliconized nylon.. and I believe <$400.

By the way I'm not tall, but the Laser Ultra 1 is plenty long and I can sit up.

and it is so Cool!

If the footprint of this tent is a non tapering rectangle, it has a "spacious" 17.3 sq. ft.

I finally got the stats for square footage on the Ultra Laser.

Retail $350. The interior height is 37.4. The Ultra is not available until March 2011, but the Laser Competition and Photons are available now.

What Otto leaves out is that he has that great hut system he told us about last winter. So, who needs a tiny tent when you have a hut to stay in? I've stayed in huts in New Zealand and even the simple ones beat a tent anytime, especially in bad weather.

What Otto leaves out is that he has that great hut system he told us about last winter. So, who needs a tiny tent when you have a hut to stay in? I've stayed in huts in New Zealand and even the simple ones beat a tent anytime, especially in bad weather.

Have you ever tried to carry a hut?