Petzl had a couple of rather interesting items. One was the Universo, a new belay-descending device designed to help prevent common climbing mistakes. 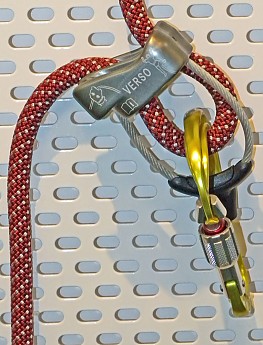 A problem with many tube-type belay/descending devices is that climbers tend to completely detach the device from its carabiner when attaching a rope for belaying or descending. After that, climbers often drop the device, creating a desperate situation if they are unfamiliar with the Munter hitch.

Other mistakes I see often are climbers flipping the carabiner to cross-load it, or passing the rope through the small end of a pear-shaped or HMS carabiner (the rope, especially a double rope for rappelling, should go through the carabiner's large end). Petzl's Universo is designed to help avoid these missteps.

The Universo combines the Verso (a basic tube-type belay/descender without the auxiliary holes of the Reverso 3) with Petzl's Attache 3D, a very light, HMS-style screwlock carabiner.  A sliding plastic connector permanently attaches the carabiner to the Verso.

The carabiner should be on the belay loop on your harness. If you do this with the Universo, then you will not drop the carabiner or belay/descent device when feeding the rope at a changeover at a belay station or when preparing to rappel. And the carabiner will not flip to become cross-loaded, or have the rope at the wrong end. 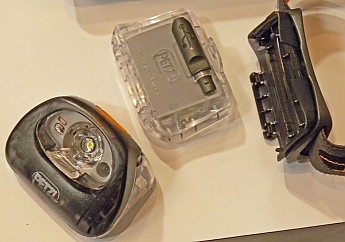 Light and battery for the Petzl Tikka Core 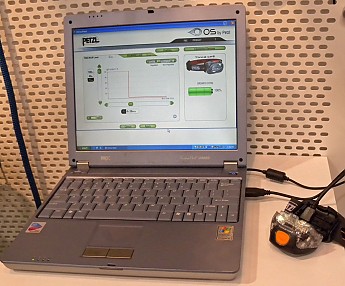 As a climbing instructor, I welcome this type of device as an added safety measure for beginning climbers. Plus, when involved in a desperate situation (rappelling down at night or when caught in an unexpected storm), the device reduces the chances of an inadvertent error.

The second interesting new gadget from Petzl is the Tikka Core lighting control and rechargeable battery system. The Core rechargeable lithium battery will fit any of the current Tikka headlamps (not my ancient first-generation Tikka, however), as can be seen in the images at right.

The battery can be recharged from the USB port of your computer as you are adjusting the battery usage curve. The second image  shows the computer screen in the usage curve mode set for the light to be at full power until the remaining charge reaches a certain point; then the power drops to "survival" mode, providing just enough power to (hopefully) make it back to camp. The curve can be set to gradually decay, much as alkaline cells would, or to run at a lower level for longer usage.

Unfortunately, setting the usage curve does require a laptop, which one is not likely to have on a climb (though it may be at basecamp).  But it does offer the possibility of tailoring the usage curve to your hike or climb. The Core battery will list at $39.95, including the USB charging cable. A package of the Tikka XP and battery will list at $110. 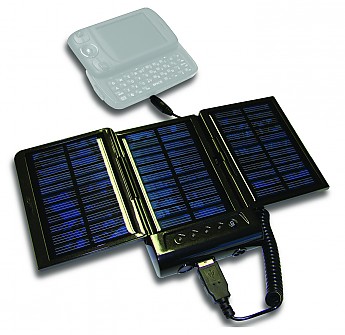 Energizer has several new solar-charging products. Many of us have the old (but very handy) Energizer "cell phone emergency recharger" that holds two AA Lithium batteries. The new Energi To Go system takes this a step further by packaging a solar charger with rechargeable lithium cells. 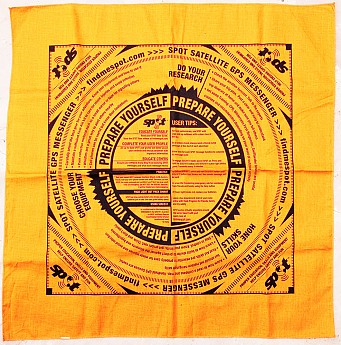 During my visit with SPOT, I received a bandana the company plans to distribute as part of its effort to educate people on responsible usage of SPOT and other emergency communication devices. It does have a lot of useful information (much of which we repeat here on Trailspace over and over).

I am testing the SPOT II, which I will report on later. We also hope to test the DeLorme/SPOT duo that Alicia tried out during the Open Air Demo day. I have received an e-mail from which I understand that the GPSR half (the DeLorme PN60w) is now being shipped to stores and the SPOT Communicator will follow in a month or so. When I asked about the availability for review, I was told that DeLorme and SPOT will be catching up on pre-orders and stores' requests before delivering review samples, so my guess is three or four months.

PacSafe makes covers for packs and other bags, as well as complete bags, that are reinforced with a steel mesh and steel cable inside the straps to reduce the potential for theft. 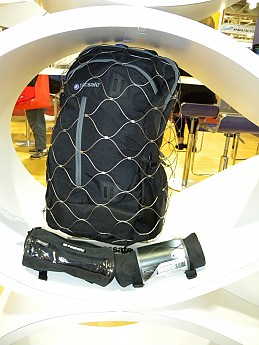 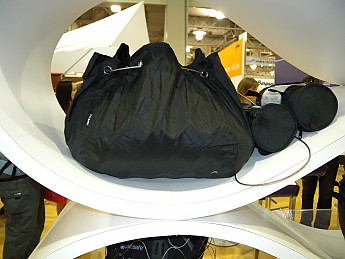 Barb and I have one of the mesh pack covers (big enough for my Terraplane), a "personal-size" travel bag ("personal" in the airlines' terminology of allowing "one carry-on and one personal item"), a lap-top bag, and a shoulder strap for my good DSLR. The idea is that in certain areas of the world, thieves will use a knife to cut the camera strap to grab the camera, grab purses, laptop bags, and other items in airports and train stations, and even slice open a pack or duffel to steal things. The mesh and strap cables discourage this. Plus, the camera straps are fairly anonymous (the bright orange "Nikon D300" on the shoulder strap for my Nikon DSLR screams "STEAL ME.").

A number of customers (including me) have pointed out to Pacsafe that the open-mesh pack covers are a big hint that there might be something valuable in the pack. So Pacsafe, in addition to introducing straps for more bags, cameras, and MP3 players, has introduced a camera bag with the mesh inside the cloth and a cloth bag that covers a fairly large camera bag. The steel cable for the cover or on the camera bag can be wrapped around something permanent and locked when you are dozing during that four-hour wait between planes or trains.

Integral Designs has long been a favorite of a number of Trailspace members (especially the more experienced among us). The large European company Rab purchased Integral earlier this year.

I got a chance to talk to Evan Jones, Integral Designs' president, about the new direction of the ID name. Jones will stay on as a consultant and play a major role in the "tactical" division (the military-contracts side of things, which has commanded a major part of ID's attention for several years). The outdoor part of the company is now settled in Colorado. Most of the most popular products will continue to be produced for now.

However, the old familiar "call Evan and request a bit of customization" won't be there anymore. Jones  promises that the quality and great design will still be there. My personal feeling is that this is probably correct, since Rab does produce high-quality gear of excellent design (Young Son has a pair of Rab ski bibs that are proving to be excellent). Still, I have to feel a twinge of regret at yet another small craft manufacturer being subsumed by a large corporation.

The energize solar charger isn't bad but I would definitely recommend the solar chargers at http://e-solarproducts.com/Solar-Camping-Gear.html I've bought from them before and I was really impressed with their "Portable Solar Power System." It's rugged and can stand up to outdoor conditions unlike other solar chargers I've used in the past. I bought it on a Monday and it arrived on Friday and shipping was free....can't beat that.

Are you associated with e-solar? From your two posts so far, it sure sounds like it. If you are associated with such a company, the rules and practices of Trailspace (as well as common courtesy) require you to openly note such links

I have looked at their products before and was not impressed. The Portable Power System you mention is inadequate for virtually all the gadgets I take into the backcountry or on expeditions. For example, it cannot charge any of my camera batteries (it is 6V at best with the power output unspecified), and the chargers for my cameras require a 12V with a 15W minimum output. I'm not sure it would even power my iPad. an iPod Touch maybe, but I don't take such things into the backcountry.