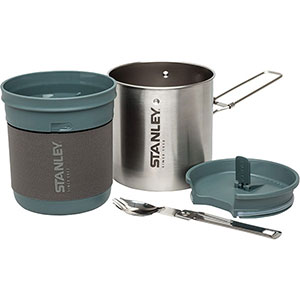 For a person who likes a large cook pot and doesn't…

For a person who likes a large cook pot and doesn't mind a little extra weight, this may be your new favorite.

I admit that I am a cook pot gear geek. (I would rather collect cars and motorcycles, but this will have to do.). When I see something inexpensive that looks like it may be nice to have around, I will pick one up. Stanley's new Mountain series uses imagination to make well nesting, full functioning products.

Total weight on this set including spork is 13.85 oz.  If you are a kid or don't have much to spend on your equipment, this is a good piece of kit

I show it next to the GSI cup for comparison. 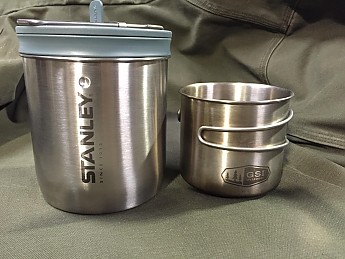 The pot is marked up to 24 ounces, but also gives you much more room above the 24 oz mark. The handle locks into both open and closed positions, but the silicon seal on the lid doesn't need the handle to hold it on and the cup locks securely into the pot. When used for the lid on the pot, the lid sits loose but well in the pot. It keeps the silicon seal safe. I have used this with an alcohol stove with no issues 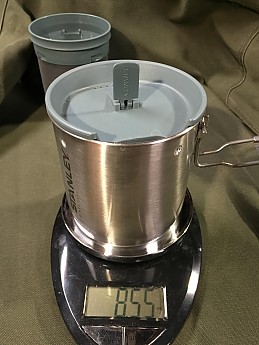 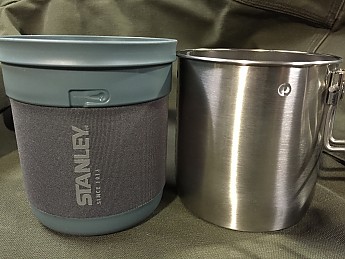 The cup has a neoprene sleeve much like the GSI Infinity mug, that I find very effective. I poured boiling water into the cup and could handle it with no problem. The drinking lid fits tight and works great. I am having a giant morning cup of tea in it now. (Can't waste a cup of hot water.) 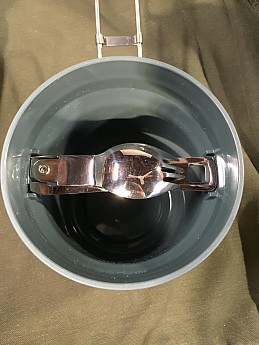 I am torn when it comes to the spork. It has great tines for using as a fork for noodles, but the spoon is shallow enough that you will be better off drinking any soup. You won't be scraping oatmeal out of the cup with this thing. 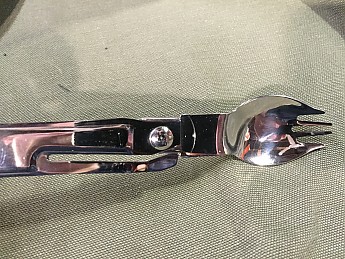 Even though this feels large, I like this set. Previously I seemed to go back to the GSI cup to boil water and a fair share mug so I had room to stir up instant potatoes etc. Then I carried an infinity mug for coffee. This does that in one kit. If I wanted, I could put the GSI cup inside for a pot and leave the large pot, fair share mug and infinity mug at home.

Great review, Ron! Thanks for taking the time to share it and some pictures.

More of: the best cookware » | Stanley »