Backpacking with a Grade-Schooler 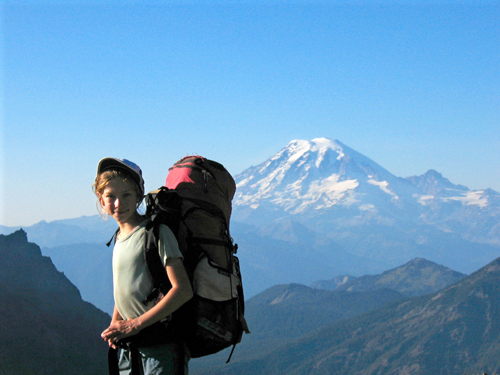 The author’s daughter, Mary, pauses on the Pacific Crest Trail in Washington state in October 2004, with Mount Rainier behind. (All photo credits: Gary Chambers)

Backpacking with a grade-school-age child can be a magical experience. To a 6-year-old, everything is new and wonderful. Having one along helps remind adults why they became backpackers in the first place.

A 10-year-old’s boundless enthusiasm (and utter cuteness) can enliven a backcountry encounter with anything from a friendly dog to a fringe-toed lizard to a forest ranger. But keeping that child safe and happy calls for a little forethought on the part of parents, friends, and Scout and youth leaders.

Experienced backpackers already know the 10 Essentials for Backcountry Travel. Parents who want to bring along a grade-school-age child need to keep three more concepts in mind:

Children in first grade and older don’t need to be carried any more, and they can tote a light pack and help decide what goes into it. But ensuring a successful trip means Mom and Dad should be both well prepared and flexible. 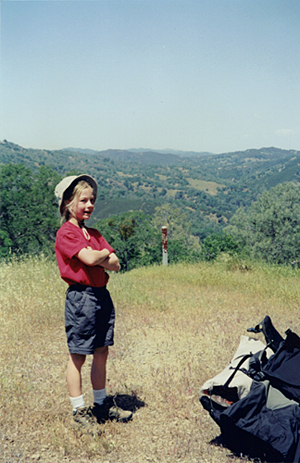 Relaxing in Henry Coe State Park in Northern California in 2002.

I asked my daughter, Mary, now 15, what she thinks of some parents’ insistence that a child make up his own pack before a trip. “Ooooh, bad idea!” she said.  “Or if you must, make sure you look it over really carefully.”

It’s one thing to let a kid put together her own pack for a sleepover at a friend’s house. About the worst that can happen is that she’ll have to borrow a pair of pajamas or brush her teeth with her finger. But a child who packs clothes that are too warm for the weather or shoves a bunch of heavy toys into the pack is a child who won’t be able to keep up, much less enjoy the experience enough to want to repeat it.

When we packed for a trip, we packed as a team, with my husband, Gary, distributing gear based on how much weight each of us could carry. There’s no good reason for a small child to carry his own sleeping bag if that space should hold a parka instead. Of course, each person should carry at least a water bottle, a snack, a whistle, a headlamp, and a jacket. Then, if Dad and Junior, say, need to take a break before catching up with Mom, they can do so.

Children need to play every day. A backpacking trip should allow time along the trail and in camp for the kids to climb trees, dress up their stuffed animals in bandanas, create little towns out of twigs and pinecones — whatever works. Children can learn which activities they most enjoy during day hikes and on campouts. Leave the electronics at home when you’re enjoying nature, and let kids find creative approaches to playtime. Parents need to be willing to play, too.

Mary and I got into the habit of setting up the tent and preparing the bedding while Gary filtered water. Then, he or I could play with Mary (tossing a pinecone, say, or trying to identify animal tracks) while the other parent cooked dinner. For quiet time between dinner and bedtime, younger children can draw in a little notebook with a few colored pencils and older children can read a paperback book. 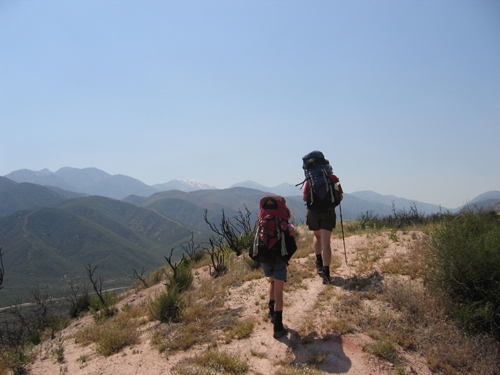 The author and daughter hike through the Southern California desert on the Pacific Crest Trail in 2004.

When Mary was 5 ½ we took her out of school (with her teacher’s and principal’s blessing) for a week in October and hiked Section I of the Pacific Crest Trail in the central Sierra Nevada. We had our problems on this rugged 76-mile section of spectacular scenery — dead headlamp batteries, a delay when we chose the wrong trail and had to backtrack for a mile, colder-than-expected weather with a bit of snow — but my strongest memory is of the fifth day of our eight-day trip. That’s when Mary led the way for 12 miles, with a total elevation gain of 3,500 feet, and still had enough energy to play along the edge of beautiful Smedberg Lake while I set up camp and Gary filtered water (while keeping a watchful eye on our daughter). Very careful preparations made for a good trip. Gary read that section of the PCT guidebook ahead of time and created a complete itinerary from north to south — backwards from the route in the book.

At age 7, Mary became the youngest person to backpack the newly opened 165-mile Tahoe Rim Trail (TRT) in one trip, which didn’t surprise us, since she had just become the youngest person to reach the summit of Mount Shasta (14,179 feet). What did surprise us was that it was Mary who made sure we finished the TRT. Gary had terrible foot trouble early on, and wasn’t sure he could continue. Mary gave him a pep talk one morning. Then he shouldered his heavy pack and started walking. 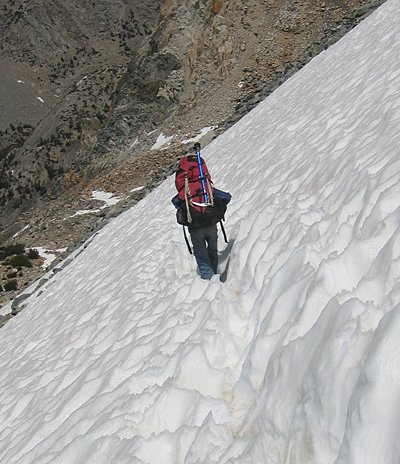 Mary descends the north side of Glen Pass, which tops out at 11,980 feet, on the PCT in the Southern Sierra.

For both outings that year, serious preparation was crucial, from arranging for my sister to bring us our resupply box halfway through the TRT to the day Gary spent teaching Mary how to self-arrest with an ice ax on Shasta.

By this time, Mary had more than 3,000 miles on the trail and more than 100 nights backpacking. From both of us she had learned how to use a map and compass, general first aid, and from Gary “how to use crampons carefully and how to poop in a bag” for mountaineering, the latter due to regulations on Shasta.

All these experiences prepared us for our biggest adventure: hiking the 2,650-mile Pacific Crest Trail when Mary was 10. That six-month jaunt took two years of preparation, if you count all the time we spent planning the route, buying new gear, and getting into peak physical condition during more Bay Area and TRT backpacking trips, in addition to hiking and running.

Thru-hiking as a family meant we had to adjust to a 10-year-old’s pace, needs, and desires, and be much more safety-conscious. For example, we carried extra gear for stream crossings that would be safe for an adult but dangerous for someone so small. But, we also had a third set of very sharp eyes along and a constant source of enthusiasm. It also got us a lot of attention and help along the way. 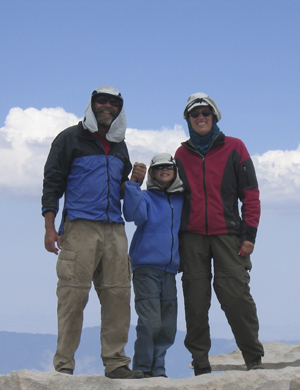 The author’s family atop California’s Mount Whitney, the highest peak in the lower 48 states, during their PCT thru-hike.

By then Mary, who became the youngest person to thru-hike the PCT, was as experienced as most adult PCT thru-hikers, but one thing hadn’t changed: she still needed to play and relax along the trail. (And she still carried a stuffed animal.)

Barbara Egbert has been backpacking, with and without a child, since 1988. In 2004, Barbara, husband Gary, and then 10-year-old daughter Mary hiked the 2,650-mile Pacific Crest Trail. Visit Barbara at www.PCTfamily.com.

This article is the third in a four-part series on backpacking with children of different ages.

The Boy Scouts always backpack with grade schoolers and high schoolers too.

Our Troop has taken new 11 year old Scouts out on their FIRST back pack to Bear Lake near Sonora California as a NIGHT backpack, always very successfully too.

In the winter we have taken new Scouts snow camping... with a previous thorough gear training and gear check, as well as training in how to camp in the snow. (I help teach adults and older Scouts Basic Backpacking and Winter Camping for the Council's H.A.T. Team [High Adventure Training])

I have a friend also a BSA Leader on the H.A.T. Team, who went on a weeks family b-p at 5 years old... that was 55 years ago. His mom made him a backpack, he carried the family's bread supply... all of two loaves.

He still has that b-p and the photos to prove it.

The point is, that even at 5 years old, he was able to contribute to the group's effort.

That's cool. My kid loves to hike, and we go camping. So far, we haven't gotten the chance to take him backpacking. I guess we need to do that.

"Zero Days" is the true story of how two middle-aged Californians and their daughter hiked the 2,650-mile Pacific Crest Trail in 2004. Published by Wilderness Press in Berkeley in 2008, "Zero Days" tells the tale of the trail from the viewpoint of author Barbara Egbert, photographer Gary Chambers and 10-year-old Mary, aka Scrambler, as they learned which family values could survive six months of blisters, dirt, and extraordinary exertion amidst some of the world's most spectacular scenery.

Families interested in doing more backpacking with their kids will find Barbara, Gary, and young Mary inspiring, and yet still familiar.

I was quite impressed with a 10 year old daughter hiking the entire PCT. My youngest son asked for backpacking trip with just me and his (at the time) 17 year old brother for his 10th birthday last Nov. It was both sons first trip. My youngest has been twice now, and my 9 yr old daughter has been once. They both did well, and ultimately liked it. Its the whole walking with a pack that my daughter hated.

Great article! I'm ramping my son's endurance up for a late fall weekend hiking trip above Idyllwild and Barbara offers some excellent tips and perspective!