Backpacking with a Teen 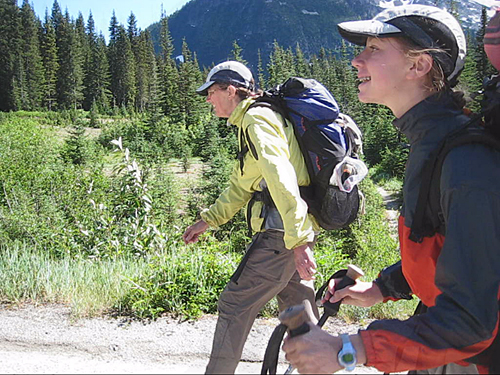 The author and daughter, Mary Chambers, then 14, approach the trailhead at Rainy Pass in Washington state, July 2008, as Barbara takes her last steps to complete the Pacific Crest Trail. Mary completed the trail in 2004 as a thru-hike. (From video by Gary Chambers)

For parents who have taken their child along on backpacking trips from an early age, the teen years are the reward: a youngster who can keep up with Mom and Dad (and is probably faster), share camp chores, help choose routes and campsites, and handle an emergency.

But the teen years are also a good time to introduce someone to backpacking. The basics are the same as for bringing younger children along: make plans that are both thorough and flexible, and match the distance and difficulty to the participants’ abilities. One of the main differences is that many young people do better on the trail with less attention from the adults and more chances to interact with each other.

Bring along a friend

I’ve seen teens walk many miles through really miserable conditions as long as they have each other for company. Beyond the camaraderie, there’s an element of competition — nobody wants to be the first one to complain. The ubiquitous cell-phone cameras can become an advantage, with the kids snapping away while laughing over anticipated reactions from distant friends. Of course, some teens prefer just family members on an outing, while others revel in the opportunity to finally hike alone part of the day. Whether your high-school age child is an experienced backpacker or a novice, give him or her the opportunity to bring along a friend when possible. 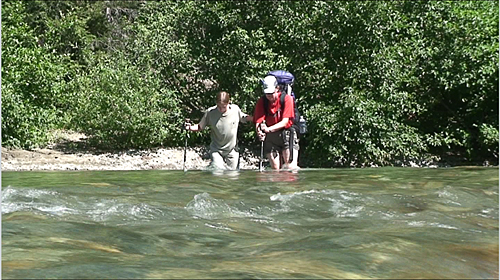 Mary and Barbara cross Washington’s Chiwawa River in the North Cascades, near Glacier Peak. Mary and her dad had already crossed together. Then Mary left her pack on the other bank before carrying a pair of water shoes back to her mom. (From video by Gary Chambers)

In 2008, husband Gary, daughter Mary (then 14), and I spent two weeks in Washington state backpacking 120 miles of the Pacific Crest Trail. Gary and I still had the ultimate responsibility — and the final say — on this trip, but Mary was ready to help plan the route and the food and generally help out.

And speaking of food, the legendary ability of teens to consume mass quantities is based on fact, and that includes girls. I was accustomed to having to cajole Mary into eating at the end of a long day of hiking. But almost overnight her appetite transformed into an adult’s. I no longer had to persuade her to eat our freeze-dried dinners. Instead, I had to make sure I got my share.

Mary’s help on this trip was crucial. When shin splints and blisters slowed me down the last couple days, she was strong enough to take quite a bit of weight from my pack — and experienced enough to know how else she could best help me through the final miles.

Introduce a teen to backpacking

In April of this year, I had the pleasure of introducing a teen to backpacking. Mary and I took her high school friend, Rina, on an easy trip during spring break. Good planning made this a successful trip, and an unexpected storm turned it into a bit of an adventure. We had chosen a seven-mile route to a place Mary and I had visited before, made sure Rina either owned or borrowed from us all the gear she needed, and put a good deal of thought into the menu. On the day we hiked in, we found a comfortable campsite, set up the tent, ate dinner and took a bird-watching excursion around a pond.

Just after it was fully dark, as we were ascending a ridge from which to view the lights of the nearest town, the unexpected struck: despite a weather forecast without a drop of rain in it, a quick-moving storm spread down the Diablo Range. Mist turned to rain, and then snow. And the wind came up.

I’ve seldom been so proud of Mary as I was when she summed up the circumstances, made a decision, and announced, “We’ve got to get back to the tent.” We ran the few hundred yards to our campsite, where Mary made sure Rina got inside first, while she helped me rig a tarp over the tent. Then we dived inside and listened cozily to the wind blowing and the rain and hail striking the tent. The storm blew through in a couple hours and the next morning we struck camp under a blue sky. If the storm had lingered, we were prepared for bad weather, although we certainly wouldn’t have welcomed it.

Mary at 15 is more experienced than most adults at backpacking, but she can empathize with someone her age making an overnight trip into the wilderness for the first time. What made the trip a success? I asked her.

“It was fun,” she told me. “We were well-prepared, and you made sure we had time to socialize. The snow was fun, too.”  Mary told me it’s equally crucial when planning a trip to match individual fitness levels for teens as it is for younger children: “It’s very important to tailor a trip to people’s abilities.” And she appreciated the fact that Mom did much of the work in camp (although the girls did put up the tent and arrange the bedding while I filtered water). Then Mary and Rina went on a photo expedition while I cooked dinner.

Make it a priority 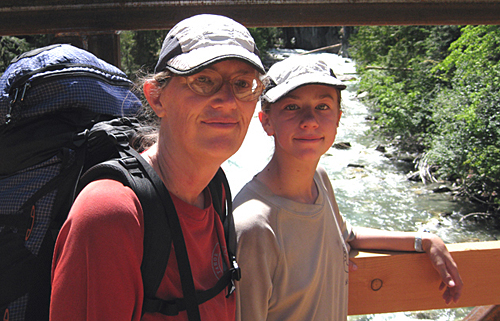 The author and daughter on Agnes Creek Bridge in July 2008, nearing the end of their 120-mile trip. They had good reason to smile: the bridge had just been replaced days earlier. Winter storms had destroyed the earlier bridge, and the creek (more like a raging river) is impassable year-round.

When Mary was in grade school, older coworkers often told me that the early teen years were the time when their children lost interest in hiking or backpacking with their families. My observation has been that kids’ schedules are so full with school, friends, babysitting jobs, and athletics that many family traditions take a back seat, not just the outdoors.

Mary’s advice is to make time for backpacking a priority, even if other activities suffer. I discovered that shopping and housekeeping, for example, had to move to weekday evenings if we were to free up a weekend for backpacking.

And don’t let one bad trip be the last trip. So the kids quarreled with each other or with Mom and Dad on that last outing? They’ll do that anyway — might as well be in a place where healthy exercise and beautiful scenery make up for the occasional lack of complete harmony. The shared efforts can help restore that family harmony for now, while making wonderful memories for later.

Barbara Egbert has been backpacking, with and without children, since 1988. In 2004, Barbara, husband Gary, and then 10-year-old daughter Mary hiked the 2,650-mile Pacific Crest Trail. Visit Barbara at www.PCTfamily.com.

This article is the fourth in a four-part series on backpacking with children of different ages.

There are no comments. You could be the first.