Backpacking with a Toddler or Preschooler

How many miles should you backpack with a toddler or preschooler?

As many miles as the child wants to walk.  And that’s probably a lot farther than most parents would think. 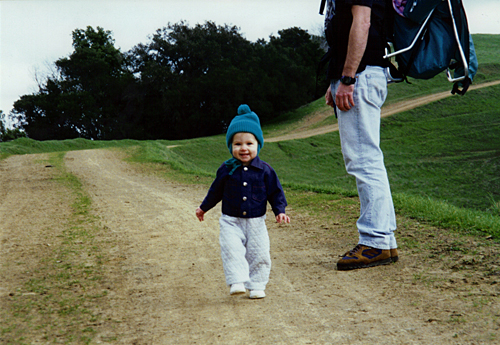 Kids as young as 2 years old are capable of hiking and running short distances on the trail, as long as Dad or Mom is ready with the carrier. (Photo: Barbara Egbert)

There’s a period of time — from roughly age 2 to 5 — when a child is no longer willing to be carried for an entire trip, but isn’t capable of walking the entire distance, either. That’s the time many parents give up even on day hikes with their children.

It’s easy to see why. The constant stops and starts, the frequent potty breaks, the desire to chase every butterfly and catch every lizard, the clamoring for water and snacks and — let’s face it — the whining are enough to make any parent think twice about something as ambitious as a backpacking trip. If the child is being carried, he wants to walk. As soon as he’s walked for half a mile, he wants to be carried. Who needs it?

We as families need to get out in nature as often as possible. My husband, daughter, and I are happiest when we’re walking the long miles, identifying flowers, pointing out birds, finding our route on a map.

Our children need to learn how to entertain themselves without electronics and how to develop skills and confidence in an unstructured, natural way. And they need to get as much exercise as they can while they are still growing and before they discover instant messaging and social network sites.

We as parents need to draw on our infinite wells of patience and remember that getting to our campsite isn’t nearly as important as bringing along our children, so that backpacking becomes a shared activity full of wonderful memories. Remember, it won’t last forever — neither the good parts nor the bad parts.

My husband and I found a way to keep hiking and backpacking all through the preschool years, although it was often a struggle. As a result, by the time our daughter was 5 years old she could hike 10 or 12 miles a day, and was comfortable playing in camp and sleeping in a tent. She could recognize a rattlesnake and knew how to avoid poison oak. And was she ever a strong hiker!

Yes, preschool-age children can go on backpacking trips. But parents need to make a lot of adjustments. Here are some things to keep in mind.

Having a child along on a backpacking trip is a wonderful experience. They see things adults don’t see, appreciate experiences that adults have grown accustomed to, and have fun in ways that their parents have forgotten. The extra trouble is well worth it.

Barbara Egbert has been backpacking, with and without a child, since 1988. In 2004, Barbara, husband Gary, and then 10-year-old daughter Mary hiked the 2,650-mile Pacific Crest Trail. Visit Barbara at www.PCTfamily.com.

This article is the second in a four-part series on backpacking with children of different ages.

Great article Barbara. My daughter just turned four, and I can't wait to take her on her first overnighter!