Now that we've tromped through the snow on a Utah peak and delved into the latest trends, it's time to devote a post to the main reason companies come to Winter Market: to announce what's in the pipeline for next winter. Here's a look at what I've come across. 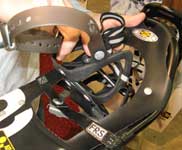 The 8 Series and 9 Series (women's Elektra 8 and 9) trail-walking snowshoe comes with Atlas' new FRS (Free-Rotating Suspension) binding. I took a pair of 9's out Wednesday and found the ride pretty good for an entry-level shoe. The 9 series MSRP is $160; men's sizes are 25 inches and 30 inches; women's are 23 and 27.  Keep an eye out 9 series snowshoe kits (shoes, poles, carrying tote) for $200.

Eason Snowshoes is adding a minimalist running snowshoe called the V02 Comp that lets you attach your own running shoe directly to the snowshoe deck. They'll weigh a scant 1.2 pounds apiece, meet all USAA racing requirements, and retail for $299; max weight is 180 pounds, so I'm guessing the company calculates a very small likelihood of snowshoe runners weighing much more than that.

22 — This lightweight running snowshoe marks a significant break for Kahtoola: its first with traditional bindings (vs. the step-in bindings it has sold over the years.) $239.

Mountain 24/28 — This backcountry shoe will use Kahtoola's upgraded SkyHook step-in binding. The SkyHook will have an eight-point crampon that straps to a boot or shoe. The crampon has a step-in, quick-release system that allows a hiker to walk on hard-packed trails and switch to snowshoes only when deep powder requires more flotation. 24-inch, $279. 28-inch, $289.

MSR Lightning and Evo snowshoes will look the same from a distance, but new binding designs will change the view up close. New five-inch flotation tails ($50) also will be available for the Lightning shoes (alas, they aren't backward-compatible with older models). Here's a quick look at the variations: 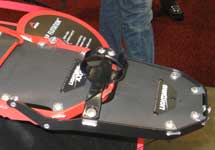 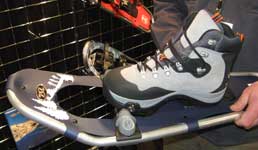 Step-in shoes allow quick removal of the snowshoe deck, which is handy when the terrain changes and snowshoe flotation isn't required. The catch is you have to buy a boot specifically designed to clip into the snowshoe. TSL's snowshoe will sell for $139, while the boot will go for $189.

TSL's French partner is releasing a composite-deck shoe with an intriguing design: while many shoes can adjust the foot angle to accommodate going uphill, the new 418/438 Access series will be able to shift its deck for going downhill. It's expected to retail for $189. 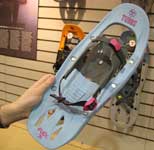 Tubbs is making a play for younger snowshoers next winter:

Yukon Charlie's new 930 snowshoe will offer plenty of flotation in its 25- and 30-inch lengths (the 25 is the women's model). The no-nonsense design is typical of the Yukon Charlie's line, which offers an economical choice for families. $109-139.