Day Three of Outdoor Retailer dawned with breakfast at the Conservation Alliance, an organization of companies in the outdoor industry (including our own Trailspace), dedicated to preserving the environment and places we visit for outdoor recreation.

These companies donate time and money to support grassroots efforts such as returning dammed rivers to free-flowing; preserving natural areas from development, mining, and other activities that degrade the wilderness; and educating the public and government officials on the values of preserving these special areas, including the economic payoff protecting such places for recreational uses such as backpacking, climbing, and river running. 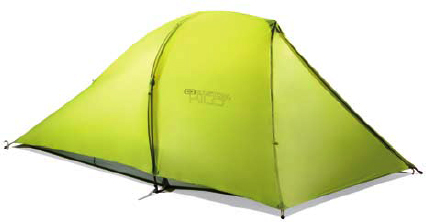 After breakfast, I headed to the Easton booth with Alicia to learn about Easton's new ultra-lightweight tents and new carbon fiber products. (You can read Alicia's coverage of Easton's new poles, tents, and trekking poles here.)

I have known Easton primarily for their excellent aluminum tent poles. Carbon fiber poles for tents and for trekking and ski poles can be stronger, bending farther than aluminum without permanent deformation or breaking. However, when carbon fiber poles break, they leave a fibrous mass that is difficult if not impossible to repair in the field.

The new Easton tent poles with the AirLock connection system address this risk by using small, lightweight connectors designed to break before the poles do. These connectors are easily replaced in the field by carrying spares. The lightest tent in the Easton line is the Kilo, a two-person, three-season tent that weighs 910 grams (about 2 pounds) with tent, fly, poles, and pegs. 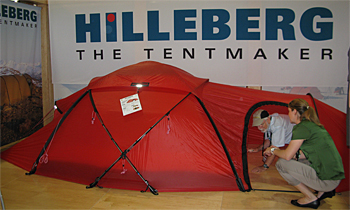 The Saitaris is designed for base camp use in high mountains, above tree line, and arctic environments. Because the Saitaris is too large to reach across for clips, a full sleeve plus a sleeve-and-clip system is used. It has one standard and one expanded vestibule.

Petra Hilleberg, who runs the North American operations of Hilleberg, told us that Hilleberg storm-tests its tents out in the open with a wind machine set on full blast to simulate a 60-65 mph wind (most manufacturers use a wind tunnel with the tent already set up, anchored to the concrete pad rather than on the ground). 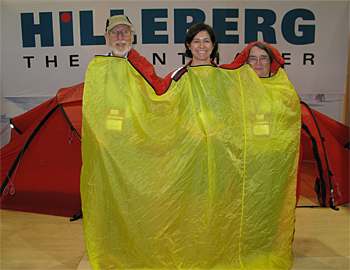 Bill, Alicia, and Barb try the Hilleberg Windsack emergency shelter on for size.

Alicia, my wife Barb, and I also got to "try on" Hilleberg's updated three-person Windsack wind shelter. Originally conceived as an emergency bivy bag for up to three people, it can be rigged various ways and be used as a temporary emergency shelter for ski touring or hiking or climbing trips if it looks like a storm is moving in. The front (yellow) is windproof, water repellent, breathable nylon. The back (red) is waterproof silicon-coated nylon. 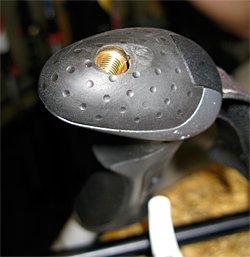 The day before, I had a brief visit at Leki with Trailspace member Elder, who gave me a quick once-over of new pole developments. This time, Alicia and I saw these features in much more detail. One of the most intriguing is a pair of camera attachment systems, one a conversion kit for a number of existing Leki poles and the other a more dedicated photo/trekking pole.

For the conversion kit, pop out the detachable section at the top of an ergo grip, and replace it with a conversion piece threaded for a standard size photo mount (see photo at right). When you're not using the mount, you can cap off the opening. The kit will retail for $29.

Leki's four-section monopod pole has a short section atop the handle that is removed by a twist-lock, revealing a more substantial camera mount. You can use it as a camera monopod or hold it in front of you, to take self portraits. When a camera is not mounted, the pole handle looks and works like a regular Leki pole. 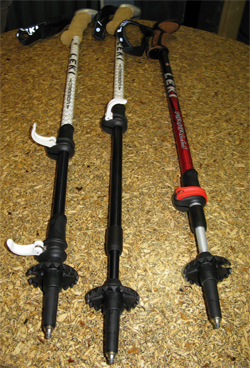 Earlier this year, Leki introduced its new external locking mechanism, the SpeedLock. Previoulsy, Leki was unable to combine a shock absorbing system and the SpeedLock on the same pole. Leki has solved that problem with a new anti-shock pole that uses a SpeedLock up top and a twist-lock below.

The Cressida women's pole will come in a regular ($119) and anti-shock version ($139) for spring 2011. The Corklite unisex version is a little longer, with larger grips.

My Polar heart rate monitors have served me faithfully for many years. But a few months ago, my old Windows XP computer died, forcing me to buy a new 64-bit Windows 7 machine.

To my annoyance, a number of my widgets, including my Polar HRMs, won't talk to Win7/64 bit. So I visited with Polar to find out what's going on. The short answer is that their current HRMs have now been tested with Win7/64 bit and are compatible. Even though this means buying replacements for my old faithful widgets, there are several improvements in the functions.

Now those who train with Polar heart rate monitors that have distance and altitude capabilities can continue to have the coaching and training capabilities, but in an updated and expanded form. 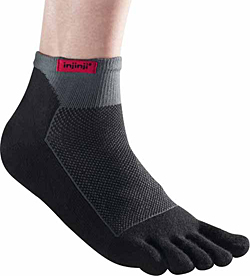 Injinjithe toe sock company, continues to expand its line. The first injinjis were anklets, but the newest ones reach up to calf height and higher, which works better for boots. Some have wicking fibers. A number of users (including me) have realized injinjis offer many benefits for climbers, backpackers, and runners, including reducing the buildup of callouses.

I gave a close look at the Coolmax and Merino wool versions, both intended as liners inside heavier socks to wear in boots (the Coolmax version also is a support sock). I'm looking forward to seeing how they perform on actual hikes while carrying a backpack.

The newest addition to injinji's line is a Midweight Performance Toesock (at right), with a 360-degree cushion knit sole for extra cushion in the heel and sole when hiking, climbing, or running. The socks will retail for $16 in November. Injinji's NüWool socks also will be offered in more lengths, including mini-crew (for trail runs) and over-the-calf (for skiing).

An injinji rep told us that the barefoot, natural running and hiking footwear trend has supported injini's mission.

At Bluewater, I discussed recent changes in standards for climbing ropes with Bluewater's Scott Newell. New standards are being formulated for a broad range of technical climbing gear and many other items.  In addition to the well-known CE and UIAA standards for ropes, the NFPA has set standards, particularly for ropes that will be used for ropes courses and rescue applications.

All of this improves performance and safety across many applications. One application for me is in climbing and rappelling with Boy Scouts. You no longer can use just any old "rope." Climbing ropes must meet numerous standards for falls, maximum impact, resistance to heat (from friction through belay and rappel devices), and many other potential risks. Rappel lines have a separate set of standards.

And of course, like all standards, the certifications must be printed on labels that accompany the gear (in some cases, standards even establish the type font and size).

It was good to see you and to meet your wife at OR.

Have a safe trip home.

Do those changes in the standards primarily relate to the technical functions, specifications, and limits of the rope? Or do they also concern the methods of testing for those specifications and limits?

I am not currently involved in vertical rope work on anything more than a personal recreational level, but I am always interested to know of changes like these.

Thanks for your OR reports

I really like the ides of the camera mount on top of a hiking pole. I've often considered tapping one or mine or drilling it out and dropping in some like this coupling nut.

Slightly blown away by the Hilleberg Saitaris. Would be interested to see what type of stakes they are using in their "real world" testing and in hearing if they've setup the tent in those wind speeds.

All in all great reporting and a big tahnsk to trailspace for getting so much OR info out to the masses.

The standards are continuously being updated, particularly the testing methods. There is an attempt to make the testing methods more relevant to real-life usage. For example, years ago only the static breaking strength was measured. When it was realized that in a climbing fall, the stretch of the rope absorbs the energy of the fall, a limit on the maximum force (due to the elasticity) was added. Since ropes used on big walls may be subjected to multiple falls, specifications on number of falls held before failure were added, as well as specifying that the fall would be over a rod the diameter of a carabiner (and, this meant that carabiner bend radius has become a standard). Because climbing ropes are sometimes used as a single rope, or a double rope (both strands together through all pro), or twin (two strands through alternating pro), specifications developed for the different usages, along with testing methods.

The specifications and limits have been modified as well, with new abrasion specifications and heat/fire resistance (lots of heating when rappelling long distances - the old 11mm ropes had more surface area that the new 9mm ropes, although both may meet the single rope specs for force limit and number of falls).

The NFPA ratings are new, at least to the climbing world, with the result that ropes will now come with 3 sets of specifications and labelling. Work remains on the question of specs for falls over sharp edges.

Being that I live in the heart of the TAG region, regarded as the caving mecca of the world, I have been involved in caving on and off over the years. So I am familiar with North American Rope Techniques and topics as they apply to private recreational activities. But I am by no means well versed or up to date on the recent changes to those standards, as they more directly effect SAR, commercial, and organized recreational groups.

I hold very high standards of safety and proficiency for myself, but I am not active enough in the vertical rope communities to keep abreast of all the changes and advancements.

Acquiring proper training and certification in vertical rescue is something that I would like to do someday. I have been very fortunate to live in the same town as Bruce Smith and have access to his knowledge and OnRope1- he is a remarkable fellow. So if my life does allow me to get more serious and go for certification, I couldn't ask for a better place to get it.

I actually told Petra (Hilleberg) at OR that that's exactly what a lot of our members say about Hilleberg tents.