It may be the dark days of winter, but there's no shortage of illuminating products to light your way on the trail, the road, or in camp. Here are a few highlights in the headlamp category shown at Outdoor Retailer Winter Market last week. 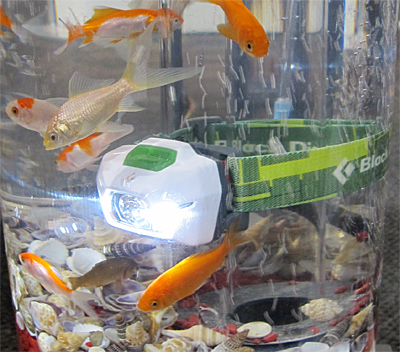 Black Diamond has introduced the Storm, a headlamp waterproof to one meter.

The Storm has a series of five graduated modes. It begins with a red light start-up and gradually increases in brightness to avoid dazzling unwary hikers. It also features a red night vision mode with two sub-modes, and a lock mode that keeps the headlamp from being turned on accidentally in your pack or luggage.

The Storm's designer routed the heat sink that dissipates the heat from the LED's back into the battery chamber, keeping the batteries warm, efficient, and condensation-free. This feature should be particularly useful in sub-zero environments that challenge battery life and performance. 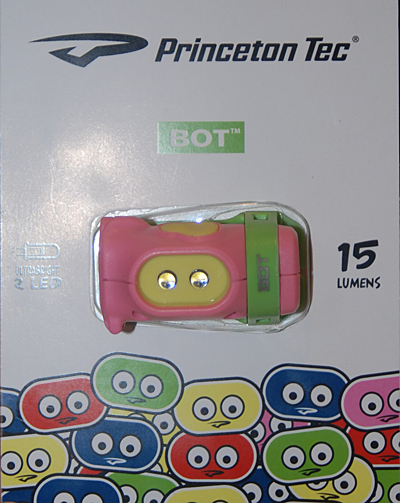 Princeton Tec is introducing a new kids headlamp called the Bot. I hesitate to call anything cute, but this is the most accurate description of the Bot.

The Bot has notable kid-friendly features. The button is quite large, and the battery compartment screws shut to prevent the batteries from being easily removed.

The Bot is available in four colors, and kid-themed packaging. At the same weight as Princeton Tec's ultralight Byte, the kids' model has 20 fewer lumens of light output, but a kid-friendly price.

While Petzl wasn't introducing any new lights, the company had two interesting products.

For sheer power, the Ultra line has the brightest lights in Petzl's lineup. The Ultra and the Ultra Wide both are designed for adventure racing, caving, and other applications needing massive illumination. The Ultra Wide has slightly lower output, but a much wider beam spread (180 degrees), making it useful for illuminating wide areas.

The Ultra delivers a searing 350 lumens, or as Petzl's Justin Roth puts it, it's "brighter than a motorcycle headlamp." 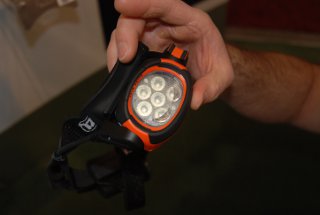 Though Trailspace covered it at Summer OR, Roth gave me an in-depth demonstration of Petzl's Core rechargeable battery pack, available as part of the Tikka XP2 Core headlamp, or as an accessory compatible with second-generation Tikkina 2, Tikka 2, and Zipka 2 lights. 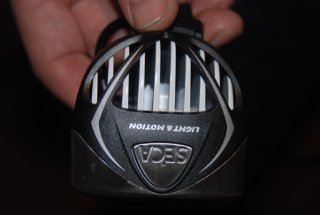 Light & Motion would earn my personal award for brightest headlamp at OR. Their SECA 1400 delivers a blistering, tanning-booth-worthy 1400 lumens of broad, bright light. At 579 grams, and more than $700, this is a headlamp for a serious illumination connoisseur.

Lighter, and less bright (won't cause a sunburn), is the Solite 150. It's got a clean, functional design and mounts easily on a head strap, a bike handle bar, or functions as a flashlight.

Watching Daniel Emerson convert this schizophrenic light into three forms, I made a mental catalog of my headlamps, bike lights, and flashlights.

Time to downsize? With this light, I don't think I'd miss any of the others. 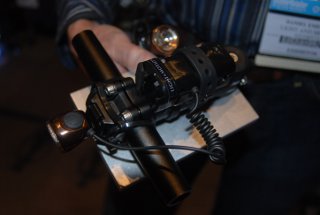 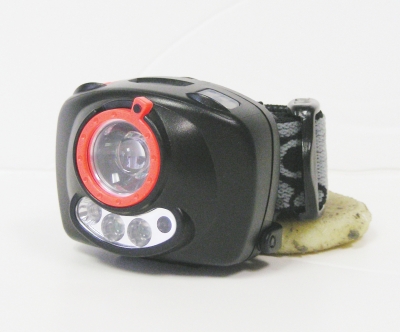 OR was abuzz about the new Magik 1R by Genesis. Think of it as "The Clapper" of headlamps, but rather than clap, you wave your hand quickly in front of the built-in motion sensor to turn the light on or off, touch-free.

The Magik 1R can be adjusted from 10 to 100 percent brightness of white light. It also features red LEDs for night vision and an SOS flashing mode for emergency use.