OR Day One: Around the Foot, Side, and Kitchen

Day One on the Outdoor Retailer show floor turned up a number of innovations: 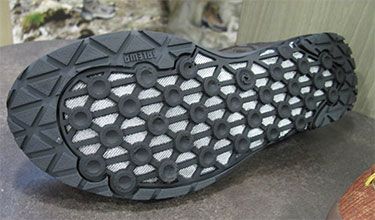 Gore-Tex's Surround footwear technology has been available in Europe for several years, and is starting to trickle into the North American market. As its name implies, Surround provides a waterproof-breathable barrier that completely surrounds the foot on all sides — including on the sole of the shoe.

A highly perforated outsole allows the shoe to breath, while a layer of thin metal mesh protects the waterproof-breathable membrane from abrasion or puncture.

The first Surround shoes available in North America will be Salewa's casual Rambler and Escape, but Gore says to expect the technology in a variety of trail running and hiking shoes come 2015.

New for 2014, Bergans of Norway is introducing the Rondane 6L, a hydration pack designed with trail running in mind. It features Bergans's patent-pending Rock Solid Stability System (RS3), which adds a secondary sternum strap and small straps that wrap around your sides to help keep the pack positioned correctly on your back.

Keith Patterson demonstrated for us:

Optimus is rounding out their line of camp kitchen accessories for 2014 with the addition of a canister stove wind screen, two lighters (piezo-powered Sparky and butane Burny), two long spoons for use with freeze-dried meals, and even a sponge for your nonstick outdoor cookware.

Also Around the Show

Petzl's popular Tikka headlamp line will get an overhaul for 2014. All models, including the Tikka, Tikka+, Tikkina, and Zipka, will feature new and significantly brighter LEDs. The Tikka will also get a nifty glow-in-the-dark feature. Check out the photo and details on our Facebook page.

Columbia will be re-branding its PowerDrain shoe the PowerVent, and bringing the technology to more models for 2014. Originally designed as a quick-draining water shoe, Columbia found that customers valued the ventilation that the large drainage channels provide when used on dry land. The company is responding by adding the technology to a wide range of models, from casual to trail shoes.

Camelbak is taking serious aim at "cleanability" in their water bottle designs. The 2014 Podium line features a wider and easier-to-clean squirt nozzle, and ease of cleaning was a key design consideration in the development of the new Chute and Forge bottles. The Chute features a moderately-sized spout (think soda bottle size) atop a wide-mouth cap. The Forge will be (somehow) Camelbak's first-ever vacuum-insulated bottle.

Want more photos? Check out our ORSM Day 1 Photo Album on Facebook for more shots from the day.