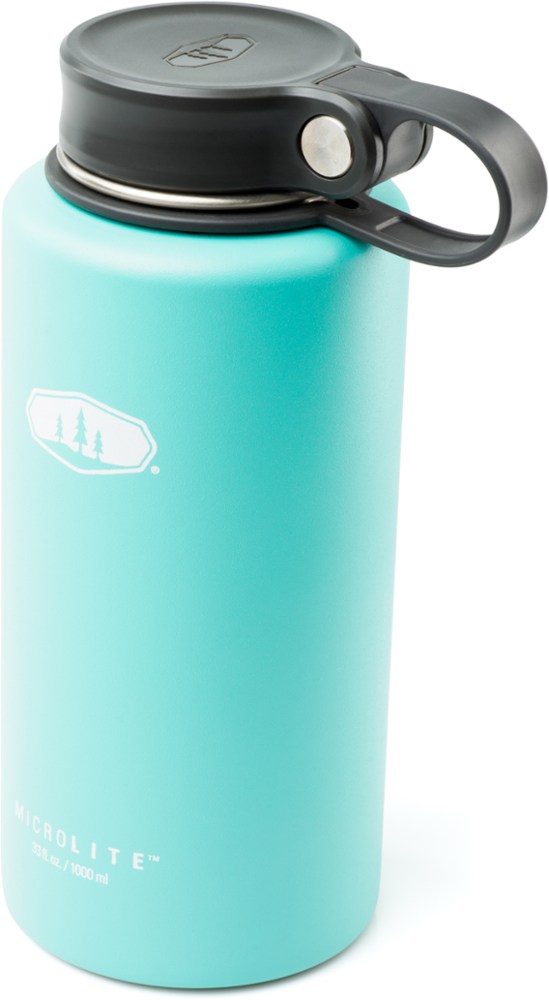 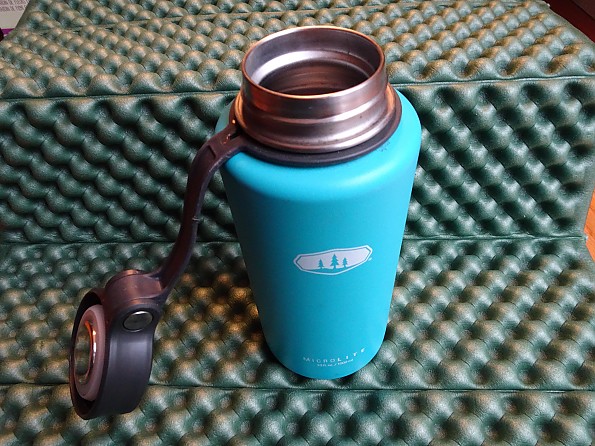 GSI used a double walled 18/8 stainless steel design to give this thermos a claimed 18 hours of heat retention and 32 hours for cold. The super thin 2mm profile keeps the bottle size down yet provides great insulation. The exterior has a textured surface applied which gives the bottle its color and makes it easy to grip. GSI offers the 1000 Twist in nine colors: White, Black, Teal, Fuchsia, Brushed Stainless, plus Watercolor, Olive and Apple Greens 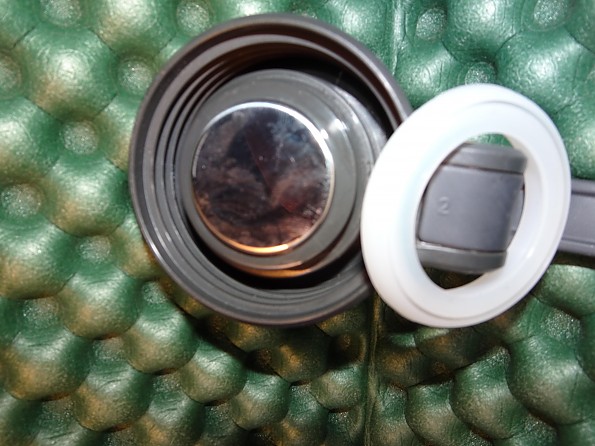 Lid with inner seal removed. Note the deep threads on the lid and the stainless steel stopper

The well designed lid is a big key to this bottle’s function. Many insulated bottles have problems with heat transfer via the lid, but GSI uses an insulating stainless steel plug in the lid to seal off the top of the bottle. There is a silicon seal that can be removed for cleaning giving full access to the rest of the lid as well. The lid is fully secured by the deep threads on the inside of the lid.

The lid is attached to the bottle with a tether that also acts as a lever when opening the bottle. This appears to be a permanent attachment so I didn’t force it off to see if it was possible to reattach. 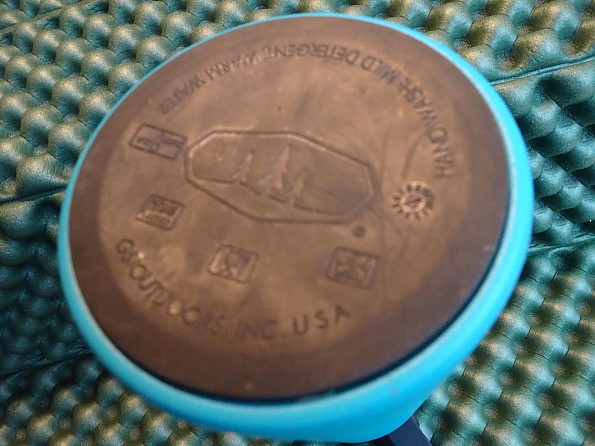 I performed two tests at home for heat retention and one for cold using crude instruments, but I think what I found will tell you what you need to know about this bottle.

For cold testing I filled the 1000 Twist almost to the neck with ice cubes, then filled the bottle to the top with cold tap water. The bottle was kept in an environment that started out at 89°F, fell to 78°F over night, and then returned to 88° the next day. The bottle was opened several times during the test to check ice melt progress.

After six hours there was just a large, fused hunk of ice in the water. At the 18-hour mark there was still a large mass of ice. I continued to check the bottle and finally called an end to the test after 40 hours with a large chunk of ice still remaining.

Steel body and solid lid design combine to make a bottle that is packable and droppable. Exterior wipes clean and shows little signs of wear. The lid tether did acquire a cut or nick, but that hasn’t grown larger over time. Pretty sure that happened when it got caught on a rock as I was going down the trail.

The lid design lets hands easily open and close the bottle. The tether can be used as a lever so even small hands can twist without much effort. (My wife and daughter helped test that.) Wide open top is great for pouring contents into a cup or down your throat. That wide opening also makes cleaning easier both in terms of seeing inside and getting a bottle brush in there. The removable silicon seal is vital for keeping things clean and I found this larger one easier to remove than the one in the 500 Twist. I had no problem removing it without a tool despite my giant fingers. 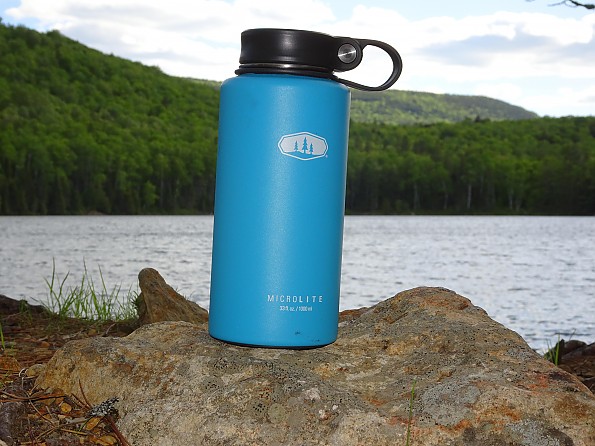 I used this bottle on all of my backpacking adventures over the last five months and on a lot of day hikes as well. It was part of my two bottle hydration system, carrying cold water for later in the day, or holding a half strength Gatorade mix.

Like the Microlite 500, I found the 1000 Twist surprisingly low profile for an insulated bottle. The 2mm double walled construction provided great insulation without making the bottle bulky. This allowed me to use the bottle as one of two that make up my primary hydration system on trail because it fit into my Aarn Sport Pocket. 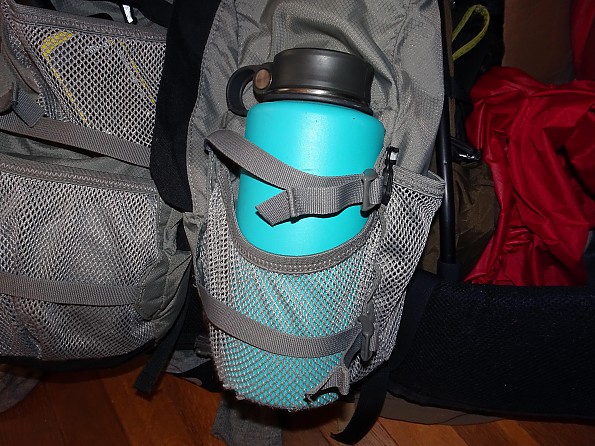 Despite the 1L capacity the 1000 Twist fit into side pockets on my Osprey, Kelty, and Seek Outside packs. Here you can see it in the Aarn Balance Pocket where I usually carried it.

Part of the time I used the bottle to keep water cold for later in the day, drinking from the uninsulated one first. When weight was more of a concern I’d leave the 500 at home and use the 1000 Twist for half strength Gatorade. The weight penalty of the bottle seemed worth it whenever I found myself enjoying a cold drink late on a hot day. With the cold weather setting in I have a feeling that filling this thing with tea or cocoa will make for some very happy breaks on family snowshoe outings this winter.

I was happy that the lid seal on this larger bottle was more manageable for folks like me with big fingers. That ability to remove that seal for cleaning is one of the features I really liked about these bottles. The ring that holds the lid tether to the bottle did tend to collect dirt or ice at times. This would work out with a bit of wiggling, but was one of the few negatives I found while testing this bottle.

With the MSRP around $35 and discounts to be found it isn’t a huge investment. Given the durability and ease of cleaning I’d expect to get years of use. Obviously this bottle isn’t for those whose primary concern is weight. Those who are willing to pay that price in return for the joys of a warm drink on a cold day or a cold one on a hot day will appreciate the Microlite 1000 Twist. I’m comfortable recommending this particular bottle and the Microlite line in general as being worth a try if you are looking for an insulated bottle.

5 months of testing with extensive use backpacking and day hiking.

Source: received for testing via the Trailspace Review Corps (Sample for testing and review provided by GSI Outdoors)

Nice review, LoneStranger. While I typically think of GSI as being at a better price point than most of their competitors, this one is not so much. Hydration specialists like Hydroflask, Miir, and Klean Kanteen are at this price for their ~1L insulated. At that point, I guess it comes down to lid and shape, as well as warranty and ease of replacement parts.

Nice review, LoneStranger! I go back and forth in how much I think a water bottle should cost, though in reality, trusting one is leakproof and if insulated that it works is what matters.

I looked at the prices for titanium bottles last year when thinking about switching to metal. That seems to have left me thinking that $35 isn't all that expensive heh. @Kiwi I never really thought about GSI that way, though it may be true. They make stuff that functions in my experience, but isn't premium priced would be more my take on them.

$34.95
Buy Now »
$24.47
Buy Now »
Help support this site by making your next gear purchase through one of the links above. Click a link, buy what you need, and the seller will contribute a portion of the purchase price to support Trailspace's independent gear reviews.

Our community of gear reviewers has field-tested and rated the top water bottles available.