As Outdoor Retailer wound down this weekend, here are a few more outdoor gear highlights from the show: 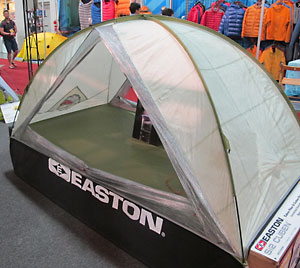 The Easton Si2 Cuben tent is a single-wall expedition tent made of Cuben fiber and waterproof-breathable eVent, supported by a freestanding carbon fiber pole system.

Originally shown as a concept tent at a prior show, the Easton folks had to scramble to make it production-ready when retailers showed significant interest in actually stocking their high-tech creation.

The production version of this two-person mountaineering shelter weighs in at just over two pounds and will retail for a jaw-dropping $2,000.

If you're a frequent headlamp user, you know that the light doesn't always shine exactly where you're looking. You end up adjusting the tilt on the light, or making awkward head movements to aim the light where you want to look. This is because when you change the direction of your gaze, you move your head some in that direction, but you move your eyes further, and the beam of the headlamp doesn't keep up.

Snow Peak has a novel solution to this problem in the new Mola headlamp. When you shift your gaze up or down, the light in the Mola will tilt slightly further than your head does, more closely matching the movement of your eyes. This trick is accomplished via a small counterweight inside the headlamp; Snow Peak is calling the technology "optic motility."

Nate Borne gave us a brief demonstration of the technology in action: 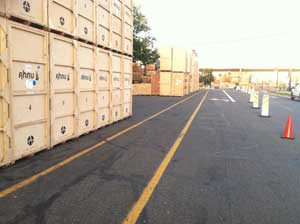 And that concludes our on-site Outdoor Retailer coverage. Thanks for tuning in!

The show halls were quieter Saturday morning, as attendees began departing Salt Lake City. Later in the afternoon exhibitors began breaking down their booths and packing them into crates, trucks, and trailers for transport to storage or their next destination.

We’ll do it all again at the winter show in just six short months, and you can help. Let us know what you liked, and what you didn’t like, about our show coverage.