Friday, Day Two, started with the Conservation Alliance breakfast. The featured presentation was a report by James Balog on the Extreme Ice Survey, a project to gather time-lapse photographic documentation of the changes occurring in glaciers around the world.

After the presentation, I set out on a mostly “watch” day. 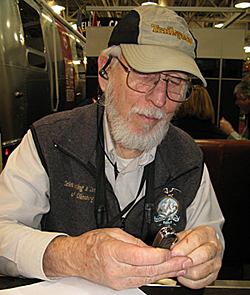 Bill looks at the Victorinox line.

Alicia and I met at the Victorinox booth to view the latest in Swiss Army knives. The new knives issued to the Swiss military are larger (111mm) and have a different set of tools than previously. An interesting bit of trivia is the difference between the Soldier and the Officer knives. The Soldier version has a Phillips screwdriver, while the Officer version has a corkscrew instead. Both currently have a one-hand locking blade and wood saw, plus several other blades and the traditional tweezers and toothpick.

Some of the other specialized knives were the Rescue knife (includes a punch and glass saw to cut through the windows of a car and a seatbelt cutter), a specialized electricians knife, and a cybertool, with all the implements needed for a computer. The USB tool (flash memory) now comes in a Presentation Master version with blue tooth, 8, 16, or 32G USB drive, and 300-foot laser pointer (and, of course, toothpick and tweezers). And all versions of the Flash come either with scissors, knife blade, and nail file or in a Flight version with no blades for carrying on plane flights. 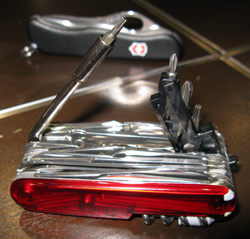 Of greater interest to Trailspace reader are the Tinker, Camper, Hiker, Climber, and Angler series in their basic, Super, and Deluxe configurations. Interestingly, our Victorinox hosts commented that the multi-tool versions with corkscrews are more popular with people who consider themselves more “cultured” and the versions which have the Phillips screwdriver instead consider themselves more “doers.” Yet the blade with the combination can opener and a small screwdriver can also be used for Phillips screws.

And, yes, we did get to handle the incredibly large, 80-feature SwissChamp XAVT (at right), which retails for $425.

Later we went to see Wenger (the "other" Swiss Army Knife). Both Victorinox and Wenger are official suppliers to the Swiss military (and both are owned in a complex arrangement with the Swiss government by the same family controlled trust). 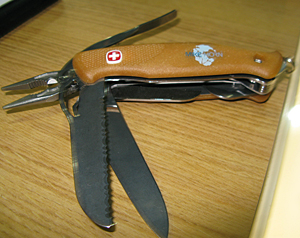 Wenger has numerous knives and multi-tools of interest to the Trailspace reader and similar in function to the Victorinox ones (that is, backpacker, climber, hiker, and angler oriented versions), but with some unique differences in the material from which the scales — the side plates — are made.

One knife we saw was the Mike Horn Ranger (at right), a special multi-tool designed for explorer Mike Horn's current four-year Pangaea Expedition around the world. We also were shown knives in the Alinghi series (Alinghi is a world champion yachting team). These large knives had several specialized features of interest to the yachtsman (sail variety, not motorized), including a marlin spike, locking one-hand serrated blade, and useful needle-nose pliers. Another brand ambassador line is the Wenger Patagonian Expeditionary Race (WPER) line.

When we asked about typical backpacking knives, we were pointed to the Evogrip version of the S18 WPER. Evogrip is Wenger's version of a non-slip grip, something knife manufacturers are finding a desirable change from the slick plastic that so many have used over the past 30 or 40 years.

We also looked at selections from Wenger's watch line. We were shown the Swiss Raid Commando Competition watches ($425 category; “raid” is a European, especially French, term for an off-trail race). There are several watches in this series of quartz (electronic) watches, including an LED digital compass watch, with the watch part being analog hands and the compass being a digital display in the face of the watch.

My time at Timex was spent primarily on their Expedition series. These watches include both purely digital and analog models. The original Expedition Timex was designed for mountaineers, in large part by Conrad Anker. It features a wide-screen display of time (two zones, one digital, the other a digitized analog display), temperature, and a selectable altitude, barometer, or date display. A graphical display of history can also be displayed, as well as a compass. The display is large enough to show a number of these functions simultaneously.

Because a watch or in this case, complex instrument on the wrist can get in the way when climbing, there is a new version with a carabiner clip in place of a wristband. The carabiner version (shown second from left, with the strap version). The new analog version comes in an electronic compass, a tide-temperature, a combined compass/tide/temperature, and an analog altimeter version.

I will be testing the carabiner digital and the analog altimeter versions over the next couple of months in actual field usage. In both cases, a careful study of the instruction sheets is required to sort out all the functions.

At the Suunto booth, I was updated in detail on the new Core line of Suunto wrist-top computers, as they term them. The series are all the same functionally, but in differing styles. The main guiding functions are there as in the T (training) series and the X series: altitude, barometer, compass, stop watch, and time logs of each. Depending on the user-set intervals, the logs (maximum of 10) can record for an hour or so (short intervals) or days (long intervals between records). Sunrise and sunset times are added for a number of locations on Earth (mostly in the US), and a depth meter for those diving (not scuba depths, though).

The big new thing throughout much of the Suunto line is the ability to maintain a very accurate reading dependent on activity. Basically this works by sensing the character of pressure changes to switch between altitude recording while moving and barometer mode while stationary.

Another new item is that the workhorse Vector will now come in a heart rate monitor version (the Core series does not have an HRM version). The T series is the one with the full heart rate monitor mode and the auxiliary pods for pedometer, bicycling (speed and cadence), and GPS-based distance and speed monitoring modes. The X-series and the specialized G (golf) and M (marine) series continue much the same.

Testing out the RidgeRest Solar with a NeoAir on top of a cold bench.

I did see some gear besides watches and knives. At Cascade Designs, I asked in detail about the Therm-a-Rest NeoAir mattress, prompted by a recent inquiry on Trailspace. As I had suspected, it is an air mattress, but with a difference. Because of the internal construction of the transverse air chambers and the reflective separator between upper and lower halves of each chamber, convection is much less than with conventional air mattresses, giving it an R-value of 2.5. The Pro-Lite self-inflating Thermarests have an R-value of about 3.5, as does the new aluminized RidgeRest Solar.

Cascade Designs considers the NeoAir to be a 3-season compact and light sleeping pad, not suited by itself for sleeping on snow (they had a chilled bench on which I lay on both a Neo and a RidgeRest Solar: in 5 minutes, the Neo was definitely cooling off, while the RidgeRest was significantly warmer). The Neo in combination with a RidgeRest could be usable in mild winter conditions, but for deep winter, or Arctic or Antarctic conditions, you would sleep very cold. 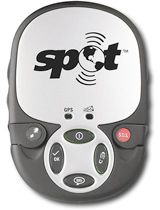 SPOT 2 has remedied the problem that triggered a voluntary recall last month. The issue was a firmware problem that resulted in a “low battery” indication when several days of battery life remained. This did not affect the actual operation of the unit. The fixed unit is now being shipped to stores.

We also discussed the new SPOT-DeLorme combination of the new DeLorme PN-60w and SPOT Communicator that will allow more free-form text communication than the standalone unit. Users can leave the SPOT at a location, carry the PN-60w, and still relay messages several miles away (a version of WiMax is used for the link). The combination should be available in a few months.

We also discussed a problem that has been the subject of extensive threads here on Trailspace, namely the question of responsible usage and the related question of hikers and climbers being required to carry some sort of locator beacon. We agreed that the responsible usage question is largely one of education. Since this is a thorny question that has been discussed on Trailspace, I will reserve further comment until I return home and can do a more thorough article. I will note SPOT is considering an education and publicity program to promote responsible usage.

I had a brief visit with the General Electric folks about their eVent product. They continue to improve the breathability and transpiration properties. We also discussed the question of eVent usage in tents. GE does not support such usage because of the difficulty and expense of meeting the fire regulations in a half-dozen states, including my home state of California.

A very sticky liability issue is the question of someone buying an eVent tent in one state, say Nevada, and hiking into a state where the tent has not been certified as passing the tests, say California, where the regulations are much stricter (test procedures, in particular). If the hiker is careless enough to set his tent on fire (something possible with any tent fabric), is the tent manufacturer, fabric maker, or store which sold the tent liable for an incident in that other jurisdiction? Most manufacturers do not want the risk, especially companies perceived as “deep pockets”. Yes, a careless person can become a Darwin statistic with a jacket, bivy, gloves, or any of a number of fabric applications. But the fire regulations do not block those uses.