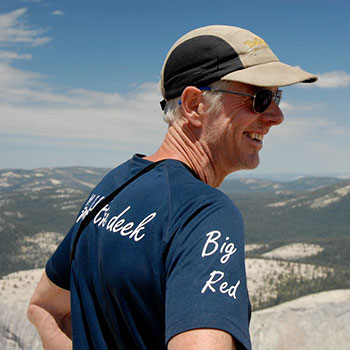 Big Red on the John Muir Trail this summer.
(Photo by Pennie Rand)

Each month we recognize and get to know a different member of the Trailspace community.

Congratulations, Rick, and thanks for sharing your many helpful gear reviews and trip reports with us over the past decade.

For his contributions, Rick wins this month's featured Reviewer of the Month prize, a Grayl Water Filtration Cup and G3+ Purifier cartridge. Plus, we're sending him a pack of goodies including a Soto Pocket Spork, energy bars from A3, Clif, and Kind, and a Trailspace hat for his collection.* 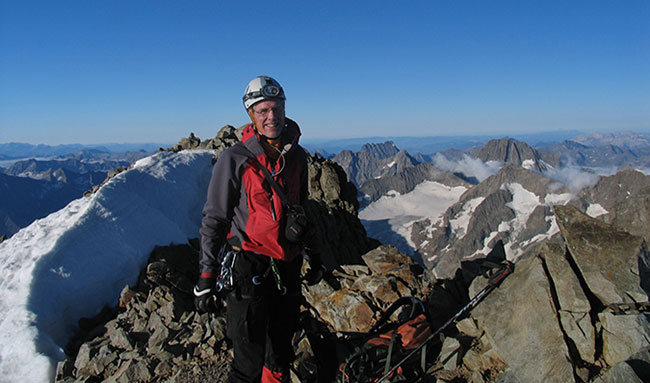 Tell us about yourself.

I'm a plant ecophysiologist at the Norwegian University of Science and Technology. I'm especially interested in the winter ecophysiology of spruce, pine, and other conifers. I moved here in 2002 from our previous home in Vermont with my wife Nancy and daughters Molly and Zoe, then 11 and 7. Ralphie, the Best Dog Ever, joined us in 2003. 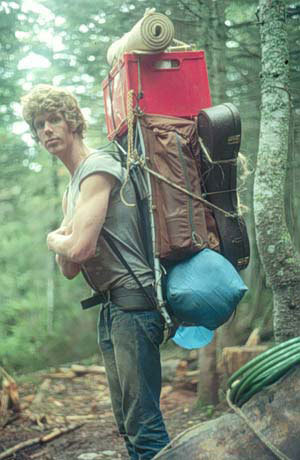 On the White Mountain National Forest trail crew in 1977.

I grew up on the Massachusetts north shore, spending most of my summer days on the beach or in various wooded areas around town. Started downhill skiing in the White Mountains when I was 8, car camping with my dad a little later.

I really got the bug when we day-hiked Chocorua when I was 15, and toward the end of that summer my dad and I had a hilarious (in retrospect) misadventure on Franconia Ridge where we did all the right things wrong, but survived and learned from our mistakes. By the end of the next summer I was a backpacker.

See my contribution to the "Share your crazy travel stories" thread.

There's a piece of my heart at Lake Mintaro, in the shadow of Mt. Balloon near Mintaro Hut on the Milford Track in New Zealand, where I was the hut keeper for two seasons in '78 to '80.

Describe your happiest moment outdoors (and/or proudest or hardest).

Happiest? That's a hard choice. Maybe it was summiting said Mount Balloon on a rare rainless day in Fiordland, with my Kiwi friend Paul and Mike G., a Coloradan that happened to be staying at my hut at the time. It's a class 4 climb up a beautiful steep knife edge, and by then I had been looking up with longing at the mountain for a season and a half.

Or maybe it was a canoe trip on Lake Umbagog [New Hampshire] with my (now) wife, back in our earliest courtship days.

Proudest: Summiting Mt. Washington via Tuckerman Ravine on a pretty windy day with Molly when she was 7. We've shared many summits since then, but that was the first big one, and we did it in somewhat rough conditions. We descended via Lion's Head and were late for dinner at Pinkham (not the last time we were late for dinner for similar reasons).

I have had many similar proud moments with Zoe (or both or the whole family), and she really showed her stuff on the John Muir Trail this summer, where she proved to be one of the strongest in the group.

Hardest: The 60 km ultra I ran with Molly shortly after my 60th birthday in June. 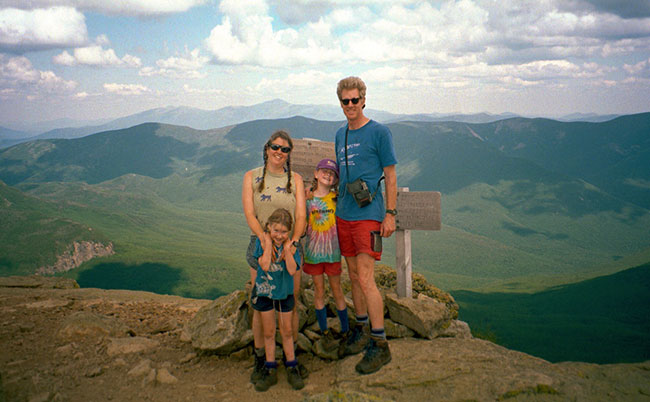 I can be impetuous and so have done some stupid things leading to near-epics, but I've never stayed an unplanned night out, and so far have lived to tell the tales.

Do you have any outdoor goals you want to share?

A list as long as my arm. Visit a Venezuelan tepui. Hiking in Iceland. Romsdalshorn, Stetind. The Haute Route, in summer and on skis. More alpine summits, not Mont Blanc, but maybe another try at Monte Rosa. The Wind Rivers. More slot canyons. Patagonia. Go back to New Zealand and Nepal with my family.

An early start on a ski ascent to a picturesque summit with good views, followed by a flawless descent in good powder or corn, with family or one or two good friends.

Actually, I posted my very first review [in 2004] to get some leverage on Dana because they were giving me the runaround about warranteeing a Bomb Pack. Because I live in Norway, they said I had to go through the international department, which just ignored me. The pack had already been repaired once and failed in exactly the same way, and it cost me a pretty penny to ship it to the U.S. for the unsuccessful repair.

I posted an honest account of my experience, sent the link to Dana, and within a day or two got an email promising me a new pack. I posted a comment under the original review to let people know that they finally decided to stand behind their product. Thanks for the help, Trailspace!

But over the years since I have benefited from TS reviews, and so started paying back (or forward), although I'll admit I'd just as often rather be out using products than writing about them!

What's your favorite piece of outdoor gear? Why?

Gear comes and goes. It's best not to get too attached. But my oldest piece of gear is the last remaining pot form my original Sigg Tourist cook set, purchased in about 1970 when I first started backpacking with my dad. It's been literally around the world with me, and is crusted with fire black from a lot of different places. My wife thinks it's disgusting. 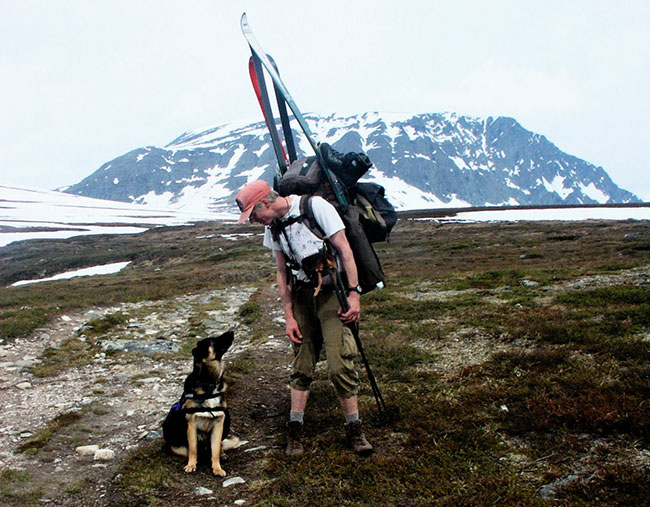 Got any good, bad, funny, or epic gear stories?

The time my wife's old Trucker ski broke spontaneously while crossing a dip in the trail, as we were coming out of Carrigain Notch [New Hampshire] late one winter afternoon, a long but routine day trip. I gave her one of my skis and we continued with me on one ski, scootering on the flats and balancing while running out the remaining easy downhills.

My ski leg got tired to the point of cramping, so I started switching legs by forcing my 75mm boot toe into the wrong binding, the old three-pin, round bail type. After we hit the unplowed Carrigain Notch road in near darkness with three or four easy miles to go, I heard a ping and felt my foot come free, thought the bail had popped, but found that the binding had cracked clean through and a big chunk fell off.

So we were down to two and a half skis for four feet, but managed to get down by scootering and double poling the rest of the way, barely able to see the track. Thirty years later, the 75mm boot is still the norm for most backcountry tele skiers, but I was an early adopter of NNN-BC.

What's in your backpack right now?

All the backpacking gear is neatly put away after debriefing and cleaning up after our JMT trip this summer, but I have a day pack ready to roll with rain gear, hat and gloves, compass, some trail bars, and probably a half-eaten chocolate bar down in there somewhere.

The "who" is my dad, for coming back into my life at the right time and providing guidance, in his own reserved way, when I needed it. And the "what" is definitely the outdoors, which is where I always have gone to get back to my center.

Ken Kesey's Sometimes a Great Notion, my nominee for the Great American Novel. I read it in high school, again while living in my hut in New Zealand, and again in the months before our trip west this summer.

In the non-fiction category I'd say Marc Reisner's Cadillac Desert is pretty righteous stuff, but there are many more. 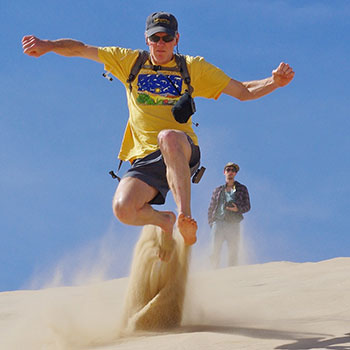 I don't agree 100 percent, but it's a purified extract of one aspect of rain forest ecology, and eloquent, and funny.

Where does your username come from?

My wife started calling me Big Red before we were married, and still does.

I was born in New Jersey.

Don't let all that gear get in the way of having a good time outdoors. 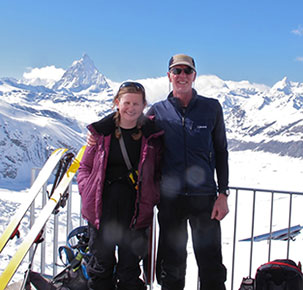 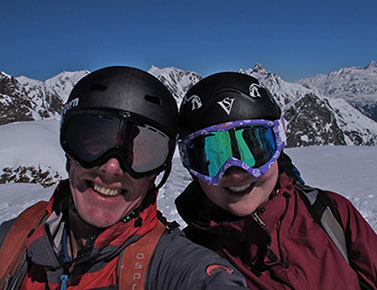 Thanks, and great job, Rick! 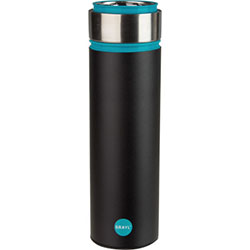 Plus, we're sending him a pack of goodies including a Soto Pocket Spork, energy bars from A3, Clif, and Kind, plus a Trailspace Trail Runner Cap and stickers.

Join the Trailspace community in recognizing other helpful reviewers by voting up the reviews you find most useful.

Write your own helpful gear reviews and you could be our next Reviewer of the Month.

Big Red would be one of my top nominees for Excellent Outdoor Dad.

I'm new, but I hope I can be helpful to the community.  Anyway congratulations Rick

BigRed, you're right that we have some excellent outdoor parents on Trailspace. It would be fun to recognize them all.

Congrats Big Red...great to learn more about you!

Great stories, thanks for sharing! I'm envious of your time spent as a hut warden on the Milford. I never got around to doing that hike, mainly because of the difficulty in getting a permit. Sounds like a great way to spend some quality time in the area.

Thanks Leah (and others).

I know a lot of people skip the Milford because of the permit hassle. I know I'm completely biased because I lived there, but I think it is a different and uniquely beautiful experience compared to the other accessible tracks in Fiordland (Routeburn, Hollyford, Kepler) all of which have their own unique charms. I never did the more remote Dusky Sound track, and my attempt to make the round trip to George Sound and back in a day didn't get very far -- very rough going! Still dreaming of getting back there one more time with the family.

Jumping in late, but congratulations BigRed! I always enjoy your reviews, and I echo Alicia's comments about outdoors dad!

Unfortunately, I too skipped the Milford Track when I lived in NZ for almost a year-and-a-half. This was mostly due to permit hassles like you mentioned and finding the time to do it. I explored the west coast a fair bit with friends while there, and after I returned to the States, they went ahead and did the Milford Track. They were kind enough to ensure me that nothing else compared. Great friends, huh? Still NZ had quite an impact on me, and by the sounds of it, you too.

What a magnificent opportunity to be a hut warden on one of NZ's Great Walks. Thanks for sharing.