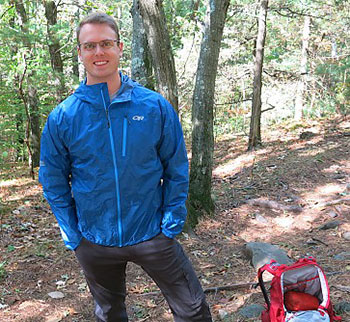 Congratulations to Brent Mills, Trailspace's newest Reviewer of the Month!

Each month we recognize and get to know a different member of the Trailspace community. This month it's Brent—lifetime hiker, former member of the Navy, and current software architect. Brent has been hiking, rock climbing, canoeing, kayaking, and camping since he was about 6.

For his contributions, Brent wins this month's featured Reviewer of the Month prize, a Rig 700M hydration backpack, In-Line Crypto Filter, and Nano Drink Tube, all thanks to Geigerrig ($188 value).

On top of that, we're sending him a pack of goodies, including a Trailspace Trail Runner Cap.* 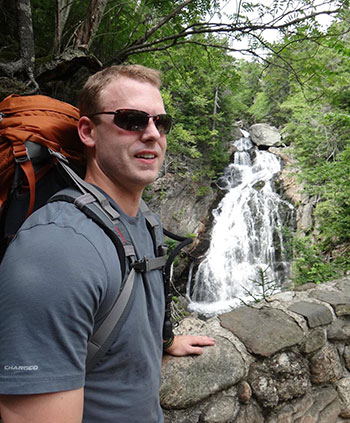 I'm originally from Kansas and moved to New England to be closer to family after a stint in the Navy. Today I work in devops architecture all day and spend my free time disappearing into the outdoors and getting far away from the buzz of electronics.

I spend most of my time hiking, rock climbing, cycling, canoeing, and kayaking.

My earliest outdoor memory was a fishing and camping trip with my father when I was a little kid back in Kansas. I clearly recall the campfire at night followed by waking up in our old dome tent and eating Hostess cupcakes for breakfast with my dad.

A few years later I started spending my summers at Winona Camps for Boys in Maine, where I quickly got hooked on rock climbing, backpacking, and kayaking.

I've found that mornings are often the most interesting in the woods, or at least that's when the local wildlife is the most friendly.

To begin, the first time I climbed Mt. Katahdin was as part of a group hike with Camp Winona. I woke up in one of the lean-tos at the Chimney Pond campsite to what I thought was spitting rain. I looked up to see a giant furry nose sniffing me and my friends. A moose had wandered into the campsite to investigate us! After a few good whiffs he decided we weren't as interesting as the pond itself and moved along.

Years later, actually just two years ago, I was hiking with my friend Bryan in the Smoky Mountains when I was woken up by what I assumed was Bryan tugging on the guylines of my hammock. A young elk had seen my giant green hammock and decided it looked tasty. Bryan witnessed the whole thing and, rather than shoo the elk away, grabbed his camera and caught it on video. 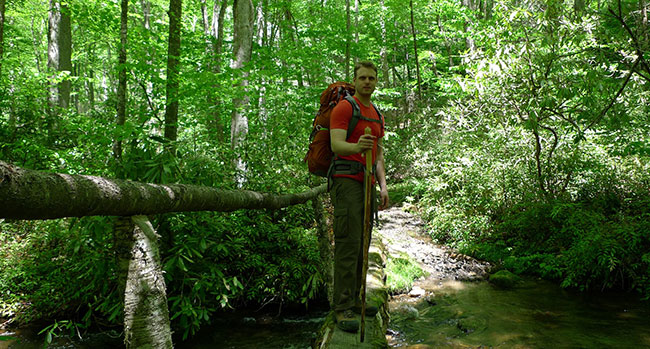 My favorite spot outdoors is actually a remote dock on Moose Pond in Bridgton, Maine. When I was a counselor at Winona Camps, I used to spend my evenings lying out on the dock and watching the stars. Being so far out into the woods, we were completely isolated from the light pollution of nearby cities. This is the best view of the night sky that I have ever found.

A few years ago, I was climbing Mt. Katahdin (in Maine) with a few friends when a sudden storm rolled in and covered us in cloud. Our visibility on the summit went down to about twenty feet, and all around us the mountain appeared to transform. Something about the diffuse light of the fog brings out the colors in the rocks and alpine plants.

What had appeared to be gray stone was suddenly a mixture of pink rhodonite and granite. Plants began to stand out bright and green against their rocky background. The fog continued for the whole length of the Hamlin Ridge Trail until we started our descent. At this point, the clouds finally broke and gave us one of the most spectacular views I have ever seen. 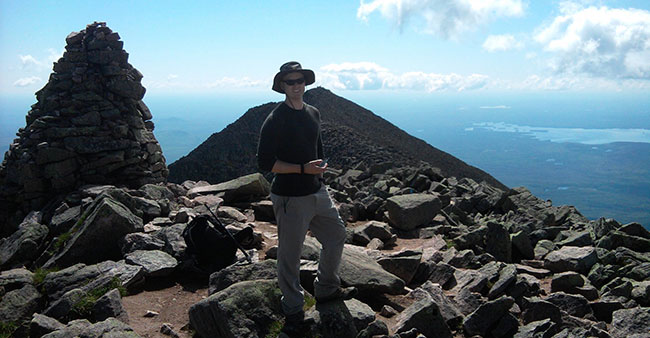 Do you have any outdoor plans or goals you want to share?

I have always wanted to hike through the Highlands of Scotland.

On my ideal day, I would hike into the woods until my legs refuse to carry me any further. I'd find a clearing and set up a small campsite. I'd sit in my tent or hammock and read until the sun started to set, and then I'd sit by the campfire and relax with my hiking partners until it was finally time to drift off to sleep.

I have always been a bit of a gear and gadget junkie. I enjoy trying out new gear, but also really enjoy sharing my experiences with other hikers, cyclists, kayakers, etc. If I know of a product that will help people enjoy the outdoors, I like to share it.

My favorite piece of gear would have to be a Mora knife I received as a groomsman's gift from one of my best friends. Of all the pieces of gear that I own, a solid knife has always proven to be the most useful. This one has stood up to a fair amount of abuse and has sentimental value to boot.

Got any interesting gear stories?

Several years ago, I decided to go ultralight, but did so without proper gear knowledge or testing. I abandoned my incredibly heavy, but thoroughly weatherproof, North Face Fat Frog tent in favor of a small Tarptent Rainbow. This was a fantastically comfortable little tent that set up in no time at all. Unfortunately for me, it was my first foray into tents for which seam sealing was an option. An option I had not selected.

On our first night in the woods it poured rain. Shortly after going to bed, I felt a little drip. After a few minutes, the drip developed into a steady stream of cold water. Several failed attempts to patch the leak from the inside only proved to make matters worse and damage the tent, so I attempted to fix it from the outside.

At this point I snagged my rain pants on a tree and tore the leg open. After a few moments of jumping around swearing profusely, I ended up tossing the now-destroyed rain pants over the peak of my tent and spent a grumpy and chilly night inside. For the rest of the trip, our campsite consisted of one Coleman dome tent, one Eureka bivy sack, and one Tarptent with a pair of torn rain pants duct taped to the outside. 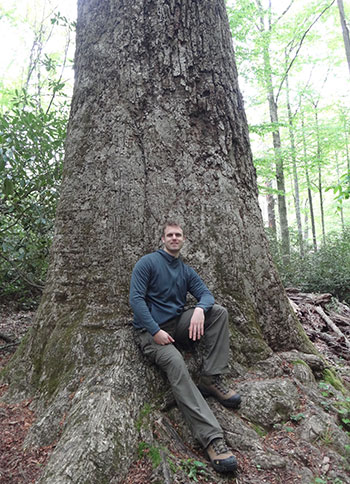 Brent in the Smoky Mountains.

Who has been your biggest influence?

As far back as I can remember, my father told stories about his adventures in nature. He taught me to appreciate and respect the world around us.

Bill Bryson's A Short History of Nearly Everything

"It suddenly struck me that that tiny pea, pretty and blue, was the Earth. I put up my thumb and shut one eye, and my thumb blotted out the planet Earth. I didn't feel like a giant. I felt very, very small."

I left the military in 2010 due to a spinal injury. At the time, I couldn't bend at the waist and it was believed that I would never be able to bike or kayak again, let alone carry a heavy backpack.

One week after surgery for protruding disks, I started physical therapy again and also started seeing an acupuncturist. She was a miracle worker, and her treatments did more for my recovery than anything else I tried. Less than a month after my surgery, I managed to get back into a kayak. A few months after that, I did a short backpacking trip back up Katahdin (also my first foray into “ultralight hiking”).

Now I try to get out hiking at least once a week, I kayak a few times each year, and I average a few thousand miles per year on my bike (including an annual ride over Crawford Notch (N.H.) and Killington (Vt.). I do still have some small amount of back discomfort these days, but no worse than when I used to play football in high school. 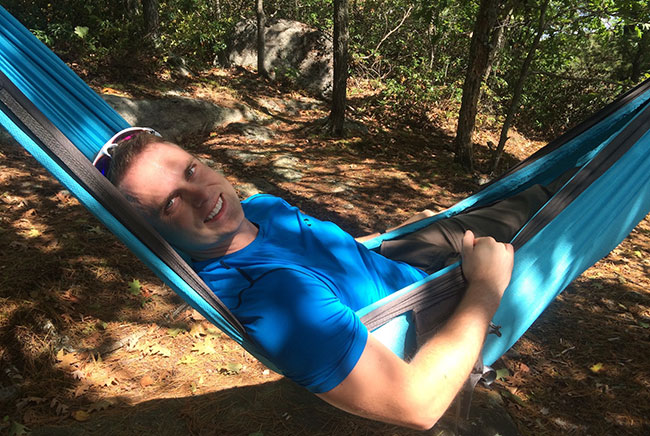 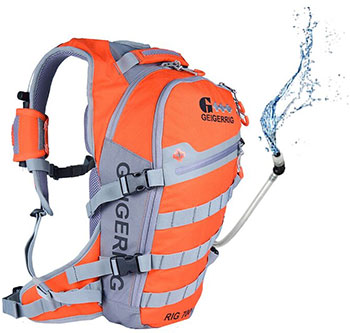 Congratulations, Brent! You win this month's featured Reviewer of the Month prize: a Rig 700M hydration backpack, In-Line Crypto Filter, and Nano Drink Tube, all thanks to the folks at Geigerrig ($188 value).

If the moose say you're ok, that's good enough for me. Enjoy your new hat!

Loved the happiest moment story. Glad to hear you shrugged off the doctor's proclamations about your ability to do the things you love too.

Love the stories!  And I love to hear other people's stories of the healing power of nature :D

Thanks for sharing your stories!

hmmm, devops and your name is Brent...were you the constraint in The Phoenix Project? :) (not funny if you haven't read the book)

@ Patrick, I am not the same Brent, though the similarities to my last role are remarkable...

Brent, I went out and bought the same Morakniv you have after reading your review. I was so impressed that I actually went and bought 4 more models and am in the process of field testing them. They really are great. Thanks for your great reviews.