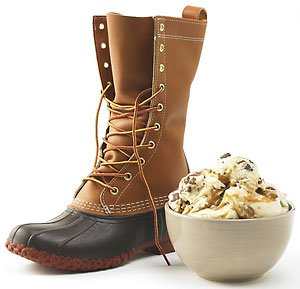 Welcome to spring, or as we call it in Maine, mud season. In honor of spring and its 100th anniversary, L.L. Bean and Gifford's Ice Cream have created a Muddy Bean Boots ice cream flavor, inspired by the iconic outdoor boot.

L.L. Bean is offering a line of 100th anniversary, limited-edition products, including: 10 wood-and-canvas Old Town Canoes ($7,500), a handcrafted canoe paddle made from softwoods reclaimed from the bottom of the Penobscot River ($169), and handmade white ash wooden snowshoes ($329).

And, naturally, there's a 100th anniversary Maine Hunting Shoe with classic rawhide laces ($139). A hundred years ago, Leon Leonwood (L.L.) returned from hunting in the Maine woods with cold, damp feet and an idea, which became the Bean boot. The 2012 boots are designed to replicate the first pair L.L. Bean invented and reintroduce the red brick bottom found on early versions.

L.L. Bean and Gifford’s will donate a portion of the proceeds from the sale of Muddy Bean Boots ice cream to Healthy Hometowns, a nonprofit Maine-based program that engages young people and their families in active, healthy lifestyles through outdoor recreation.

Love those classic Maine Hunting shoes also known as Bean Boots. The canoe is a bit pricey for a new w/c boat, but doubtless it's made with a little extra care.

Too bad I'll not get partake of the ice cream out here in Seattle.

I want to try some too. I heard they sold out the first batch already. Hopefully they'll be replenishing the stock.

I had a pair of those boots when I lived in New England.  I got them as a gift from a friend who bought them at the LL Bean store in Freeport.  With some sadness, I sold them after moving to CA, because I wasn't using them.  When I go to the Sierra I need a better grip (sole), and I certainly don't need boots like that around San Francisco.

IIRC, I sold the boots on eBay.  Maybe I should have eaten them instead.

I bought a pair of Bean Boots to wear on a film shoot on Kauai years ago. Mail ordered them over the phone and had them delivered to my hotel once I realized how bad the location was. Great for that kind of work under those conditions.

Man you guys got cool stores in the US. Wish there was an L.L Bean in Montreal...

I had a scoop today. It was good, though it's hard to go wrong with brownies and caramel in ice cream. 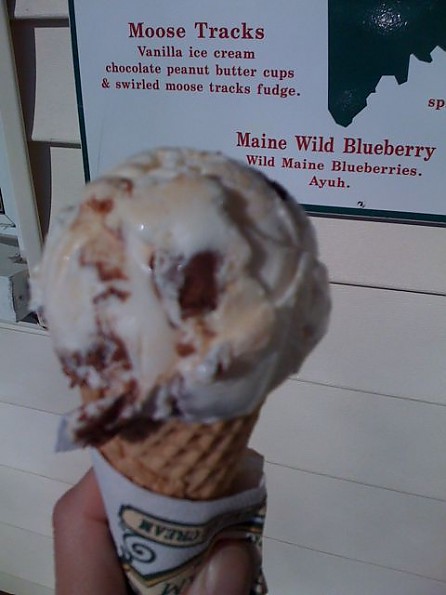 Now that I'm looking at the picture I want more.

If I keep reading this thread none of my clothes or my pack is gonna fit me. Between this and Ed G's Haluski query directed to me I am toast.

Thanks alot(buries face in Ben & Jerry's while chompin on Cheese Doodles)...

Mmmm, and Maine Wild Blueberries.  Now that brings back some memories ... raking blueberries for Wyman's.