Congratulations to long-time community member Bill S, author of April's most helpful gear review. The Trailspace community voted Bill's review of the CamelBak All Clear water purifier the most useful review of the month. He wins a Trailspace goodie pack for his efforts.*

Write your own helpful gear reviews with Trailspace's redesigned and enhanced "write a review" form, and you might be next month's most helpful reviewer.

When and how did you get interested in going outside?

I’ve been in the outdoors all my life. I grew up mostly in a village on the Akimal O’Odham reservation (Sonora Desert, Central Arizona). You could walk out the door and in 15 minutes be out of sight of any houses or other signs of “civilization.”

How have you stayed active outside at such a high level for so long? Any wisdom on staying active as you age?

Since my family was very much into the outdoors, we were out camping, hunting, and fishing a lot of the time. Even after we moved in to the “Big City” and later to California, our family outings were camping, plus I was active in Boy Scouts from the time I was old enough to become a Cub.

I started technical climbing in 1953, with Mt. Whitney being my first High Point, and, a few days later, Mt. Sill being my first real climb. My father had been a founding Assistant Scoutmaster of Troop 1, Universal, Pennsylvania. It’s in my blood!

Plus, Barb (my spouse of some 46-plus years) grew up in a family of backpackers. We met through our university climbing club, with our courtship including a 60-mile backpack through Yosemite’s backcountry. Our son was brought up in the outdoors as well. He was snow camping before he could walk. His first backpack (where he carried a bit of his own gear, including the 10 Essentials) was at age 3, in the Canadian Rockies.

Staying active at a high level? It doesn’t seem like a high level. If I had my druthers, I would be out in the hills, climbing every day. The “secret” is just get out there and do it.

Why were you motivated to review the CamelBak All Clear?

Seth, Trailspace’s Chief of Gear Reviews (my title for you), knew that I have long been interested in water safety and gear in general. I had seen UV as a sterilizing technique over the years and used a SteriPen for a number of years.

The CamelBak All Clear appeared to be a very promising new approach. So when Seth asked if I might be interested, I leaped at the chance. And I am glad I did! (Read Bill's All Clear review.)

What are some of your other favorite pieces of equipment?

Those pieces of gear that contribute to a safe and memorable trip:

What is one of your favorite outdoors destinations?

One? That is too limiting! Big mountains with challenging routes, the granite of the Sierra, Cascade glaciers, Alaska Range, European Alps, Peruvian and Chilean Andes, Tanzania. 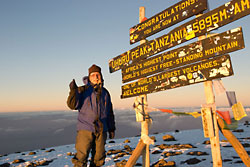 Bill on the summit of Kilimanjaro. (Bill Straka)

When I was growing up, my father had a carving on the wall, quoting an old Pennsylvania Dutch saying, “Ve get too soon oldt, und too late schmart.”

Like most kids, it took me a long time to appreciate that. At some point, I realized that many people in my life had had a significant influence on me, in terms of knowledge, skills, and maybe even some wisdom. Add to that more than a few things learned the hard way. And that told me that I, in turn, have the responsibility to share some of that knowledge, skills, and maybe even some wisdom with others.

I was given a coffee mug that has this quote: “A hundred years from now, it will not matter what my bank account was, the sort of house I lived in, or the kind of car I drove. But the world may be different because I was important in the life of a youth.” That lays an important responsibility on us OGBO (old gray bearded) ones.

Hopefully, in terms of gear, we have gained some insights that help in making meaningful evaluations of all the new gear that seems to appear daily, and sort out the truly useful and genuine improvements from the things that are “just different” with no added utility or dependability. “New! Improved” often is neither.

At the same time, you have to approach gear, and life itself, with a sense of humor. As I often say, “Life is too short to take it seriously.” Hopefully, in reading my reviews and other posts, people will take the factual information seriously and be amused by the humor in the rest.

*Besides Trailspace glory, Bill gets a goodie pack with an Ibex Zepher Skull Cap with Trailspace logo, a Trailspace pint glass (for après-backcountry use), a SealLine iPad case, energy bars from ProBar, and Trailspace stickers.

Wondering how you can be as lucky as Bill? Write a great gear review of your own with the redesigned and enhanced "write a review" form. Next month the Trailspace community will recognize another reviewer, and it could be you and your gear review.

I love the older pictures. Thanks for sharing them.

You have to admit the old school climbing photos are so much cooler looking than modern photos.

*Besides Trailspace glory, Bill gets a goodie pack with an Ibex Zepher Skull Cap with Trailspace logo, a Trailspace pint glass (for après-backcountry use), a SealLine iPad case, energy bars from ProBar, andTrailspace stickers.

Do you sell Trailspace swag or is this only for gift packages?

OGBO, I really enjoyed your review of the all clear. So much that I went ahead and bought one(have yet to use it.)

You have a very substantial wealth of knowledge when it comes to the outdoors which I personally have learned a great deal from and for that I thank you.

I always look forward to your posts and responses. Even if it is a subject that may not be of interest to me I still read it because I have found more times than not I can take something from it... Even if its only a smile.

Hey, we could all use a few of those on a day to day basis right?

Your Camelbak All Clear review is very informative, well written, and I can see why everyone would find it helpful. I have put one on my "to buy" list.

I also want to say that after much use & abuse I have finally retired my old  GPSR. Before I could do that I had to find a replacement of course, which in turn meant I had to read up on the subject and wade through reviews.

Your many posts on the topic of GPSR's & navigation in general have been a big help in my decision.

Last week I got a new Delorme PN 60w.

Thanks for all the help,

Thanks to all for the kudos. It warms the cockles of the cold heart of an Official Member of the Ancient and Dishonorable Society of Curmudgeons {8=>D

To expand a bit on the many people who influenced me, some were (and continue to be) famous and some were (and continue to be) obscure. Some knew they were having an influence, and some will never know. Beside my parents, one is considered to be a very famous American hero, immortalized in a well-known statue, who spent some time in my childhood home. Another was a famous (or infamous, depending on your opinion of his politics) politician, who pinned my Eagle Scout badge on me (one of the very few honest politicians I ever met). But many of the lessons came from almost everyone I ever had contact with in person or virtually (including all the posts I have read on Trailspace - I won't say which taught me things that improve me and which taught me things NOT to do or say {8=>O).

Keep in mind - the day you do not learn something new is the day you should go down to the undertaker's and turn yourself in. In the meantime, be very aware that everything you do and say WILL have an effect on everyone who witnesses you (including virtually on the Web) and those who pass places you tread in the most remote parts of the planet, consciously or not - strive to Leave No Trace, because whether you leave the place pristine or trashed, those who pass by after you may be inspired to do the same.

Congrats to The OGBO! :D ... one of those who's reviews are super helpful.

Do you sell Trailspace swag or is this only for gift packages?

Thanks for asking, Alan.

Yes, we usually do have Trailspace goods (mainly hats) for sale, through a retail partner (we don't sell anything directly). The Trail Runner Cap is the current version offered, and the one given away the most.

However, it's getting a redesign right now, with the updated logo. So it's not available currently.

In the future, I'd also like to offer the Ibex skull cap and the pint glasses for sale, for members who want them, once we have new batches with the logo.

Stickers are always free. Email your mailing address to stickers@trailspace.com.

Am I the only one who has not seen the goods page until now?

Am I the only one who has not seen the goods page until now?

I had not viewed it either until now.

thanks for all your reviews Bill

Hey Bill! Great thing you got this recognition. And though I am not a youth, you have made a difference in the life of this old chubby girl who sought a dream and you assisted in giving her the knowledge she needed to do it! Was great to meet you too..and your lovely wife and bheiser1 as well!