During his record-breaking trek to the highest point in every state this summer, Denver science teacher Mike Haugen, 31, left behind a trail of virtual breadcrumbs. From mountains like Mount McKinley in Alaska to comparatively lower highpoints in Florida, Louisiana and Rhode Island, he recorded video, shot hundreds of digital images, and blogged about avoiding bears, dodging lightning strikes and climbing some highpoints in flip flops while using heavy boots and parkas on loftier peaks. 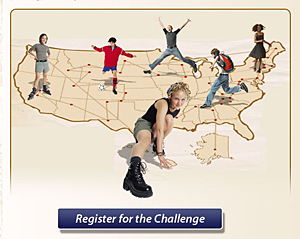 Now it’s time for kids from elementary to middle school grades to follow his journey online in a four-month effort to get America’s youth to participate in outdoor activities on a daily basis.

The Coleman 50 States in 50 Days Challenge allows kids to progress from one virtual highpoint to another…but only after engaging in outdoor physical activity for at least 60 minutes or by recording 10,000 steps in a day. Ride a bike, hike through a park, jog or go camping, and they can move online from one state to the next. That is the goal of the challenge – get kids outdoors and active – for Haugen and the program’s sponsor, The Coleman Company, Inc.

A printer-friendly activity log and U.S. map are available to allow students to start from any state and keep track of their daily progress. There’s even a personal avatar they can create and customize as they move across the country.

Schoolchildren who follow Haugen’s path and reach all 50 highpoints in this online adventure receive a commemorative souvenir and can print a personalized certificate of completion.

The top schools with the highest percentage of students who complete the entire hike (all 50 segments) will receive a souvenir from Haugen’s 50 States in 50 Days Adventure.

The educational Coleman 50 Days in 50 States Challenge, which was designed by PE Central of Blacksburg, Va., began accepting registrations at http://coleman5050.pecentral.org on Aug. 21. Students can start logging activity on Sept. 1. Teachers will be encouraged to include the challenge in their curricula so that entire classrooms can participate together as a team. The online challenge continues through Dec. 31.

Participation is open to schoolchildren as well as individuals. For inquiries: pec5050@pecentral.org.

Haugen’s adventure across the country, also sponsored by Coleman, ended at 11:55 a.m. local time on Friday, July 25, 2008, when he reached the top of his 50th state highpoint, 13,796-foot Mauna Kea in Hawaii. Along with climbing partner Zach Price, 30, a Seattle architect, the pair established a new record for the fastest ascent of America’s highpoints with a time of 45 days, 19 hours and 2 minutes. Ben Jones of Lynnwood, Wash., set the previous highpoint record in 2005 with a time of 50 days, 7 hours and 5 minutes, according to the records maintained by the Highpointers Club (www.highpointers.org).

This is the second year of a Haugen-Coleman adventure program to challenge school kids to get outdoors and to learn at the same time. Last year, more than 7,000 kids followed Haugen along on an expedition to Mount Everest, which he summited in May 2007, then participated in a rescue on the way down.