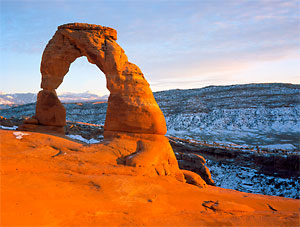 Get ready to hike, climb, and explore your public lands this weekend. National parks, national forests, Bureau of Land Management areas, and other federally managed lands will remain open for outdoor business, now that a government shutdown has been averted.

The short-term spending measure will last through next Friday, April 15. A final agreement for the remainder of the fiscal year is expected to be approved by then.

Even with the threat of a shutdown seemingly over, hikers, backpackers, and climbers may be left wondering what exactly a shutdown would have meant for them.

Here's what we learned about what could have happened, and the potential impacts of a shutdown:

David Barma, Chief Spokesman for the National Park Service, has been on the job since 1995, and has witnessed two government shutdowns so far.

According to Barma, if the government shutdown: 394 parks, 84 million acres, would be closed. This includes all parks — the big scenic parks in the West to the National Monuments in D.C. All closed. All special events would be canceled and all permits will be rescinded.

What does “closed” mean? Would people coming to hike in parks be arrested?

All entrances, parking lots, and facilities that can be secured would be closed. We ask visitors to respect the closure of National Parks. If visitors were found in a closed park area, they would be asked to leave.

What about people already in parks?

Guests in hotels and campgrounds would be asked to leave within 48 hours. All of the estimated 800,000 visitors on NPS lands would be turned away.

What about people in the middle of backcountry treks?

People out in the backcountry, in Yellowstone for example or in the middle of rafting the Grand Canyon, wouldn't be bothered. We wouldn't send people into the backcountry looking for them. We'd hope they come out of the woods to find these problems resolved.

Which park employees stay and which leave?

According to Barma, www.nps.gov, which receives approximately one million hits per day, would have gone offline. This means that travel planning, park passes, permitting and campground reservations would cease.

The National Parks Conservation Association’s legislative representative John Garder offered his perspective on an NPS shutdown. According to Garder, closing parks would primarily impact visitor's experiences with the parks.

"We can't lose sight of the fact that NPS' budget was already cut by $100 million in the last continuing resolution," said Garder. "Of course, the parks can't adequately maintain resources during the shutdown, but we can't forget that ordinary federal funding wasn't sufficient to begin with. (Read the NPCA's FAQ: What Will Happen To Our Parks?)

What about the Appalachian National Scenic Trail, which is overseen by the National Park Service? Could all 2,175 miles of it ever be closed, just like national parks?

Javier Folgar, Marketing and Communications Manager for the Appalachian Trail Conservancy, voiced doubt that the entire A.T. could be closed. Much of the A.T. crosses state parks, game lands, county parks, and other lands not managed by the federal government. And with hundreds of miles of trails with numerous side trails with no controlled access, closing it would be difficult.

"There is some question as to the level of access hikers would find on the A.T. in national parks” in the event of a shutdown said Folgar. But ATC was working with the National Park Service to determine the effect of a shutdown on the trail.

Access to Bureau of Land Management lands would have been less restricted than to national parks. “People will still be able to hike, fish and visit BLM public lands," said Jeff Krauss, Public Affairs Division Chief at the BLM.

For example, boat ramps without controlled access would be open, but no new permits would be issued, and bathrooms would be closed.

The effects of a shutdown would be wider ranging than park gates being closed and the cancellation of the National Cherry Blossom Parade. In April, national parks average 805,000 visitors per day. Gateway communities would feel a significant economic impact if the parks closed, potentially even due to the threat of closure alone.

According to the National Parks Conservation Association, the 1995-96 shutdown cost communities surrounding national parks $14 million dollars a day. The advocacy group and NPS estimate the total economic cost of another shutdown could be more than $32 million a day.

Many organizations that depend on funding or supervision from the federal government would be disrupted by a government shutdown.

Janet Ross, Executive Director of the Four Corners School of Outdoor Education in Utah, operates the Canyon Country Youth Corps, crews of primarily Navajo youth that maintain natural and recreational resources in the Four Corners region. “For at least two projects, we need to have agency staff supervising the crews," said Ross. "If the staff don't come to work because the government shuts down, at least sixteen kids won't be able to go out and work.”

Want to learn more? Check out these government contingency plans.