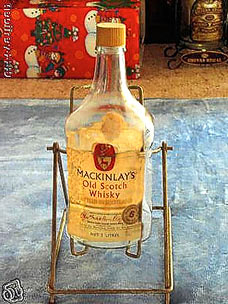 A vintage McKinlay's bottle of the same era. Shackleton's may a bit worse for wear.

Shackleton buffs take note. Two crates of McKinlay's “Rare Old Whisky” have been buried in the Antarctic ice for a century, 97 miles shy of the South Pole. Adding to the aptly-named Scotch 's prestige is the fact that it was left behind by legendary explorer Sir Ernest Shackleton when he was forced to abandon his South Pole expedition in 1909.

The crates originally were found in January 2006, encased in ice under the floorboards of the Nimrod Expedition hut Shackleton built, but were not moved at the time, due to being deeply embedded. Whyte & Mackay, owners of McKinlay and Co, have asked a team of New Zealand explorers heading out on a January 2010 expedition to return a bottle or sample of the whisky this time around.

New Zealand Antarctic Heritage Trust will use special drilling tools to retrieve a sample of the vintage Scotch, which they'll turn over to Whyte & Mackay's master blender. The rest must remain where it is, according to Antarctic conservation guidelines. Word is the distillers will try to recreate the original whisky from 100 years ago.

Al Fastier of the Antarctic Heritage Trust said he would not be tempted to sample the Scotch, preferring to allow the spirits to retain their mystique. “It would be terrible to sample it and find that it was off,” he told Radio New Zealand. “I personally think they must have been left there by mistake, because it's hard to believe two crates would have been left under the hut without drinking them.”

FYI, the expedition's main purpose is to carry out restoration work on Captain Robert Falcon Scott's Terra Nova hut, not to drill for whisky.

Oh, Yummy! Where exactly is that hut? LOL