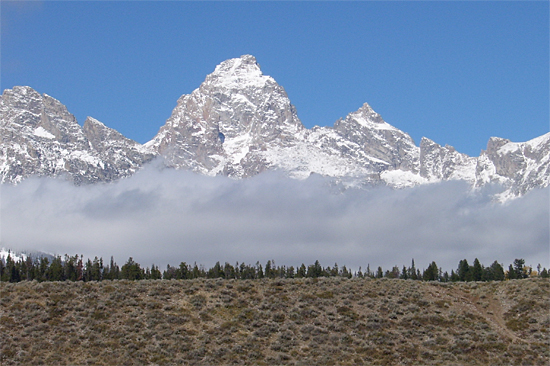 This is sad news from Grand Teton National Park.

According to the Jackson Hole Daily, 16 climbers were rescued by Grand Teton National Park rangers on Wednesday after a lightning storm struck on the 13,770-foot Grand Teton. All 16 sustained some injuries, from bumps and bruises to burns and secondary trauma. The body of a 17th climber, who died after being struck and knocked off the mountain, was located today. Brandon Oldenkamp, a 21-year-old college student from Iowa, was wearing a harness, tied into a rope, and on belay when he was hit and disappeared off the mountain.

The search and rescue operation by climbing rangers used two helicopters and is believed to be the largest in Grand Teton National Park since the early 1960s. The climbers were climbing in three separate parties and all above 13,200 feet.

God bless search and rescue crews. Those folks are really unsung heroes. I may have to give it a try someday. Until then, my condolences to the family of Brandon and my heart-felt thanks to those who risked their lives to save others.

It must have been hell. Imagine a lighting storm so violent it affects three separate climbing parties thusly.
Ed

A great salute to the rescuers who had risked their life in order to save the climbers from the disastrous situation. But for the guy who had lost his life, its a sad news indeed!!

How very tragic. Praying for the survivors and the family and friends of those who lost their loved one. Many thanks to the rescue crew(s).

I was in the Tetons when this happened. I was hiking Paintbrush/Cascade Canyons and watched the rescue helicopters flying all afternoon. We had a few lightening strikes very close, but nothing hit closer than 1/4 mile.