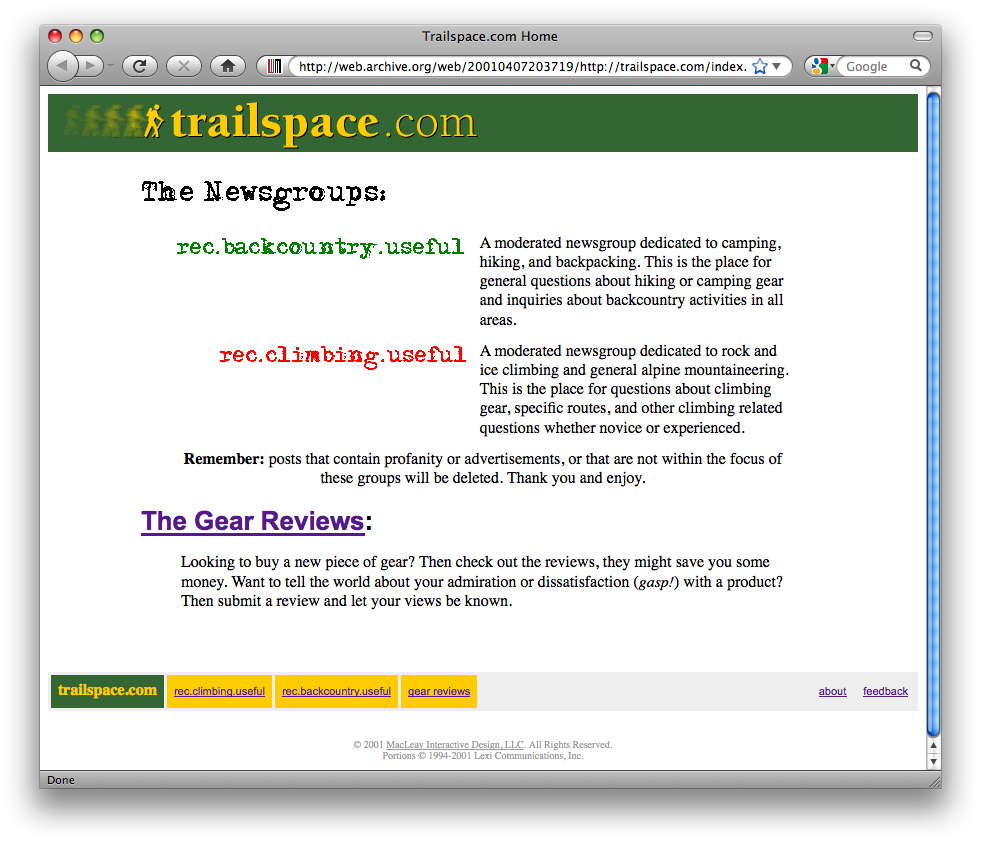 If this screen shot looks familiar, congratulations! You've been part of the Trailspace backcountry community for a decade.

Trailspace launched on March 14, 2001 (a Wednesday), with two forums (backcountry and climbing), a few thousand semi-organized gear reviews, and a number of you as our first members.

To celebrate turning 10 we're holding an essay contest. Here are the quick details.

How to enter: In 600 words or less (photos and videos are encouraged) write about one of the following topics:

Where: To submit an entry, start a new topic/thread in the Trailspace Turns 10 Essay Contest forum.

Prizes: We'll award $100 gift certificates to outdoor retailers for the very best entries. Members will get to vote and help us pick the winners in March.

Rules: You must be a member of Trailspace to enter. Not a member? Join now. One entry per person. Void where prohibited. Not open to employees of Trailspace or their immediate family members.

Happy Birthday, Trailspace! You have been my go-to source for gear since I found you! Here's to many more years! Cheers!

I did a look back through the archives. My very first post was Mar 19, 2001, at 11:49 AM.It was about frozen tent poles and loss of elasticity in the bungees (a question that pops up again from time to time).

It looks like my first "advice from the Old Greybearded One" on the Backcountry Forum (rec.backcountry.useful) was posted on Mar 21, 2001, in response to "John", who wanted to take his 9 year old son backpacking. One of the earliest discussions was started on Mar 15, 2001, on that frequently recurring topic, toilet tissue and how to dispose of it (13 responses, so popular even back then, or maybe it just continues to be of great concern). There are a number of threads that got no or one responses.

In rec.climbing.useful, the first post (again by Dave) was at 8:45 on Mar 14, with no responses (it was just a "Trailspace is live", just like the one on rbu).

The first long thread on rcu was a question on altimeters on Mar 20, answered with a looonnnnngggg response from the OGBO (nothing new about that, is there?), and 13 responses to the OP, which is a lively set of light-hearted exchanges that actually contain some substance in the gear mongering, among Bill S (OGBO), Damo (Damian Gildea), and Macca (Paul MacLaman), with some comments from Danhedonia (long since vanished) and "pbh", the OP (listed as a guest, so I guess he never joined, at least under that user name). And on Mar 22, "Sparky" asked for advice on "almost everything" - Trailspace needed a "Beginners" forum way back then.

Lots of progress, lots of changes, lots of stuff that is just the same.

Oh, yeah, my inspiration for looking back through the archives was to get some inspiration for my Prize-wining Essay on "10 Years of Trailspace". But somehow, I still don't remember what I was doing in the outdoors in 2001. Ten years is too long in the past. And besides, I'm probably disqualified from participating anyway.

It's great to still have you here providing good info and your long responses!  Thanks to everyone who helped keep this site going.  It has been an extraordinary cache of info about what [we] like to do in the outdoors!  I would enjoy writing an essay though I have not been here for all that long, it might still be fun.

I'm glad this Forum was started and has lasted. Its a great place to share knowledge, ask questions and learn. And all that encourages more to get off the couch and go out into the woods and wilds and explore.

Thanks, everyone. I'm glad you're all here too!

And, Bill, you are not disqualified from entering the contest. So we now expect that award-winning essay from you.

I encourage everyone to enter. Photos and video essays work too. What have you got to lose, besides the chance to win a $100 gift card for gear?