It's an Ueli Steck moment 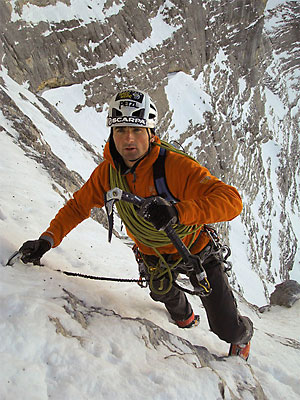 Setting speed records in the Alps and Himalaya. Appearing on magazine covers and in inspiring YouTube videos. Helping design climbing gear for his sponsors. Speed alpinist Ueli Steck and his feats seem to be everywhere lately.

Steck's not just speedy and efficient in the mountains. At last winter's Outdoor Retailer show, I was told that Steck helped design this knife for Wenger, that Micro Stick for Leki, the Mountain Hardwear gear for this spring's Project Himalaya. I wondered if this was why he had to climb so darn fast.

He keeps popping up. This summer, on a Swiss train, I was treated to a rousing short video depicting Steck's 2008 record-breaking solo speed climb of the Eiger's North Face (2:47:33).

OK, OK, I was on the train that runs through the Eiger, so it was hardly surprising. But still, there was Steck, again, breaking his own 2007 speed record. (This April, Dani Arnold set a new record.)

Steck has been prominent in the climbing community and Europe for a while, but his prominence is soaring. Even my 7-year-old is enthralled and would like Mr. Steck's autograph, please. (p.s. Is there a fan club?)

It all adds up to an Ueli Steck moment.

If Steck mania hasn't hit you yet, check out the clip below from the 2010 film Swiss Machine by Sender Films.

The hard-working Steck will be at Outdoor Retailer next week, talking about his climbs and his gear, like the full kit he helped Mountain Hardwear design for his Himalaya Project (hold the extra features). Mere mortals will be able to buy similar versions of Steck's down jacket and pant, midlayers, baselayers, backpack, tent, and sleeping bag in 2012.