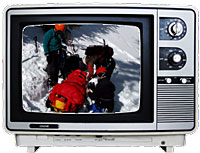 Ever think that the mass media’s portrayal of the outdoors and its “extreme” activities bears no resemblance to your own enjoyable hikes, backpacks, and climbs? When the mainstream media does cover the outdoors, the stories tend to feature life-and-death struggles rather than the personally fulfilling, but far-less-dramatic, aspects of regular outdoor travels.

So, do these portrayals affect people’s interest in getting outdoors, where bears, avalanches, and other scary things might lurk in the dark?

Steve Sergeant of The WildeBeat explored this issue in his podcast last week. The program included comments from Richard Louv (Last Child in the Woods), Fitz Cahall (The Dirtbag Diaries), Ryan Jordan (Backpacking Light), and long-distance hiker Andy Skurka. You can call in your comments for part two, which airs later this week.

Alicia, thank you for listening. Part 2 of "Scared Indoors" provides what you might find to be surprising conclusion: www.wildebeat.net/index.cgi/2008/02/28#E127

The clickable URL for the combined 2 parts is http://www.wildebeat.net/audio/WildeBeat-E127-extended.mp3

Steve, join Trailspace and visit often. Your knowledgable and balanced comments would be most welcome here.

Thanks for the update, Steve.

I enjoyed the broadcast and found it right-on. It's an interesting topic and has started some discussion in our own community forums:
https://www.trailspace.com/forums/backcountry/topics/43440.html